How could a breathable ultra-high pressure atmosphere form?

Some background: I'm developing a world that could, theoretically, be inhabitable by humans (with a high enough recruitment success to at least keep a stable population), randomly determining environmental parameters based on the range our physiologies can tolerate. This world has 50 atm of pressure at the inhabited area I'm designing, and a mass of just $0.11M_{\oplus}$ (so a surface gravity of 0.48g). It's too small for plate tectonics, but has enough residual heat to create a magnetic dynamo.

Based on what I've been able to find online, in order for the atmosphere to be breathable, I need something like:

The reasoning behind such a high concentration of helium is in line with heliox mixtures used in saturation diving, where the inert gas helium is used to "dilute" oxygen to a breathable partial pressure. It's the partial pressure of oxygen (here 50 atm x 8% = 0.4 atm, or almost twice the partial pressure in Earth's atmosphere), not the volume or molar percentage, that determines hypoxia or hyperoxia.

Hydrogen might be a major constituent of the atmosphere if the planet was originally a mini-Neptune that lost most of its hydrogen and a lot of its helium. Oxygen shouldn't be much higher than the noted percentage due to flammability risks and oxidative stresses on life. The big concern with nitrogen, neon and argon is nitrogen narcosis (and similar nasty effects); nitrogen is pretty much maxed out here. CO and CO2 should be more common in a helium-dominant atmosphere, but are directly toxic to life, so we probably can't raise them any more.

(As a minor sidebar, some envelope calculations based on equation 1 in this article give me an atmosphere loss rate (instantaneous $\frac{dm}{dt}$) of $2.61\times10^5$ kg/s, which if projected out geometrically would give about 16 million Earth years until the atmosphere is gone. So uh, definitely not a stable situation in geologic time.)

One of the explanations I've considered for having a thick helium atmosphere despite the current low mass is that the planet was originally a gas giant (mini Neptune-type) that got knocked into a lower orbit by some sort of prehistoric collision/slingshot effect, where it began bleeding off its gas envelope like a giant comet. I'm not sure if the planet could have formed, though - would it make sense for it to have such a small rocky core?

How else could a breathable high-pressure atmosphere form?

You should be able to get this sort of helium-dominated atmosphere to form naturally by exposing the planet to the proper levels of ultraviolet radiation from its star. By tweaking the orbital and physical parameters, you should be able to strip the planet of its hydrogen while retaining most of its helium. A planet with a cold, dense atmosphere might be the optimal solution.

Gliese 436 b, as you mentioned, is an interesting case study and possibly the best example of a helium-dominated atmosphere like the one you're looking for. It weighs in at around 21 Earth masses, and the vast majority of that is likely to be solid, with an atmosphere-to-planet ratio of $M_{\text{atm}}/M_p\sim10^{-3}.$ This is far out of your desired range, but it's worth looking at anyway.

Hu et al. 2015 argue that Gliese 436 b, a Neptune-sized exoplanet, began with an envelope dominated by hydrogen and helium, as is expected for planets of that mass range. It orbits a red dwarf, and as such, it receives a healthy dose of both extreme ultraviolet (EUV) radiation, as well as x-rays (though these are, for our purposes, relatively unimportant). This EUV light energizes atoms and molecules in the atmosphere, increasing their kinetic energy until some have thermal speeds greater than the escape velocity. These then move free of the atmosphere, in a process called hydrodynamic escape. Hydrogen is lighter than helium, and so it is stripped away much more easily. Hu et al. calculated that by this process, Gliese 436 b could have had its hydrogen and helium atmosphere converted to a helium-dominated atmosphere on a timescale of about 10 billion years.

Unfortunately, low-mass planets are unlikely to maintain such high helium/hydrogen ratios! Figure 4 of the paper shows a plot of what Hu et al. call the fractionization factor, $x_2$. $x_2$ can range from 0 to 1; a value of $x_2=0$ means that the atmosphere is completely dominated by helium, while a value of $x_2=1$ means that the two gases are well-mixed. We can see that low-mass planets have severe difficult reaching low fractionization factors; even at $M_p=1M_{\oplus}$, the best we can do is $x_2\approx0.6$: 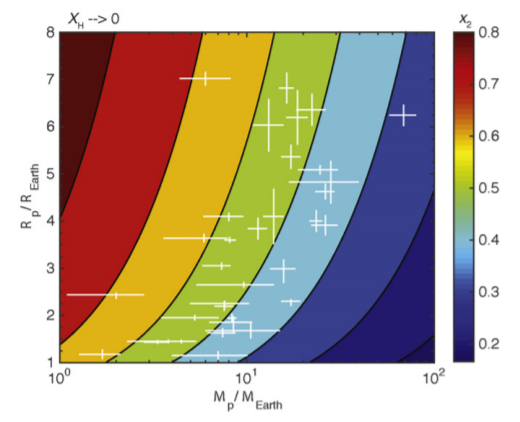 For an even lower-mass planet, I think $x_2\approx0.8$ is, unfortunately, reasonable.

We want this lower $\Phi_{\text{EL}}$ because then helium loss will be energy limited but hydrogen loss will be diffusion-limited, and will therefore depend on a different set of atmospheric physics. We may then be able to find-tune the hydrogen escape. The paper indicates that the scaled helium flux will be greater than the scaled hydrogen flux by the quantity $$\phi_{\text{DL}}=\frac{GM_p(m_{\text{He}}-m_{\text{H}})b'}{R_p^2kT}$$ with $T$ temperature and $b'$ the binary diffusion coefficient. We see that we can retain even more helium compared to hydrogen if we 1) increase the initial helium mass somehow or 2) decrease the temperature, as $\phi_{\text{DL}}\propto T^{-1}$. This should make sense; a colder atmosphere will make it harder for gases to escape.

On the other hand, thanks to the ideal gas law, a cold atmosphere means that we'd likely see lower pressures unless we drastically increased the atmospheric density. We could attempt to make ourselves a cold but extremely dense atmosphere, with high-density maintained perhaps by a high surface gravity and some method of replenishing helium. A massive rocky core would certainly help.

I think you are mixing two aspects here: the formation of the atmosphere and its enrichment in oxygen.

In order to have free oxygen you need to have some process continuously producing it, else it will be depleted by the reaction with other species. And since you have hydrogen, you don't need much to have a lot of water. On Earth that process is called photosynthesis and it's carried out by plants and algae. Before that it is accepted that our atmosphere was not so oxidant.

You can follow a similar path also here: this planet, initially with a reducing atmosphere (noble gases, hydrogen, methane and water), developed life which ended up enriching the atmosphere with oxygen.

Here‘s another alternative: the planet‘s solid core contains lots of reservoirs of frozen/condensed hydrogen, helium, nitrogen, etc. Perhaps the planet initially had no atmosphere and was just a ball of frozen rock until an alteration to its orbit (as you mentioned) or a change in the size of its star caused it to be heated up. At this point, frozen and condensed substances at its surface begin to melt and evaporate, forming an atmosphere (that is gradually diffusing off into space at the same time).

You would just need to make sure that the planet is receiving enough heat for these reservoirs to evaporate faster than the atmosphere can escape from the planet.

Good news: the heat of vaporization of helium is $21.125$ joules/gram, which is very low (compare this with water‘s $2257$ joules/gram). This means it should be able to melt and evaporate quite quickly, and possibly even outpace the disappearance of the atmosphere.

Bad news: this still isn‘t what you would call “geologically stable.” Eventually, the reservoirs will run out and the atmosphere will disappear. Even worse, as the reservoirs empty out, the planet’s mass decreases, causing gravity to lessen and the atmosphere to vanish at an even faster rate. However, it should last much longer (and be more believable) than a planet with nothing but a preexisting atmosphere.

Let's dive into the physics and see where that gets us. A the outset, I assert that I will make no attempt to estimate any ingredient to better than $\pm 10\%$ and the result may be off by a small factor because of this. I use the subscript "Coel" to reference the planet you describe.

Checking the Wikipedia's chart for atmospheric escape, at $300 \,\mathrm{K}$ (around room temperature), xenon won't go streaming off your planet, but carbon dioxide, oxygen, nitrogen, water (vapor), ammonia, methane, helium, and hydrogen will all escape (in rough order of increasing rapidity). From the chart, retaining helium requires temperature below about $150 \,\mathrm{K}$, which is quite a bit colder than I want to breathe.

One of the sources for that chart writes

It is also important to keep in mind that most of a gas will escape even if only a small fraction (say 5%) has a velocity higher than the escape velocity -- this assumes that there are no new sources of the gas from within the planet and that you are interested in times long after the planet has formed.

[Having produced a number of models, it is clear that having a stable atmosphere with this high pressure and low gravity is very tricky. It's far too easy for the (tightly) compressed spring of atmosphere to throw large fractions of the atmosphere off in the time it takes the compression wave to propagate down to the planet, reflect off the surface, and return to the outer layers, raising their speeds to greater than escape velocity. Having a stable column of gas 50-times heavier than that on Earth with half the surface gravity at reasonably close to livable temperatures is ... hard.]

A wizard did it

It might be the case that a very advanced civilization terraformed the planet that way, maybe because they originally come from a place with a very thick atmosphere. The low gravity might be because the place was a spa, retirement home or kindergarten (less gravity means less strain on the heart(s), less damage from knocking things and people over), or maybe because changing gravity too much is more expensive than changing just the atmosphere. This gives you the planet you want while keeping your Occam razor sharp.

That civilization may then have vanished (they died out, moved on to other venue, or hid in an iceberg when the fire nation attacked).

I believe certain bugs can breath underwater by using surface tension to wrap an oxygen bubble around them. The bubble then exchanges carbon monoxide and oxygen with the surround water to give them effectively unlimited breathing capability (I don't pretend to understand this well, see https://phys.org/news/2008-07-insects-oxygen-underwater.html for more).

Your atmosphere could do something similar, maybe a certain combination of the elements would "cling" to a human (maybe due to a static charge? I'm not sure if surface tension is applicable at this scale) and cause a few centimeters of breathable zone around them that constant renews itself?

Not the answer you're looking for? Browse other questions tagged biology planets atmosphere astrophysics gas-giants .

8
Breathable Mars?
12
Is it possible for life to exist on the core of a gas planet?
2
What effects would an atmosphere with the following composition and pressure have on humans? on the environment? what color would the sky be?
19
Could a moon or planet exist with "puddles" of breathable air in deep craters?
8
Are these atmosphere compositions for habitation in space plausible/do they cause problems I don´t see?
23
Plausibility of helium dominated atmospheres on super-Earths
20
What is my breathable atmosphere composed of?
8
Yellow sky with a breathable atmosphere?
6
What would be the consequences of an Earthlike Planet retaining helium in its atmosphere