How much sunlight can I get into my O'Neill cylinder and how much light needs to be artificial? 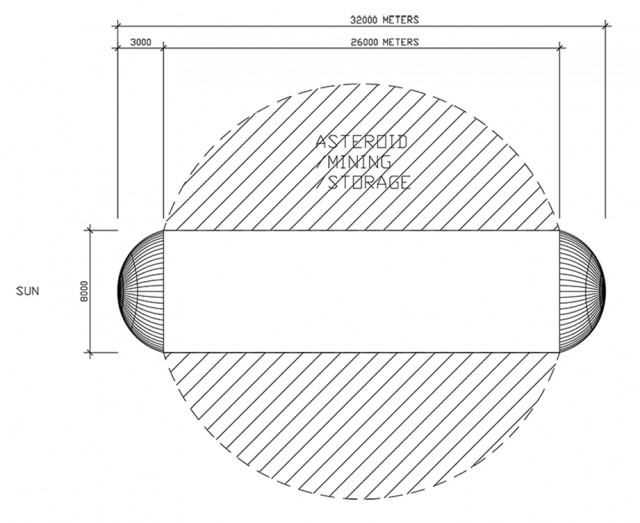 The cylinder is 32 km long in total, 8 km in diameter, with 3km long endcaps, resulting in a habital area with a length of 26 km (= and an area of cirka 754 km2). The main body of the cylinder is buried within a small asteroid with a diameter of roughly 26 km.

The end caps are windows into space in both directions, one of them tidally locked towards the sun, with a similar proximity of that of earth's. The windows (or at least the sun facing one) are closed for 8 hours within a 24 hour rythm, to mimick day and night.

There are two paired cylinders within the asteroid, with opposing rotation to keep them stable, but for the sake of the question we focus on one and the results will be copied into the other.

So the question is:

How far in reaches the sunlight?

Also, how much additional artificial light would be necessary to get "earth like daylight lightning" over the whole habitat? I guess an answer in percent would already be of help.

Edit: The habitat will be used as a nature conservatory, with plants and animals from a continental climate

Problem number one is that the light is coming in at rightangles to the surface, like sunset on Earth. It will be brighter than sunset of course because there's no thick atmosphere to traverse, but it'll still be horizontal rays and that means every object will cast a long shadow and if everyone wants to see a littl sunlight you'll need to ramp up the terrain from the sunward end to the far end.

Alternatively, you might be able to fit a big reflector into the space that ruins through the middle of the cylinder to reflect the incoming light evenly over the surface, but the problem you have then is that a) you've filled your sky with a load of stuff, reducing what you can do with your interior space and b) you're capturing light from a small area and spreading it over a large area, so it won't be as bright as you might like.

Solar irradiance at Earth's orbit is about 1366W/m2. You're collecting through an aperture with an area of about 50 million square metres, so that's 68.7GW. The total internal floor area of your habitat is ~654 million square metres, so the average irradiance will be about 105W/m2. That's relatively low... equivalent to average irradiance of the more northern bits of Europe, perhaps, but it isn't entirely gloomy. Note the use of the word average there, so it won't seem like a nice sunny mid-day as seen from Stockholm, but more of a gloomy overcast autumn day.

So the good news is that your solar intake isn't too bad, but it isn't very high and it won't be enough to generate a good facsimile of summer. You can fix this in various ways.

Adding an artificial light down the middle of the habitat driven by solar power is perhaps the most straightfoward option. You don't need to build any giant reflectors, and you get perfect control over the intensities and wavelengths of your light, and can easily dim or brighten the system to simulate seasonal changes. In this situation you can just make the endcaps opaque, which probably makes other aspects of the station's design and operation easier.

Alternatively, you can build light-collecting mirror arrays ("solettas") at either end of your habitat, and light-distributing mirror arrays inside your habitat. The area of these solettas can be much greater than the area of the endcaps, so you can collect almost arbitrary amounts of light this way. This allows you to replicate even equatorial desert insolation, if that's what you really wanted. Keeping the mirrors in good condition and operational, and keeping the internal transmitting and reflecting elements clean and everything aligned nicely will be more complex than the artificial light option, but it will work and if you're building a habitat on this scale anyway you should have more than adequate knowhow when it comes to space operations. 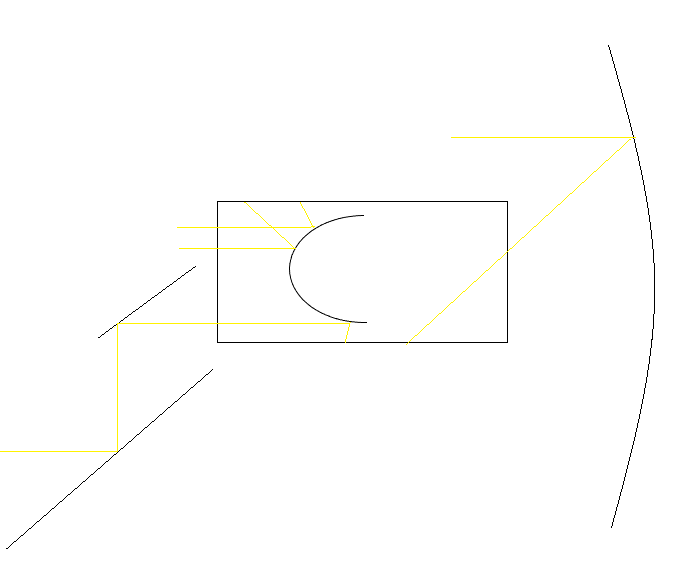 Here's a very quick and dirty diagram. I feel like it'd be better if I'd just scrawled it on paper, but no matter. Shown are two example light collecting arrays, and one internal reflector design, which will hopefully make the above text seem a bit clearer. I've omitted your asteroid for clarity.

Not the answer you're looking for? Browse other questions tagged science-based space-constructs light sunlight or ask your own question.