What is the best form of powered vehicular flight within a McKendree habitat? 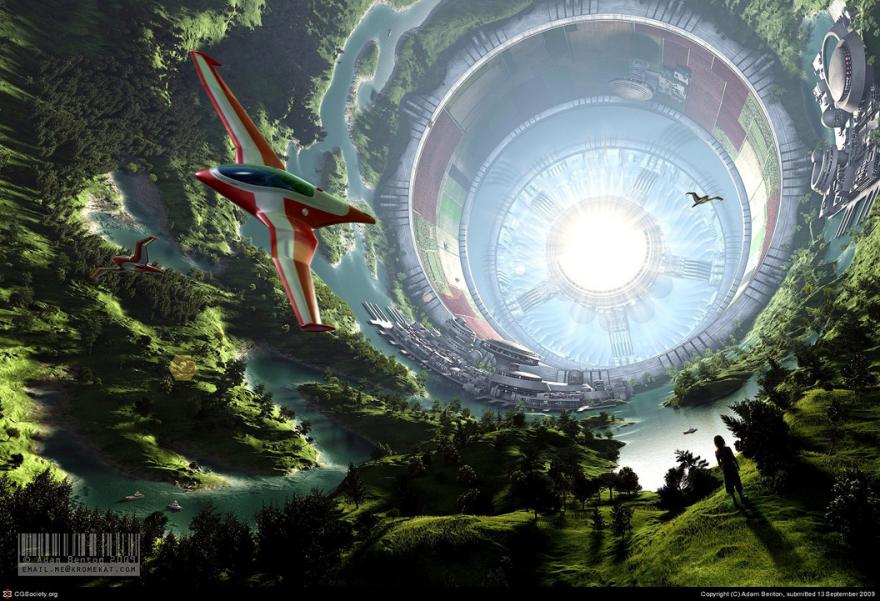 Once you take off your sense of 'down' will rapidly be at odds with the orientation of your destination, so a vehicle would need to reorient itself in flight in preparation for landing. I would think this rules out traditional fixed-wing aircraft, but I'm not sure how helicopter or drone/quadcopter vehicles would behave under these circumstances. Does this leave jet engines, simply brute forcing their way through the atmosphere, no lifting surfaces required, as the only viable model?

What method of flight would powered vehicles use to reliably navigate within this environment, safely delivering passengers to points scattered therein?

It seems like time for a mild frame challenge. This habitat is hundreds of kilometres in diameter, and thousands long. Trying to have just one kind of flying machine in such a large environment does not make sense: economics dictates there will be different kinds for different purposes.

If the air pressure on the interior surface is similar to that at sea level on earth, and the spin "gravity" is 1G, then the atmosphere will thin out with altitude in a similar way to Earth's atmosphere, and the axis will be in reasonably hard vacuum. The atmosphere will have to be arranged to rotate with the cylinder. If it did not initially, friction with the interior will spin it up, at the cost of weeks of hurricane-force winds stripping everything off the surface. The atmosphere will naturally form layers, rotating at different speeds, and you will need baffles to avoid permanent rolling storms forming, drawing their energy from the habitat's spin rate, and thus gradually slowing it.

Fixed-wing aircraft will work fine for long-distance travel between different points on the interior surface, as long as they don't try to fly higher than, say, 25Km, where the air starts to become rather thin for them. Aerodynamic lift does not require "real" gravity in any way, it's strictly an interaction between an airfoil and a fluid, producing a force. Helicopters will work fine for shorter distances, jobs that require hovering, and so on.

Current aircraft re-orientate themselves to the curvature of the earth as they fly over it with no problem, and the curvature of the habitat is only about one order of magnitude steeper. Navigation in the more rapidly rotating reference frame will be a bit different from on a planet, but will not be a problem, given simple navigational computers, and an equivalent of GPS. Any society that can reach such a habitat, let along build one, will have no difficulty with the relevant technologies.

Supersonic aircraft might create a noise problem. On Earth, that problem is fairly localised near their flight path, but the concave environment might see shockwaves travelling several times around the cylinder. You need someone who knows more acoustics than me to answer that question.

The more difficult part is reaching the axis region, and loading down ordinary means of transport with the life support and engines needed for that is pointless. Since the axis is effectively in space, you need a spacecraft to survive there. The sensible way to build one is to have "space elevators" at the endcaps, and perhaps at a few points along the length of the cylinder. The latter could run along the cross-beams that will be required to hold the cylinder together. Elevators can take a spacecraft up to the low-gravity, no-atmosphere region, and they can use comparatively low-powered rockets to move around there. Careful navigation will be required, since moving too far from the axis means they'll be accelerated by the upper atmosphere, and start to fall. An emergency parachute system will always be necessary.

Routine travel in the axis region could sensibly use an electric train system with pressurised carriages, and rails arranged so that the trains can't come off them. However, you still need spacecraft for doing repairs to the train tracks, reaching places that don't often need maintenance, and so on.

A good portrayal of the interior of such a habitat, although even larger, can be found in the Schlock Mercenary story "Broken Wind". That habitat had gone rather short of maintenance for several million years, and the spacecraft in the story use super-science gravity generators, but the weather is correct. Since it was constructed by creatures that fly via gas-bags, it lacks a train system, and other devices that surface-dwellers like humans would want.

Centripetal force may feel like gravity, but it's an entirely different principle, and that creates some significant issues. Any craft on the interior of a spinning cylinder is effectively in free-fall; all that keeps it from flying off in a straight line is the curvature of the surface, which applies a force to change its inertial vector. The moment an aircraft leaves the surface, it has to provide that compensating force entirely for itself. One could do this with lift like a terrestrial plane, but note that:

The advantage of a terrestrial plane is that it can use lift to offset gravity to achieve a stable and relatively low-energy glide. A plane in a rotating cylinder would require much greater fuel consumption and much greater moment-by-moment control, because it has to constantly correct its own inertia. A helicopter might be a somewhat better option, but note that the moment a helicopter leaves the surface its tendency will be to twist and roll over on its back (it is, again, in free-fall); it would need to constantly compensate for an assortment of odd spin forces.

A better solution would be something like a ballon or dirigible. Lighter-than-air craft rise by buoyancy, so the surface continues to provide the force that corrects the balloon's inertial vector, transmitted through air pressure. Give it horizontal propulsion and some means of rising and falling, and you're set. It could be a bit of a wild ride... Since there's no gravitational pull to keep the cabin in a particular orientation, the whole ballon would spin around like an object in free-fall unless there were some attitude controls to keep it stable. Balloons are not fast, but they are scalable, resource-cheap, and far more easily controlled in that environment.

For powered flight, you'd probably want to go with a rocket design rather than a plane. Launch it counter-spin so that it cancels the inertia imparted by rotation, move it in free-fall up and down the length of the cylinder, then carefully match speed and land it where you like. That is not resource friendly, but it would be technologically simpler than trying to design a lift-powered plane for that environment.

Edit: Short answer: The cylinder doesn't have much of a difference in pressure between the center and the edge. Gravity leads to Earth's atmosphere thinning out at altitude, not the spin, so a low power basic helicopter design is fine.

If you want the differential equation, see: https://space.stackexchange.com/questions/31465/radial-variation-of-atmospheric-pressure-in-rotating-oneill-cylinder-like-ship

Original answer: If they have magic^H super-science gravity field generators, just use those on the equivalent of an Earth ferry.

If this is a cylindrical object relying on rotation for perceived gravity via centrifugal force, the air pressure is identical everywhere. So design it however you want. You only need to overcome drag (air resistance). As far as winds are concerned, just give the inhabited sections a glass roof so there is no structural irregularities to generate irregular winds. Go from the "ground floor" to the "roof", pass through and air lock and ascend from there. If you want to pretend winds are still a serious issue, use a slingshot like an aircraft carrier does to launch craft.

Think about it. If I fill a glass jar with air, the air pressure doesn't change no matter how fast I spin it on Earth, or in space, under the sea (assuming the vessel doesn't explode/implode under pressure differences.

So you can use a a very low power helicopter style/quad copter engine to get around. If this structure was designed to be rotating at "only" 1,000mph (Earth surface sea level rotational speed) then either you already have magical materials (scrinth of Ringworld) with tensile strength superior to every material known to man and that still wouldn't get your Earth normal gravity.

Btw, everyone by the "star" in the drawing will burn to death and everyone at the ends of the cylinder will freeze to death. It's a nice piece of concept art, but it is not, in any way, a viable option.

Any spinning vessel with normal gravity requires magical levels of material science. Just go read Ringworld and hand waive away the stuff you don't want to bother explaining. Rendezvous with Rama being the other analog to your reboot.

For gravity vs rotational speed see: https://www.artificial-gravity.com/sw/SpinCalc/ So for a 1KM diameter cylinder... ~100 m/s, which is 3.6KM/min= 216km/hr

Not the answer you're looking for? Browse other questions tagged science-based science-fiction flight megastructures vehicles .

38
How do ballistic trajectories work in a rotating cylinder world?

18
Stabilizing a McKendree Cylinder Habitat
10
Flight within the shared atmosphere of a Rocheworld, and between the planets, with low gravity wrinkle?
7
What would the changes necessary for powered flight using rib-derived "wings" look like?
6
What is the science of fairy flight?
2
How massive can a structure get on the inside of a Mckendree cylinder?
4
General characteristics of an "aircraft" for gas-planet atmospheres?
3
Would there be any ways to theoretically have powered flight before the invention of an engine?