Weather processes on a flat world

I'm designing a flat world setting for a fantasy RPG, and I'm trying to figure out out how the climates and weather patterns would play out realistically (or at least semi-realistically) in such a setting. This world is built on a shallow vessel, and has one large, roughly circular continent 7,700 KM in diameter with around the same land area as Africa. Tall mountains, the height of the Himalayas, take up the continental center. This continent is surrounded by a single ocean which is slightly larger than it by area. 45% of the world is land, and 55% is ocean. The entire world is covered in a transparent hemispherical dome of opalescent crystal that spreads light via Rayleigh scattering, which keeps the atmosphere/humidity in. Everything is placed upon the back of a cosmic entity, which provides earth-like gravity.

The sun orbits this entity and moves over the domed world from East to West, and is directly overhead in the Northern Hemisphere (the equivalent of an equatorial region); it shifts position Southward to simulate seasons. (Edit: It is important to note, however, that this "sun" is a deity and not an actual star, so it has no noticeable gravity by itself. Otherwise, the temperature and luminosity are the same from the perspective of someone on the world.) This world does not rotate, and there is no Coriolis effect.

With these factors in place, I'm expecting a small number of air cells (not quite Hadley cells) and air temperatures that are more homogeneous than Earth's. The total surface area is only around that of the moon Callisto. Most winds would arise from the difference in sun strength between the Northern and Southern hemispheres, but would circulate within the dome. What would the weather be like in such an environment?

(Edit: Refined the question to be about weather only.)

I'll assume a hemispherical (or nearly so) dome, as it's the easiest for me to imagine, as well as providing room for air currents to have more effect than a flatter dome would.

In general, a flatter dome would produce more stagnant weather patterns. Since hot air can't rise as much, convection drops, and with it circulation. You end up with things just getting hotter, and muggier from evaporation from oceans, as the day goes on. And then reversing with nightfall, cooler tempuratures, and moisture condensing out of the air, most likely as fog/dew/etc. rather than clouds, since there's not as much room for dewpoint variation with altitude.

But in a more hemispherical dome, there's room for hot air to rise, warm air to move in laterally to replace it, and cool air to descend to replace the warm air.

Air over land masses generally heats faster than air over water. So the most prominent daytime winds will almost certainly be blowing inland from the sea, as the air above the land is heated, causing it to rise, and the warm air from above the sea moves in to replace it. This will likely be slightly exaggerated in equatorial equivalent regions, where the sun hits most directly, and lessened in polar equivalent regions with less direct sunlight.

As the air moves in from the sea, it will bring moisture with it. As it's heated, it will rise and start to cool as it moves farther away from the land. It is also likely be deflected upwards by the mountains in the middle of the continent. As it cools, this will cause the moisture in the air to condense in to clouds, and possibly precipitate rain or snow. If there are other outlier mountains, separate from the main set in the center, those would cause clouds and rain before the moist air reaches the central mountains, but only in the areas where mountains are in the path of the moist air (see rain shadow).

Unless there is a (mostly) complete secondary ring of mountains outside the main range in the center, a good portion of the moist air will reach the central mountains before losing most of its moisture. This will give plenty of opportunity for rain/snow on that central range.

Here's where things will get complicated. I originally assumed that since most of your question seemed to be leading toward an Earth-like environment, that you intended these mountains to be snow covered. And to accomplish this, the inner surface of the dome would have to absorb heat from the air that reaches it, at a rate that is in an approximation of Earth's atmosphere bleeding heat in to space, making upper climes colder. However, if the entire inner surface of the dome accomplishes this, then oceans in contact with the dome would freeze over, and the air inside the dome would be colder the farther from the central mountains you get, even at lower altitudes, which is decidedly NOT Earthlike. The hot air that rises near the center of the continent and dome would reach the top of the dome and start to cool off, and start trying to sink. It would not be able to sink down through the hotter updraft, so it would spread out sideways in all directions, keeping it in close contact with the inner surface of the dome, accelerating the cooling process (whereas on Earth, air would generally start to heat again as it descended). This would cause it to fall even faster, etc. Until it contacted the ocean, at which point it would be pulled back toward the center of the continent, to replace the air blowing in from the sea and rising over the land. The repeated cycle would continue to accelerate as the day goes on, until hurricane force winds blow in from the sea, with the air being quite frigid, having been barely warmed by the sea before making landfall.

If, however, the dome doesn't suck heat out at the same rate along its entire surface (say, the lower area is heated by the same cosmic entity that's providing gravity), the cycle would be much gentler and more Earthlike.

At night, the entire process reverses, since land cools more quickly than sea, and early in the night the sea will be warmer than the land, and air above the sea will start rising up the inner surface of the dome, which pushes it toward the center, and then will start descending once cooled. The downdraft will be focused primarily over the central mountains, but it's unlikely that the moisture will stay in the air long enough to precipitate over the central mountains themselves. More likely there will be a ring of coastal rainfall before the air climbs higher. When the downdraft hits the central mountains, they will deflect it outwards. The air above the main land of the continent will also be drawn outwards to replace the air rising above the sea, and the wind direction will change to be primarily blowing from the mountains to the sea. Unlike the daytime, this would be more pronounced over the already cooler polar equivalent regions of land, and lessened in the equatorial equivalent areas.

Without any rotational forces and with solar energy being scattered by the dome so there isn't a true sub-stellar point the weather in such a setting is, ignoring magical/deific effects, going to be dominated purely by local circulation cells directly controlled by interactions between topography, aspect, and vegetation and insolation.

In many ways the weather of this world will resemble the local rain loops seen in many larger rainforests; the heat of the sun evaporates local moisture during the day and as the atmosphere becomes saturated, possibly as it cools in the evening, that moisture falls back out as rain often directly onto the vegetation it evaporated from just hours earlier. Sun-facing hillsides, dark surface, large bodies of water, etc... are going to soak up relatively large amounts of solar energy and create updrafts that draw in moisture and create cloud masses. Without larger, organised, circulation systems clouds aren't going to move in any particular direction from their area of formation so the clouds will get heavier until the updraft can no longer sustain them and then dump their water back onto, or at least near, the area where much of it originated. Winds will be local, relatively gentle, and blow towards updraft zones during the day and towards water, where the updrafts will continue, at night.

not an answer to the question, this is a comment that requires a visual aid to be clear.

The use of a full hemispherical dome that is opalescent, causes an unexpected problem with illumination.

Before dawn, and after dusk, while the sun itself is below the horizon, it is still shining happily on the dome on that side.
The dome reemits this light in all directions, thus lighting up the whole disk to a certain extent.

Depending on the distance of the sun, your disk will spend a lot of its time basking under bright overcast sort of light, even if direct sunlight does not reach. 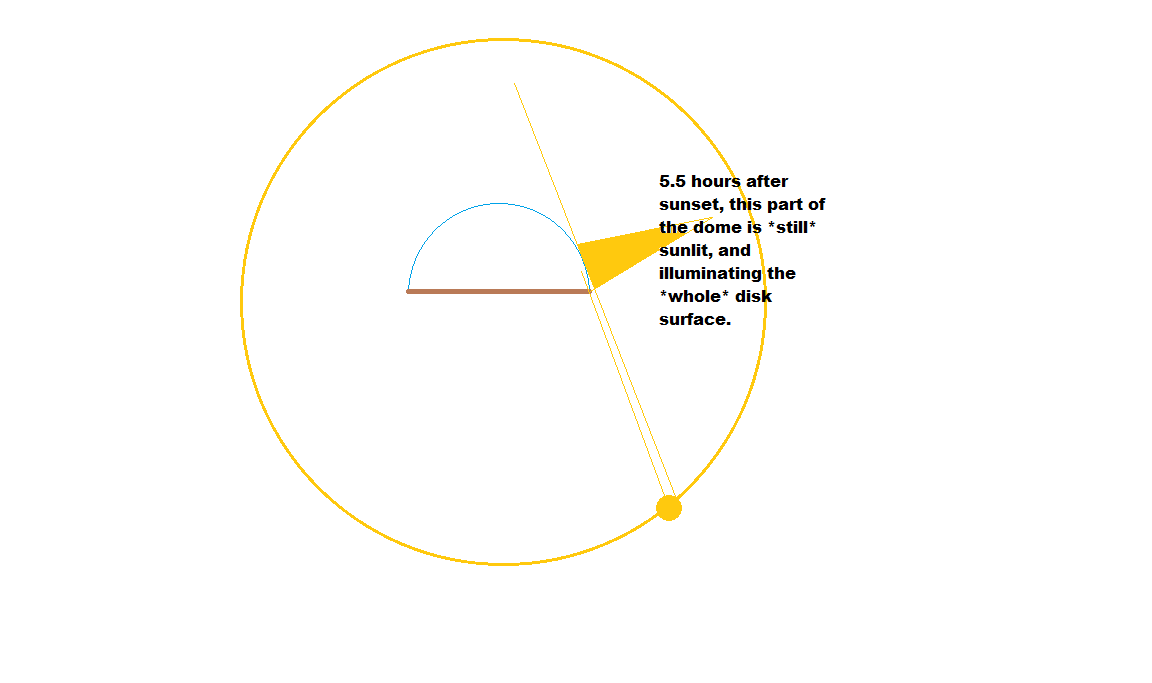 Not the answer you're looking for? Browse other questions tagged science-based climate atmosphere weather .

10
What would the weather on this continent be like?
9
Are my deserts accurately positioned?
3
Weather Impacted By Extreme Magical Effect (Heat)
2
Equatorial or Meridial Ocean
7
Climate of a No-Axial-Spin Earth?
4
Are the deserts in this continent realistically placed?
5
Weather on a flat world illuminated by static luminaries