So much smoke that the suns rays never get through?

In my book I have a city which is constantly dark. The sun doesn't reach it. This is because it's a city of waste, so all the waste gets thrown into this city and lit on fire every single day, which makes smoke clouds that are so dark that it barely looks like day during the day. Is this realistic?

Volcanic eruptions can make the sky dark as night. Just as an example, we can recall what Pliny the Younger wrote about the Vesuvius eruption in 79:

Broad sheets of flame were lighting up many parts of Vesuvius; their light and brightness were the more vivid for the darkness of the night... it was daylight now elsewhere in the world, but there the darkness was darker and thicker than any night.

Volcanic eruption can last for very long times (see the eruption of Hawaiian volcanoes or Mount Etna in Italy), and if they spit in the air thick columns of ashes they can also obscure the sky.

Moreover, if your citizens have the unhealthy habit of throwing all their garbage in the volcano caldera when there is no eruption ongoing (image an Hawaiian caldera, filled with bubbling lava) this can produce additional black smoke, which still contributes to obscuring the sky.

It's quite hard to make this a permanent event, mostly it will only apply when the weather is calm, but it can certainly be a regular and lethal event.

Let me introduce the Great Smog of London.

The Great Smog of London, or Great Smog of 1952, was a severe air-pollution event that affected the British capital of London in early December 1952. A period of cold weather, combined with an anticyclone and windless conditions, collected airborne pollutants—mostly arising from the use of coal—to form a thick layer of smog over the city. It lasted from Friday, 5 December to Tuesday, 9 December 1952 and then dispersed quickly when the weather changed.

It caused major disruption by reducing visibility and even penetrating indoor areas, far more severe than previous smog events experienced in the past, called "pea-soupers". Government medical reports in the following weeks, however, estimated that up until 8 December, 4,000 people had died as a direct result of the smog and 100,000 more were made ill by the smog's effects on the human respiratory tract. More recent research suggests that the total number of fatalities was considerably greater; about 6,000 more died in the following months as a result of the event.

The thing about having pollution on the levels you're asking for is that you're going to kill a lot of people. The more people in your city, the more smoke, the more people die. Note that the great smog was largely caused by domestic burning of coal, at that point the normal way to heat your home, and was resolved by banning the use of coal in the city. Almost every house in the city was putting out heavy smoke that was then held near the ground by a combination of weather conditions.

As soon as the wind picks up it's going to clear your smoke away from the city and allow the sun through once again.

Smoke from burning things (coal, trash, automobiles) that pollutes cities is called smog. That is what your city has. In many places smog accumulations happen seasonally because burning things and cold air happen seasonally - Ulan Baator is a good example. It is cold there and in winter the have to burn a lot of coal. Other places have smog from burning trash like your city - I read this is one of the problems in Gwalior, India where the weather is probably warmer than in Mongolia. In many cases, the city is ringed by mountains and the smoke is stuck down there with nowhere to go. This is the same reason Los Angeles and many other cities have smog problems. It is called a temperature inversion.

Temperature inversion stops atmospheric convection (which is normally present) from happening in the affected area and can lead to the air becoming stiller and murky from the collection of dust and pollutants that are no longer able to be lifted from the surface. This can become a problem in cities where many pollutants exist.

Here is the City of Angels under a cozy layer of smog. Once when I visited the smog was green. Viewed from Pasadena, the layer was so discrete you could see the tops of palm trees sticking up out of it. 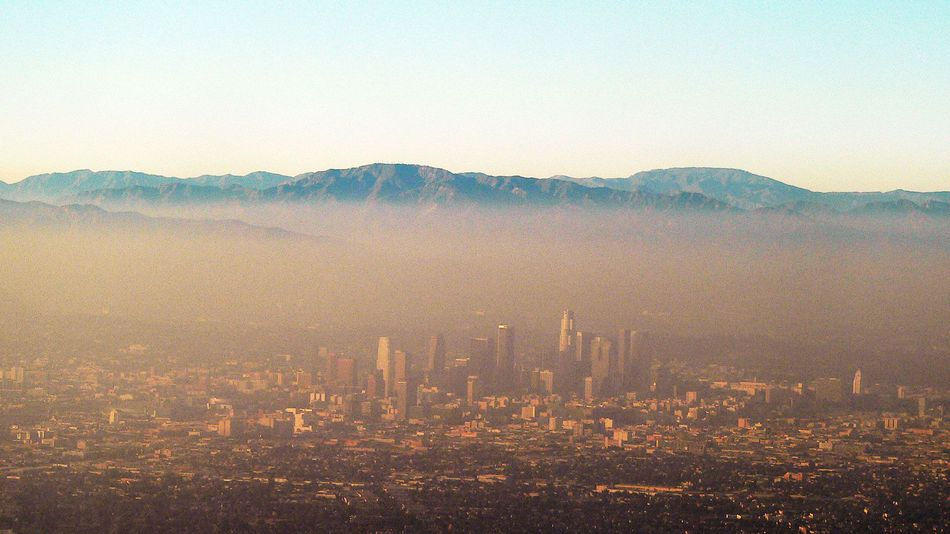 So too your city. It is in a valley (probably by a river) surrounded by highlands and the smoke accumulates down in there. It does not take much to dim the sun. The rich people would live up on the mountainsides above the smog layer. Maybe for fun those rich folks could send things down to be burned which color the smog different colors, to make it look cool.

From experiencing the Carr and Camp fires close up:
- Smoke thick enough to block the sun and make it look like night during the day is absolutely realistic, even ~ 10 miles down-wind.
- But, the amount of stuff you need to burn to make that happen is immense, the camp fire for example was spreading at ~111 acres per minute at its peak. With your garbage dumping scheme, this may or may not be possible.

It is realistic with one condition. The emission need to be discarded through a chimneys high enough to push the pollution above city buildings, yet the pressure need to be enough to not push them toward the ground, creating an umbrella effect. Otherwise you will end up with what's known from London, or more modern Krakow where the pollution is low enough to kill people but not high enough to block sun. 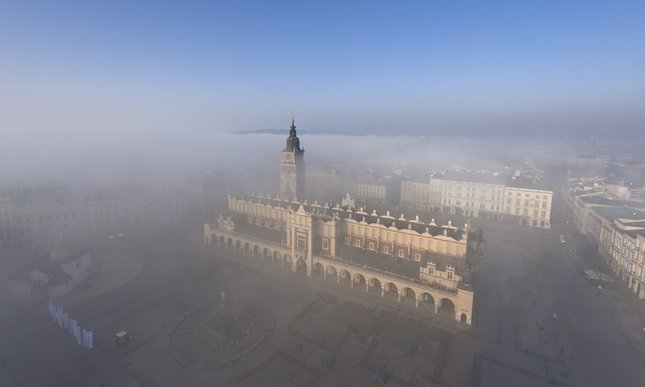 Remember that natural occurring clouds could also add to sun blocking. For example, the city is sitting on the side of a mountain that prevents air from moving and forces it to condense in the form of clouds.

Been there, done that (at least, most of the time). Pittsburgh in the 1940s. http://popularpittsburgh.com/darkhistory/ There are photographs showing street lights on at 10 in the morning.

However, this will require careful attention to weather. The city must be in a natural bowl (not unreasonable), but it also must never experience strong winds (not reasonable at all), which would disperse the clouds.

"constantly dark" probably not, at least not on Earth - for reasons given in other answers.

Assuming you want to do this on Earth you could combine the trash thing with the fact that it sits over a burning coal mine or downwind from burning oil wells. In that case "usually dark" could work for me.
In any case 'abandoned city' may be a better description, as this would be toxic to humans for a sustained period.

To get the trash there, maybe you could conveyer it up one side of a mountain and just have it roll down the other side (the conveyer side being the 'good side of the tracks' upwind of the pollution)

A combination of pollution, volcanoes, and meteor impacts like the one that killed the dinosaurs, https://www.psi.edu/epo/ktimpact/ktimpact.html The key factor would be repetition. So, maybe the citizens are constantly burning fossil fuels because they need light in the darkness caused by the continuous meteor strikes worldwide, which are causing excessive volcanic activity.

11
Ensuring consistency in a world
19
What is the likely method of surviving a Tsunami in a city?
9
Is a "sun belt" realistic?
12
How can I keep dense fog in an area for half a day?
7
Can there be substantial darkness?
8
What does a global war look like from space?
5
An Earth with a permanent winter state with drastically reduced temperature, dark skies and mass extinctions
4
Required secondary powers for someone who can manipulate/turn into smoke?
1
Is it plausible for a planet to have a face constantly sunlit while the other is constantly moonlit, with the sun/moonlit territories never changing?