Is a "sun belt" realistic?

In a few science-fiction books I've read, the world that the story takes place on doesn't have a sun, but does have a "sun belt," where (instead of a regular sun) the world is lit by a stretch of sky that's always there, and turns darker at "night time," and lights up more strongly at "day time."

This would look something like a thick planetary ring, that luminesces all by itself, doing the job that the Sun does for our own planet, Earth.

Is any part of this lighting plan realistic?

The other answers have pointed out that a sun belt as you imagine in it, a planetary ring, could not naturally develop. However, I have another idea for how you could get the same effect. When you look up at the night sky from somewhere on earth that isn't too light polluted, you can see the Milky Way:

This dense band of stars exists because our galaxy is roughly disc shaped. Our solar system is in this disc, so when we look towards the center of the galaxy there is a much higher density of stars and you see this bright belt. Now imagine a world in a different part of our galaxy, or another galaxy all together, where the stars in the band are closer, denser, and brighter. When one half of the planet is rotated towards the galactic center it is in daytime, and when it rotates away it is in nighttime, because there are fewer stars in the "sun belt". I believe this could explain your sun belt setting. Again, it might not work for our galaxy, but certainly such a galaxy could exist.

Details are scarce, but I know of no natural phenomenon that can do that in a stable manner. A compact object radiating x-rays could be invisible while making a ring glow, but the geometry doesn't work. And such objects are bad neighbours anyway.

Artificially it is simple enough. Build satellites on stable orbits and give them nuclear reactors where transparent materials expose the core downwards. We have had the technology for such satellites for decades. What we do not have is the resources required for the sheer number of satellites needed. The satellites would also need constant maintenance, although a civilization with the resources for a belt would almost certainly be able to automate that. And have several alternate methods of building the belt available. Having fusion power would help a lot with resources, for example.

It is gravity which compresses hydrogen until nuclear fusion starts. Gravity compresses object to a sphere, not torus.

Your idea of the "shining torus" is impossible to occur naturally, within laws of physics. Of course sufficiently advanced civilization can build gigantic lamp of any shape and size.

It is almost totally improbable for a toroidal star to originate naturally, but in theory it may be possible for a very technically advanced society to create one artificially, probably involving a series of massive linear accelerators.

If a large body of gas was spun up to sufficiently high rates of angular velocity, such that the centripetal forces were greater than the force of gravity at the surface of a sphere of the amount of gas involved, then it is possible that the gas could form a toroid.

With a sufficient volume of gas, compression within the toroid could lead to the ignition of a hydrogen fusion reaction, resulting in the toroid being the requested luminous band.

The amount of gas involved would be extreme - without the high-velocity spin keeping the ring-star a ring, the volume of gas involved would form a hypergiant star or a Wolf-Rayet star, which would quickly shed a lot of its mass. The speed of rotation would also be extreme, probably on the order of thousands of kilometres per second, depending on the diameter of the torus.

In order to have a world at the centre of such a system, the world could simply exist at the centre of mass/gravity of the system, and be constantly lit at the equator, with twilight at the poles.

Alternatively, we could invert another proposed type of solar system, where there is a central sun that bobs through the hole in a large solid flat disk (an Alderson disk) - in this system, a central world could bob through the centre of mass of the ring star, thus alternately lighting first one side of the planet then the other, providing a day-night cycle.

As an aside, it may be very difficult to explore such a system without very powerful sources of thrust - the toroidal star would have a massive gravitic field, and would play havoc with conventional rockets' trajectories, meaning that it would be very difficult to visit bodies in the outer system, if there were any, and even seeing them from a planet at the centre of the ring would be difficult if they were in the plane of the toroidal star's rotation.

Simple, everyday clouds will do the trick.

I know because I live in one of the world's sunniest places. Sometimes the sky is covered with clouds, but when the clouds are thin, instead of making the day darker, this makes the day brighter. It has to do with the way they scatter light.

Sometimes it even hurts the eyes to look at these clouds. Looks like this: 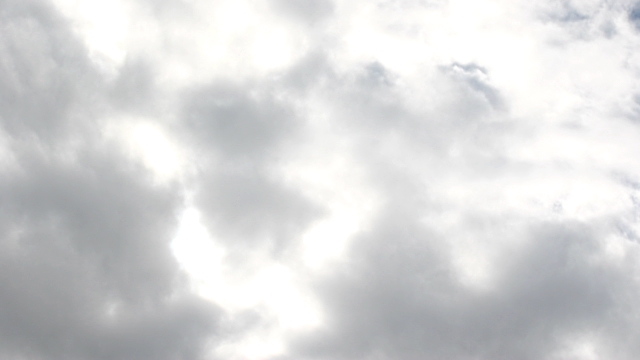 By the way, I didn't take this picture. The sky is just not the way I describe right now as I write this. I found this picture on the Internet.

Anyway, you could go for a better effect than that. The phenomenon that causes the sky to be blue is called Rayleigh scattering. Take a look at how it works. If your world is permanently covered in clouds, or if the atmosphere is made of different substances than our own, then they could scatter all wavelengths coming into the planet rather than only the "bluemost" ones.

Someone traveling to your world would perceive the following differences, when comparing it to Earth:

This model allows for a natural night just like our own, too. All in all I think we can't get a simpler model than this.

1 - Nothing with the energy and mass of the sun can occur as a stable belt around a stable planet; it is physically impossible in consideration of what we know of physics. You would have to create an alternative universe to allow it.

2 I’m inferring that you want the artificial object to do ALL the jobs the sun does as it impacts the Earth only. It would not move the Earth to other places or orbits, and it would not allow the Earth to have our Moon as it is. The real sun also has an enormous mass that creates forces within the planet to heat itself in some ways and affects a lot of things. If this ‘ring’ had the mass of the sun (although structurally impossible – it would collapse on itself), it would tear the earth into pieces.

3 If there somehow was a belt that had a light as strong as the sun's affect on Earth on it, I assume you could have it just have one area that is bright, one dark, and set it to rotate around the Earth every 24 hours.

This is a very complicated system you're referring to: nice!

If I am reading your question correctly, it sounds like you are just looking for an alternate light/heat/energy source other than a standard star. A few interesting, yet plausible ideas:

A binary planet system that doesn't orbit any particular star, they just orbit each other (to account for a day/night cycle). One of the planets may exude massive amounts of energy of some sort while the other planet's atmosphere is an composed of a gas which reacts to the radiation of the first planet. When one side of the planet faces the radiation, it reacts and creates light.

Not the answer you're looking for? Browse other questions tagged reality-check astronomy day-night .

50
What would the sky look like from the surface of a planet with rings?

6
Slowly Sculpting the Planet - Sky within a Red Dwarf System (Cont'd)
13
Does a planet's axial tilt and seasonal progression affect a planetary-ring system, as seen from the planet surface?
9
A world with only sunlight and a world with no sunlight (Fantasy)
9
Could I have an earth-like planet from which sun and moon would never be simultaneously visible?
4
Looking for a review of my tidally locked red dwarf planet system specs!
19
I want ten Earth-years long day on my planet. Can I have it?
23
Can the Little Prince's planet actually exist in our universe?
7
Three Moons and Simultaneous Full Moons?
7
Plausible Premise? Reasons to leave a village by young person in post apoc post plague village system world
5
Would the seasons on this solar system be too extreme for Earth life to thrive?