Can there be substantial darkness?

OK, OK, I know, darkness is nothing but absence of light, so there can be no substantial darkness. Darkness, on its own, doesn't exist.

But, can we not get pretty close to this?

Can there be something - I don't know what, smoke, gas, clouds, fog, atmosphere, dark matter, whatever - that could be ubiquitous in the atmosphere in large areas, spanning whole cities or, in extreme cases, even whole countries, that would have the following properties:

Have you ever heard of the sound suppression system used in some headsets? It works by creating a sound wave with the same amplitude and frequency of the sound you want to suppress, but just with the opposite phase.

In this way the interference between the two waves causes silence. 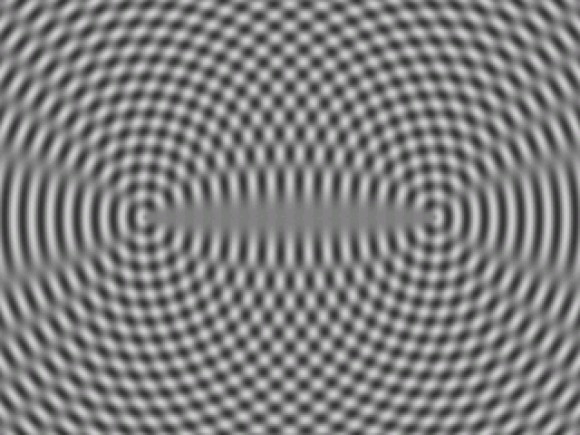 Just shift the phase a bit, and the zeroing will not be perfect, leaving some light visible.

Disclaimer: I misunderstood aspects of the question, so this might not be the kind of answer the OP is looking for. But I had a tremendous amount of fun writing it, so I'm leaving it up. But! like I explained to Soan, if the Dark Lord had mastered the science of photonic resonance, allowing him to shift normal photons into daniels, it could work! Muahahahahaha!

You might not be thinking about this in the right way

Photons don't "emit" anything. They are the thing "emitted." Our eyes (rods & cones) "detect" this object and our brains interpret that detection.

That distinction, detect but refuse to interpret, is important. Our eyes don't detect x-rays, for example. Which is why X-rays don't cause "light" or "darkness" as far as our brains are concerned.

So, let's create a particle

I can't call it an "antiphoton." Antiphotons already have a connotation/definition in the world of quantum physics, and it isn't as a particle that our eyes can detect but our brains can't interpret. That's truly unfortunate, because "antiphoton" would be the most obvious name for this particle.

What are Daniel's characteristics?

Daniels have all the same characteristics of photons with one exception, our brains don't know what to do with them. The rods and cones of our eyes think they're photons, but when that data is sent to the brain, it's response is "huh?"

From a scientific standpoint, this would be hard to justify other than by hand waving. Simplistically, rods and cones are little more than frequency-sensitive switches. The impact of a photon turns the switch momentarily on. When the brain is told that a particular switch was turned on, it uses that fact to build an image. In other words, rods and cones are chemically complicated but systemically simple.

In a sense, we're asking the brain to not understand that the switch was turned on. In this case, it would be helpful if someone with more medical knowledge than I could edit my answer and fill in this blank. Is there the equivalent of two data paths from the rods/cones back to the brain? One that indicates the closure of the switch, another that tells the brain what the switch means? If so, then all we're asking the body to do is not send the interpretive data back to the brain. (But, if it's as simple as I think it is, hand waving is all we have left.)

What does this mean if both photons and daniels are present?

Obviously, if all that exists is a room full of daniels, then effected humans are blind as the proverbial bats. Darkness abounds.

But... Let's say that a candle is burning and someone has a bunch of daniel-emitting flashlights who are the polos in your game of visual marco-polo? As you try to find the candle, they're casting the beams of daniels about causing blindness and distraction. Your eyes would be getting a mix of photons and daniels (and your brain might get a splitting headache). In a normal room, the image of the candle would be varying in brightness and occasionally spotty.

Actually, make this a room with mirrors for walls and this game might be really fun.

What you need is a particle having all the basic characteristics of a photon, making it detectable by the rods and cones in our eyes, but is otherwise incomprehensible by our brains — meaning the brain will only interpret the particle as "darkness."

The thing that makes fog visible is that the shape of the water droplets causes them to refract light, but a glass of water with a dye in it will reduce light inside it without the water necessarily being "visible" on its own to creatures living inside it.

If you had a dense smoke or extremely sparse liquid, made of a translucent substance like a glass of water, whose particulate was shaped in a way that didn't refract light the way particulate steam does... or maybe like a "dye for air", which wasn't quite visible on its own the way dust is, but which nonetheless absorbed or changed light on the way through it, you could achieve this kind of effect. I don't know about any substance with those properties IRL, but IMO it's conceivable that one could exist.

Also, I'm not 100% sure if I'm right about how this works, but I'm lead to believe that the reason far mountains look blue is because air is blue. Imagine if air was black -- the mountains in the distance would just look darker. Air can't be seen on its own, but sometimes I can see far mountains well, sometimes they're blue, and sometimes they aren't visible at all amidst the blue haze. All you're doing is just reducing the basline render-distance for real-life objects, and changing the color of that haze.

Can such a substance exist? Propably not

It needs to be in such a small amount that you are still able to breathe but at the same time absorb 99.999% (or more) of sunlight to create moon like circumstances. Even the darkest substance known is not capable of absorbing so much light. That being said there could be a material absorbing even more light.

The problem this unknown substance would face is that it has to absorb 99.999% of light while being spread out in the air like fog and not damage the inhabitants.

When a material absorbs light it gets warmer this is not that big of a problem with most materials because they reflect enough back to keep survivable temperatures. (even then the sand in the Sahara can reach 70°C. Problem is when that’s not the case it can get even hotter. So during the day nobody would leave the house except when there are enough clouds around.

Can a Dark Lord realistically summon it? Maybe

Depending on how this material is created it could be “summoned”. Even if itself couldn’t be summoned it could be moved with wind probably. So If your Dark Lord is sufficiently powerful he should be able to at least let it seems like he can summon it.

Using our existing physics, I can think of a few ways.

For a start, let us consider what "darkness without obscuring" means.

It means that things in the dark area will look dark, but if you look through it to a light area, they will look light. Like looking under a bridge, the stuff under the bridge is in shadow, everything else is lit.

1) So one way is to have the darkness be at a high altitude, as a canopy over everything. This doesn't work so well, but at a low enough level (10ft or so above the ground) and impenetrable enough, it could work better than clouds. The canopy could be flying insects, nanites, smoke, or some light buoyant film.

2) Other than floating above people's heads, another way is to consider that particles need not have the same dimension at all angles. They could be very flat micro-particles covered in a vantablack-like substance. Their shape permits these particles to fly using the absorbed solar energy, but also means that they mostly block light in one direction.

They'd only need to be further apart than 1 micrometer in order not to block visible light horizontally, and average complete coverage to block vertical light from the sky; that's perfectly doable with super-thin stuff particularly if it's designed to seek sunlight to fly.

These particles would also make flashlights less efficient, since they'd angle towards light sources, but then have to level up as that caused them to fall.

These particles could also make the darkness harmful to flesh, if the thin particles were sharp, like tiny flecks of obsidian; you'd have to venture into the darkness wearing goggles and swaddled in cloth or leather, or risk going blind and being flayed alive by the swirling darkness.

3) But really - what's the EFFECT of darkness? It makes things look dark. So what if it's not in the air, but rather a thin layer over all surfaces? If you tread on the ground, you too become Darkened. You likely don't want that stuff on your eyes, so goggles again recommended.

What the layer is (mites, nanites, slime, dust) doesn't matter, other than that it'd affect the specific way the locals handled the Darkness. Having it be small insects makes it ooky and also explains why carried torches work, if the bugs avoid fire. Depending on the setting, it's reasonable for the reader to believe in insects being controlled as a colony, so sticking together in patches of slowly expanding blackness, etc, and leaving someone who walked out of the blackness.

We could change the sun to achieve such an effect. If our central star happened to emit light concentrated on a few wave lengths (similar to laser light, also found in some unusual types of stars) and we had a gas which happened to absorb light at those frequencies, we'd get what you want. Ideal would be a gas like argon or xenon, which would have to make up a large part of the atmosphere (more than our 1%) and have some (volcanic) sources. Being a noble gas, it's difficult to isolate, doesn't harm us, doesn't smell, and so on.

16
Ways to make contact with aliens on a much larger size scale?
3
What would the effects be of a world where darkness took precedence over light?
24
What effect would liquid sulfur oceans, sulfur dioxide in the atmosphere have on visibility, sound propagation and other environmental information?
5
Determining the energy efficiency of a Light Wand
4
How would organisms adapt to survive darkness beasts? [expansion to my old question]
6
Creating Darkness
4
Can an Insect's Pheromones Be Visible?
8
With as much scientific accuracy as possible, how would chemicals injected in one's body be removed?
6
How does a team operate in a situation of one-way communication?