Are there any reasons why a dinosaurian creature wouldn't be able to have a thoracic hump?

I recently asked a question regarding whether or not a fictional theropod dinosaur-like creature I created could feasibly raise and lower its head which sported a number of large horns.

I received what strikes me as an excellent and plausible answer: the suggestion that I give the creature a thoracic hump, like the kind you would find on a horned mammal like a bull, ox, or elk. As I understand it, the size of the hump would depend on the weight of the head. A heavier head would need more powerful muscles to lift and lower it, which in turn need larger spinal processes to connect to, hence the hump. Here's an example of an animal with the sort of hump I'm talking about. 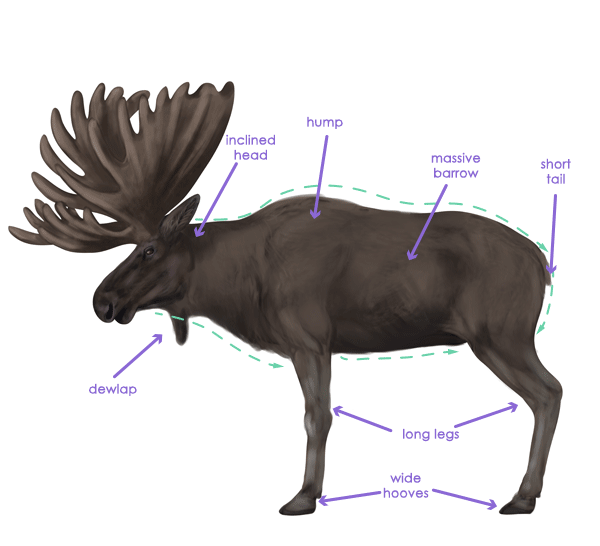 Before I commit to the inclusion of this feature on my animal, however, I was wondering if anyone had any scientific objections to the presence of a thoracic hump on a theropod dinosaur (if it would be incompatible with the arrangement of the creature's muscles or something like that). I just noticed that no dinosaurs seem to have this feature and I'm essentially looking for a second opinion.

This is the revised creature tentatively sporting the hump.

The hump would be above the pivot point

The impression I get from your picture is that you are imagining the hump to be above the front legs. That wouldn't make sense, the hump in a moose, for example, is directly above legs in ground contact, so the muscles for moving the head have leverage. The hump, if any, in a two legged dinosaur would similarly be above legs in ground contact, which would be the back legs.

In fact, Ortega, F., et al, 2010 published their discovery of a humped therapod Concavenator corcovatus. Check out page 204 for a picture.

Not the answer you're looking for? Browse other questions tagged reality-check creature-design fauna dinosaurs or ask your own question.

11
Why would a land creature have tentacle-like appendages
14
Is a four armed arboreal reptile as described viable?
6
Help me Explain this Alien's Traits
7
Are there any real reasons for interstellar conquest?
9
Would my horned theropod dinosaur- like creature be able to lift his head and/ or balance?
6
What sort bridle would be needed to ride a multi-headed carnivorous mount?
5
Can the dunkleosteus jaw model work on a land predator?
5
Anatomical Review: Would the way I designed this semi arboreal Imp be biologically feasible?
1
Natural prosthetics