Would my horned theropod dinosaur- like creature be able to lift his head and/ or balance?

I'm in the process of designing a creature loosely resembling a theropod dinosaur that sports a number of horns/tusks on its head and face, and I'm wondering if anyone can help me evaluate its feasibility. I'm not terribly concerned with the practicality/ functionality of the horns/ tusks themselves or their arrangement. They're strictly ornamental and probably stupid from an evolutionary perspective, but I'm pretty resigned to that fact. 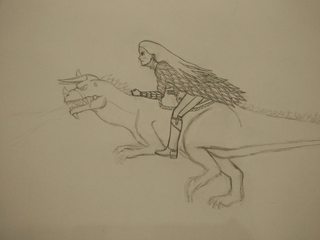 What I am concerned with is whether or not they might compromise the creature's ability to lift/ hold up its own head (is the neck thick and muscular enough?) or balance. (Would a longer tail or a tail with a source of extra weight at the end help any?) Are there any compromises I might be able make if they do prove unfeasible in these regards? I've come up with tentative estimates of the horns'/ tusks' weights based on what info I've been able to garner about deer antlers and black rhino horns. I'm estimating the two large horns at 2-3 pounds each, the vertical horn jutting up between these two at 1.5-2 pounds, the snout and chin horns at 0.75 to 1 pounds each, and the tusks (which are made of the same material as the horns) at 1.5 to 2 pounds each.

Here is an updated version of the creature design featuring a thoracic hump as per one of the suggestions I've received.

Your creature is fine, there are theropods with crests and other crap on their head, and your theropod is short necked and stocky so ballance should be fine. Air sacs make the front of the animal a lot lighter than it looks. Also you should straighten that top line on the hips (it should not curve down much), otherwise you are cutting away about half the muscle mass of the hind legs.

Your rider however is all wrong.

If you look at ostrich riders they need to be seated directly over where the feet touch the ground in a standing position. More importantly the rider needs to stay upright not lean forward. If anything they may want to lean back and swing their legs forward. Posture wise it is more like sitting on a motorcycle than a horse, this is becasue a theropod is going to be a lot wider than a horse. So you should mover your rider back over the hips in a more seated position.

Alternatively they could sit behind the hips and lay forward, but they will have to stay in that position.

Now yes an ostrich is smaller than your theropod but the balance issue is the same. 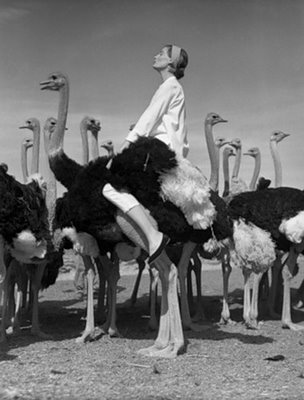 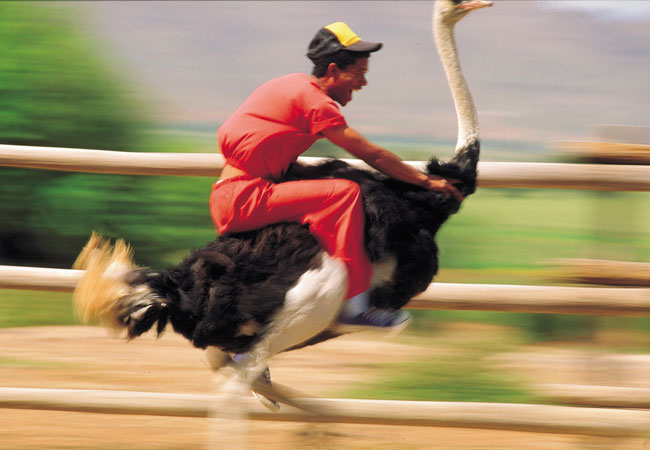 here is an allosaurus for body comparison. I also recommend http://www.skeletaldrawing.com/

To be frank, I'm not so worried about the horns on your creature; the rider on the back is a far bigger problem.

The real issue you have with this creature is centre of gravity. The legs are too far back to balance the creature correctly, unless it has a very heavy tail. Most of the body (where the bulk of the weight will be) sits forward of the legs, as does the rider. This creature looks to me like he'll tip forward constantly.

The smaller front 'paws' are about right, as is the hip placement, but I'm thinking the best way to solve this is to give it a longer, stronger hamstring / quadriceps configuration in the first joint of the leg, that largely brings the leg forward, then have the calf go straight down from there so that the foot (which probably needs to be larger) is sitting close to the centre of the body (the head and tail would then counterbalance each other). This means that the calf of the leg could come down at (say) 40% distance between hips and shoulders, then the foot could be (say) 20% of the same length. That should make it far more likely that such a creature could support a rider, who'd be sitting on the back roughly above the foot.

That said, I'd strongly consider making your dinosaur stand more upright if supporting a rider, as the configuration I'm describing above would put a lot of stress on the leg and foot bones because there's a lot of off axis joints that would leave the animal's most powerful leg muscles working more as shock absorbers than power transfer conduits.

I suggest the rider would be better placed directly over the animal’s hind legs or perhaps just slightly in front of them. When the animal is walking or stationary it would have its head and upper body raised and its tail lowered so the rider will be on a slope and much closer to the animal’s body (any saddle or stirrup’s used need to accommodate this).

When the animal runs it would lower its head and raise its tail as a counter balance. At this point the rider probably needs to be more upright and over the hind legs to avoid unbalancing the creature. Another option would be riding as a horse jockey does, with the legs well up to avoid getting in the way of the animal’s leg movement.

If you want the rider to be a little further forward, it would always be possible to counter balance that by adding a little weight behind the rear legs, sword, shield, extended saddle packs etc, but obviously don’t overdo it. A larger animal would make the whole thing easier, provided it was trained not to eat the rider ;o)

Another option on a bigger animal would be two riders - one forward and one aft of the rear legs.

I think the rider needs to sit between where the animals feet are...

If the head is heavy, your creature would likely need big neck muscles and corresponding spinal processes on its backbone to support the weight. It isn't so much the actual carrying around of the head/horns which is the problem - it is the muscle power needed to raise and lower the head when the creature wants to eat something on the ground, or have a drink of water.

The hump of a bison is a good example of an animal with this muscle mass and enlarged spinal processes on the thoracic vertebrae.

Here is a modern bison, showing the skeleton inside the hump: 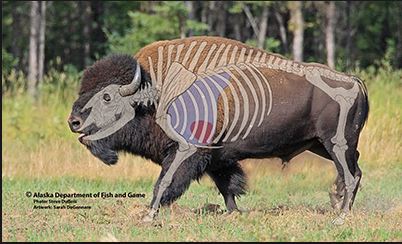 And this is a prehistoric bison, with enormous horns: 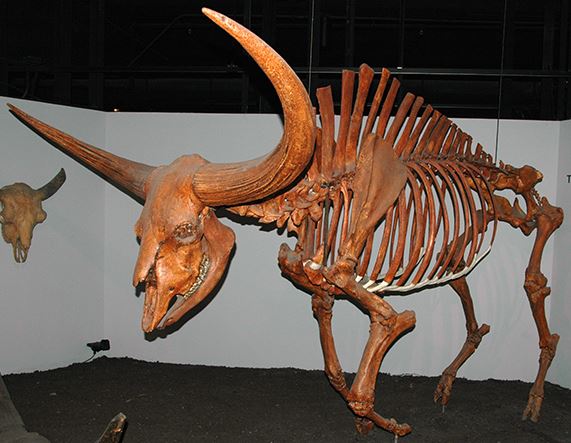 All this weight at the front (head, neck muscles, thoracic hump) will indeed need some sort of counterweight. Probably in the hip region or the root of the tail, rather than by giving the creature an ankylosaurus-style tail club. Massive great leg bones and muscular legs would be a start - and would also make it a more powerful runner or kicker. If you don't mind it having a slightly waddling run - so it gallops like a crocodile, rather than like an ostrich - then the tail muscles would be providing energy for walking/running, and you could justify a thick heavy base to the tail.

Not the answer you're looking for? Browse other questions tagged reality-check biology creature-design fauna dinosaurs .

12
Why would a land creature have tentacle-like appendages
7
Would a humanoid creature with pointed legs/feet be able to stand, walk/run and maintain balance?
16
Is a four armed arboreal reptile as described viable?
8
What would have to happen in order to have both humans and dinosaur-like creatures on the same planet?
3
Are there any reasons why a dinosaurian creature wouldn't be able to have a thoracic hump?
7
What would it take for a theropod-like creature to be capable of running underwater?
6
Eating one whale every three thousand days?
9
Developing a scientifically accurate species of dragon-like humanoids
8
How to trap and kill a T-Rex-like creature?
3
Why would this creature have a head?