What sort bridle would be needed to ride a multi-headed carnivorous mount?

A book that I'm currently writing called Surge features an enemy faction called the Degenerates that are heavily inspired by the Scythians (Indo-Iranian horse nomads that ruled the Eurasian Steppes and Central Asia from the 9th century BC to the 1st century CE) and consists mostly of humans parasitized by a prehistoric endoparasite called Echidna (named after the Dracaena famous for giving birth to numerous monsters in Greek mythology), which parasitizes and radically alters the entire physiology of a wide variety of organisms from the phylum Chordata.

In lieu of horses, the Degenerates use a variety of parasitised animals as mounts.Two of these animal-spawned Degenerates include Cerberi and Orthri: dogs and dingos that have attained 2-meter heights, lengths of 3.7 meters and weights of 227 kilograms along with gaining extra heads controlled by a central brain located at the base of their spinal columns (Cerberi have two extra heads while Orthri have an extra head). Both Cerberi and Orthri have streamlined sturdy bodies for quick movement, muscular legs that can propel them forwards at high-speeds and a long, slender tail that sprays a corrosive venom capable of melting flesh and bone.

Cerberi and Orthri can be distinguished from each other by their facial structures. Cerberi have heads broader than that of modern canines like those of a Dire Wolf (a prehistoric ancestor of wolves) - suited for grabbing onto large prey. Orthri have long narrow skulls eerily similar to that of Inostrancevia latifrons (a proto-mammalian predator that roamed Permain Russia) and feature two enlarged sabre-like upper canines and slightly smaller lower canines. Orthri use their letha canines as stabbing devices to pierce through flesh and disable prey or a more surgical type of bite in which the incisors interlock when the jaws are closed, allowing an Orthri to slice out jagged edged hunks of flesh.

What sort of bridle would be needed for a rider to control these multi-headed creatures while riding them? 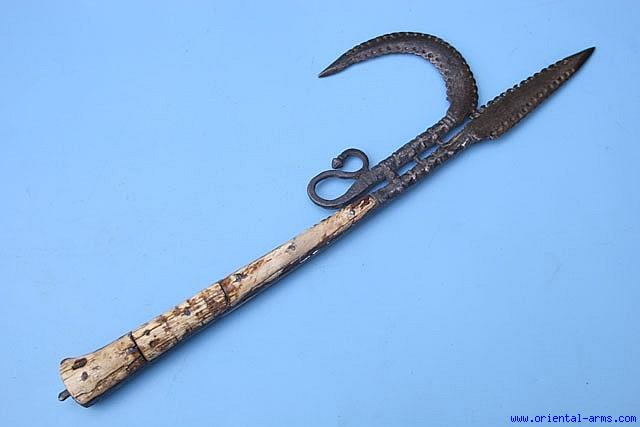 The bullhook is a tool used to punish and control elephants. It is also called an ankus, elephant goad, or elephant hook. The handle is made of wood, metal, plastic, or fiberglass, and there is a sharp steel hook at one end. Its shape resembles a boat hook or fireplace poker. Some bullhooks have long, "shepherd’s crook" cane-style handles, allowing the trainer a firmer grip so that greater force can be exerted while pulling and yanking the hook deeper into the elephant’s flesh.

Both ends inflict damage. The trainer uses the hook to apply varying degrees of pressure to sensitive spots on the elephant’s body (see diagram), causing the elephant to move away from the source of discomfort. Holding the hooked end, the handle is swung like a baseball bat and induces substantial pain when the elephant is struck on the wrist, ankle, and other areas where there is little tissue between skin and bone... A bullhook can easily inflict pain and injury on an elephant’s sensitive skin. Trainers often embed the hook in the soft tissue behind the ears, inside the ear or mouth, in and around the anus, and in tender spots under the chin and around the feet.

Your riders use a long handled goad like the elephant goad. Elephants are directed using such a device and so too your fierce mount. The rider could use the device on misbehaving heads, and also other places on the body. You could have your carnivorous mount move away from the pain much as an elephant does.

Plus a long handled monster goad would be badass.

I suggest learning a bit (pun not intended) about how bridles are actually used in horse riding, because you seem to have the mistaken impression that it's a matter of using force to control your mount. It's not: the neck of your horse (and almost certainly your carnivorous mount) is much stronger than your arms.

Other than rare emergency situations (see "one-rein stop") you're seldom exerting more than finger pressure on the reins. It's a signalling device - and indeed, with a well-trained horse & rider, you do as much or more with weight shifts & leg pressure as with the reins. Better riders than I sometimes even dispense with bridle altogether (do a search on "Stacy Westfall" for some examples), though personally I think it's mostly just showing off :-)

Even with a horse (non-carnivorous, though they can bite pretty well if they're so inclined, and kick), it's much more a matter of the horse being trained to be willing to carry a rider, than of the human forcing itself on a horse. A lot of it involves taking advantage of the horses' herd dynamics.

With a carnivorous animal, that's going to be even more important. Perhaps a good parallel would be dogs: you get the carnivore* to regard you as a fellow pack member rather than as food. Then, if they're fairly intelligent & well-trained, they'll willingly follow directions. But your carnivore is going to have to be a pack animal. Training (a larger version of) wolves would be possible; tigers almost certainly not. And to train something like an alligator? No way.

26
Would it be plausible to ride a rhinoceros into battle?
8
What qualities are needed for a blind archer to effectively hunt from an air mount?
10
What would be needed to travel through sand?
4
Multi-purpose Fictional Chemical Element Needed
6
Reality Check: What sort of jaws would a venomous and omnivorous creature have to carry a human in its mouth?
3
How big would a giant pig need to be in order to carry a 10-foot tall humanoid on its back?
7
The plausibility of a mind-controlling and genome-altering pentastomid
22
Would it be feasible to have a wolf as a mount?
5
A three-day carriage ride, how long would other methods take?