Is it possible to have (near future) satellites that appear to rise and set like the sun and moon?

And if I wanted them to appear about 10 times the size of the sun and moon, would this be possible? Should they lie inside LEO or beyond it? I would like their orbit to be considerably closer than the moon's orbit. How big would they have to be, and how far away? Would we be able to feel their gravitational pull?

First: how big to appear as big as the moon if in a typical satellite orbit? Here is a fine image of the ISS passing in front of the moon and we can use it to gauge their relative apparent sizes. 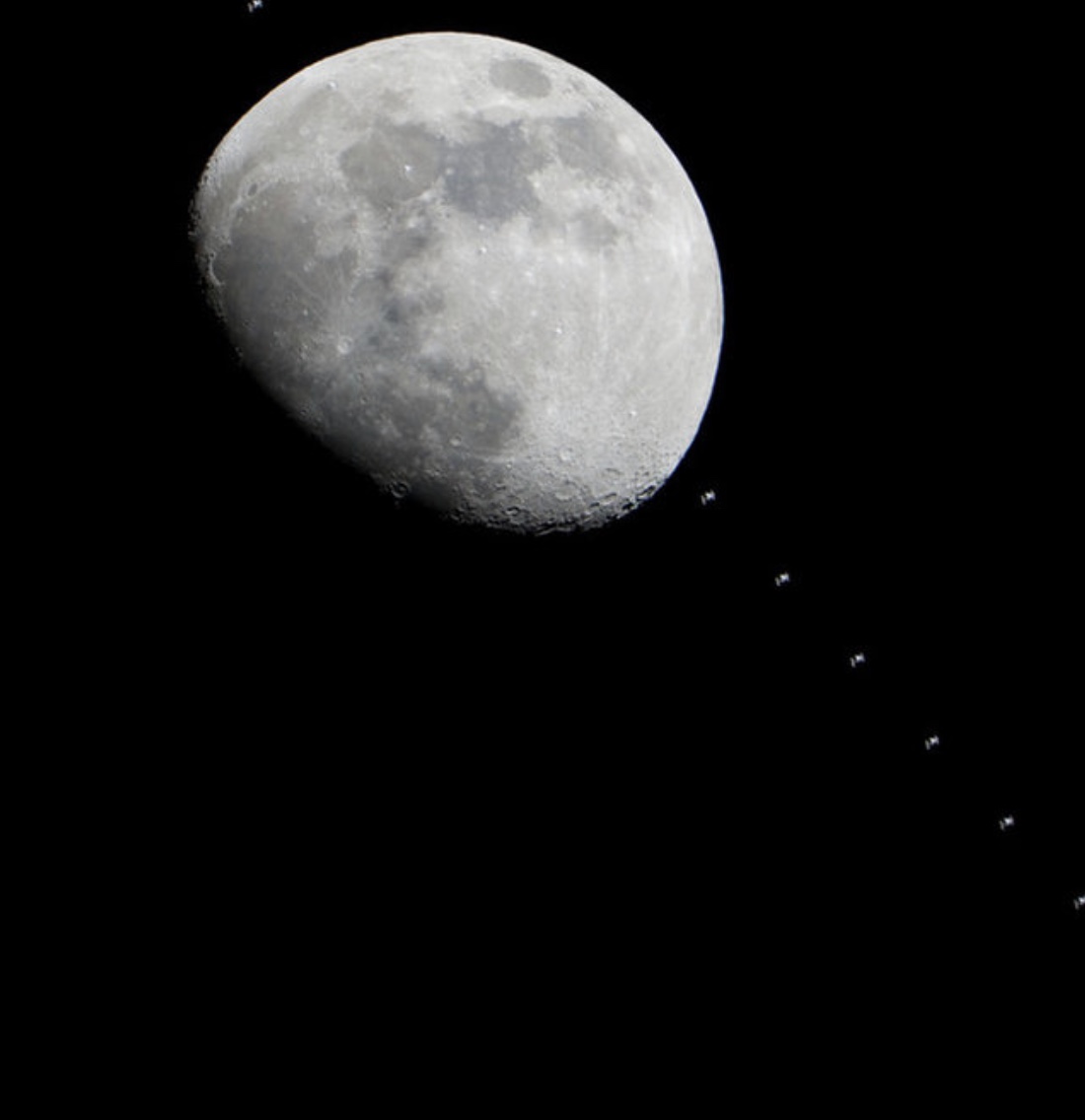 I found this excellent (but perplexing - what is this guy up to?) proposed solar shade which happens to be exactly 4 square km! 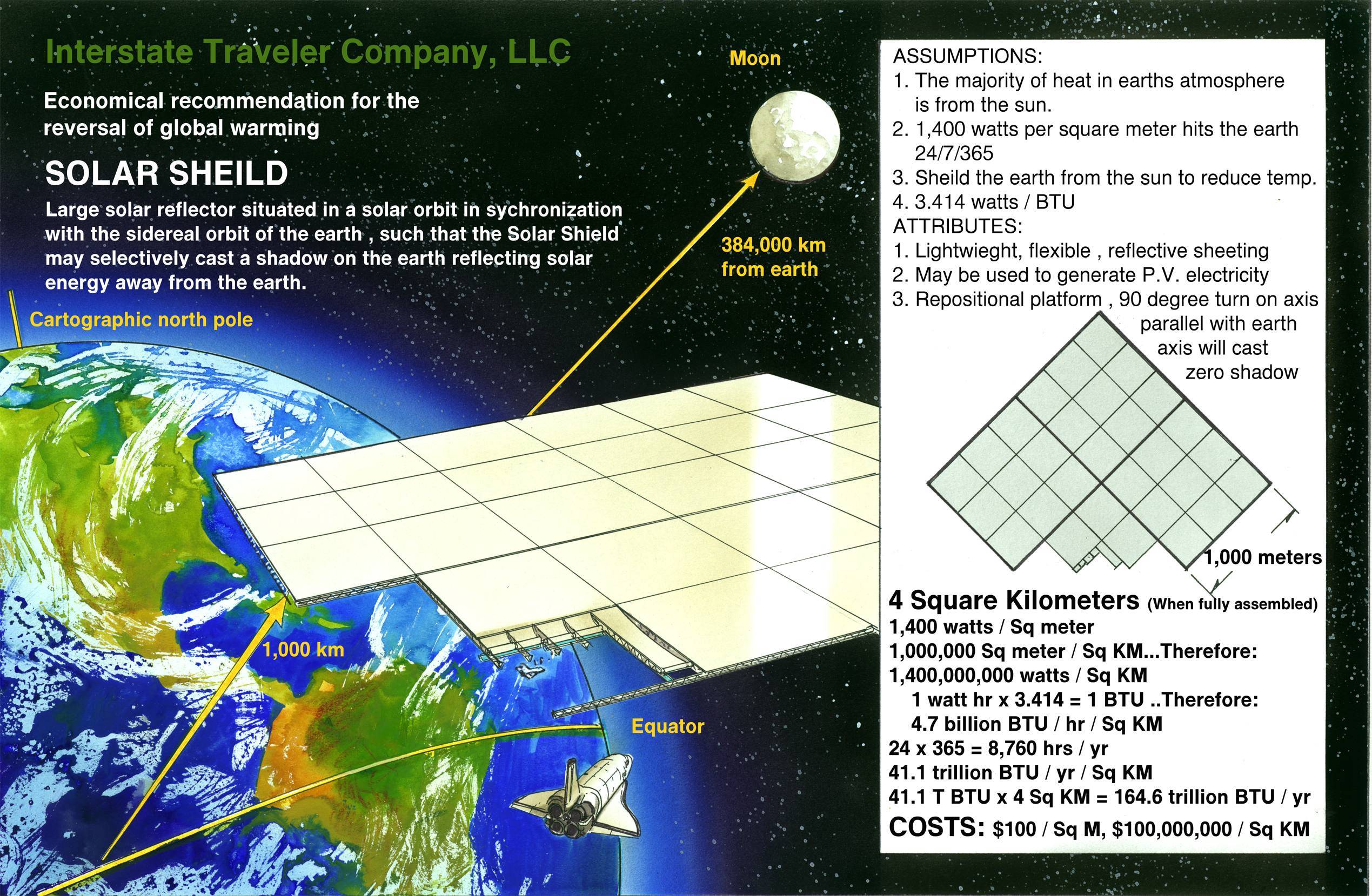 Space sunshades for power generation or earth cooling have been mooted since the 1980s. Yes, I meant to write "mooted", and mooted in all seriousness by serious people. The space sunshades were.

Here is another proposal. From http://environmentalresearchweb.org/cws/article/news/27020

A 1992 NAS report suggested a slightly less extreme project, which would involve lofting 55 000 "solar sails" into orbit around the Earth, each with an area of 100 sq. km. These would block out about 1% of sunlight, but avoiding collisions would be a space-traffic controller's nightmare, warns Michael MacCracken of the Climate Institute in Washington, DC. 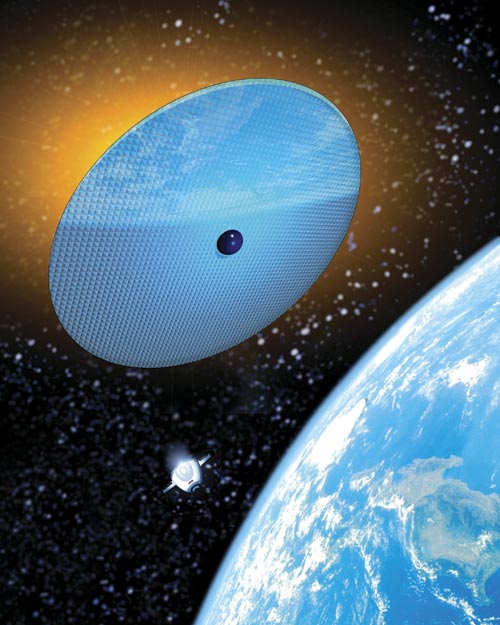 So yes: superlarge satellites are a plausible, fine and desirable thing. Cool the earth, generate power, and show movies.

For completeness sake: 1: How big would they have to be - we covered that.
2: How far away - we used the ISS as a reference point and it is 408 km up.
3: Would we be able to feel their gravitational pull - no, because these are wafer-thin satellites.

At 20,000 km a satellite would make two full orbits a day. If it is orbiting in the same direction as earths spin, it would appear to an observer on earth to orbit once a day, rising in the west and setting in the east. The Earth - moon Roche limit is about 10,000km so you could just move the moon closer without worrying about tidal forces tearing it apart. From 400,000 km to 20,000 km is 20 times closer so it will appear 20 times larger. The effects on the tides will be noticeable and I would expect other noticeable side effects, but the actual pull of the moons gravity when overhead will still only be one tenth of a percent of a g, so we probably wouldn't be able to notice the change.

A satellite in this orbit would need to be 23000 km^2 to match the moon in size. Borrowing from Wills answer, this size of solar panel / sun shade seems possible. This does not seem like the most practical orbit for this sort of project though.

So for a satellite to appear Moon-sized, it will need to be ~ 1 / 1,000 of the Moon's diameter, or around 4 km. That's pretty big, but not impossible. To be 10 times as large, that's now 40 km which is really very large indeed (although not quite Death Star-sized, according to Google)

Anything that orbits in something other than a geo-stationary orbit should rise and set, albeit at a different rate to the Moon and Sun. So if by "like the Moon" you mean at the same rate then no, as that would require a vastly larger orbit (and thus a massive satellite); whilst LEO will give you a total orbit time in the order of an hour or two.

Is it possible for satellites to rise and set like the sun and moon? Yes it is if they are in the right orbit.

Frame challenge: you do not need satellites, use balloons instead.

Current technology is fine. Costs will be steep, but not as steep as the space based solution.

Have huge balloons flying around. The closer to the ground, the smaller they can be, but higher ones will present a better illusion and be less vulnerable to being seen from the side by a plane or a tall tower.

It's not feasible in the near future for something so big and in the atmosphere to go around the world in a day. But consider the following scenarios:

Yes, it's a hack, but note that the Sun and Moon rise and set by different mechanisms from one another, so I think the appearance might be the most important thing.

If this suits your needs, please ask another question for the size and speed estimates and for the detailed ways that the illusion can subtly fail.

Not the answer you're looking for? Browse other questions tagged science-based reality-check gravity orbital-mechanics climate-change or ask your own question.

54
Is it possible to have a planetary system with planets having perfectly synchronized orbits?
2
What mechanism could be used to create an eternal night?

4
When the Moon comes crashing down (wait, it doesn't)
11
What are the parameters of a planet having multiple moons?
11
Can one or multiple moon(s) pull the sea around my planet?
2
The effects of gravitational pull in a solar system with a pendulum Sun
10
What is the maximum orbital time for my moon around my planet?
7
160 Year Solar Orbital Period & 1.9 Year Moon Orbital Period - Is it possible?
10
Moons in Binary Orbit
3
After surviving a black hole/wormhole, what are the chances of Earth start orbiting in a new solar system?
6
The Earth and Moon resolidify under a bluer star, their outer layers evaporated and burned away. What do they look like now?