Writing a werewolf story, and decided for a bit of flair, so I wanted two moons in orbit. Did a bit of digging, and I found out that to do that, I'd need to either have them in separate orbit (no thanks, I like calendar math, but that's the irritating kind, not the fun kind) or to have them in an L4/L5 position. Didn't like that either. So I dug a bit more.

Then I found binary star systems. Yes, I'm aware that this exact question has been asked. Except, it kind of wasn't. See, the answers seem to going towards where the moons were orbiting at each other's L3 point. That's not how a binary star system works. (Watch the video, it's cool.)

Instead, the stars share one of their foci, and kind of orbit around each other, given that. So, would it be possible to replicate this on a planet, having moons that share a foci on the Earth, and opposite orbit patterns. So, while it would appear from the planet that there are two moons in the same orbit, perfectly opposite each other, in actuality it'd be different. Something like this: 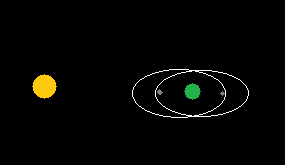 (You'll probably need a guide to the picture, given that my talent is more scientific than artistic. The big yellow one is the sun, the green one is the planet, grey is moon, white is approximate orbit. And because I need the obligatory joke, 'Dammit Jim, I'm a scientist, not an artist'.)

The question is, would this work?

A note: For calculations, assume the planet is the size of Earth, or of a habitable nature, so 6x1024 kg. The moons must be visible, so assume around 1022 kg. The solar system is a single star, and the other planets are a single gas giant deep into the system and an asteroid belt beyond that.

Your initial configuration, with the two moons orbiting perfectly out of phase, is not a stable one.

Over time their orbits will change very slightly as the result of various random effects, such as asteroid strikes, which will not affect both moons identically. The moons will tug on each other in surprising ways. Just read up on the three body problem and you'll see what you're up against.

This means that one moon will start orbiting ever so slightly faster than the other, at which point they will no longer orbit in perfect antiphase. As time progresses, the angle between the two moons decreases, which will only serve to amplify any instabilities in the system. Eventually they'll reach some minimum separation, which will be when the magic happens.

Edit: a CVn pointed out, with depressing plausibility, that what will probably happen is that one of the moons will simply get ejected from the Earth-Moon system and end up in a solar orbit.

Turns out you don't have to guess too hard at this sort of thing, but can instead just go look at someone else's simulator. I haven't actually researched how plausible the one I found was, but hey: it has actual greek letters and stuff in its configuration, so it seems pretty serious to me.

Behold, my two moon simulation, using "gravity simulator". One identical copy of the moon is placed next to earth, with an argument of periapsis in opposition to the regular moon. As anticipated, the moons slowly end up with their separating angle reducing, at which point one of them simply gets booted out into solar orbit. No earth shattering kaboom. Physics is so disappointing, but I console myself that it is just a simulation and in real life it might have been so much more dramatic.

You should fiddle with the simulator yourself, if you have sufficient patience; it is somewhat user-unfriendly, but workable. If you reduce the masses of the moons by at least a factor of 10 then you end up with something that merely looks a bit chaotic (and will probably fly apart given external gravitational influences, like your gas giant). Maybe if the moons were a hundred times lighter you'd succeed in getting them to work, but at the cost of your lovely big moons providing a scenic backdrop to your planet. Maybe your complex calendar system doesn't sound so bad anymore?

Here were my previous ideas, prior to running a simulation. The observation about the size differences between the moons and their parent is probably the important bit.

In our solar system, we have the moons Janus and Epimetheus which are co-orbital. They close within about 10000km of each other and then effectively swap orbits and slowly separate again, only to meet and swap again four years later. This is the best case scenario for your moons. It does mean that you do end up with moons in different orbits, and yes, that means you're going to have funny calendars. But conjunctions are cool, especially ones you can see so closely.

On the other hand, the parent planet of Janus and Epimetheus, Saturn, is about a billion times heavier than they are, which I suspect imposes a certain amount of stability on the whole system (or at least, stabilises it over a much longer timescale). In your example, the parent planet is only a hundred times heavier or so, and that does not fill me with warm fuzzy feelings.

These final ideas are clearly wrong. but I'll leave them here for future reference, if only to discourage later readers from making the same mistakes!

I'm not a skilled enough orbital mechanic to tell you exactly what happens next, but I suspect that it will be one of two things: your moons crash into each other, resulting in a Really Exciting period of meterorite bombardment on your planet... the sort best observed from a different planet. You'll get a funky ring system for a bit, which will be nice. 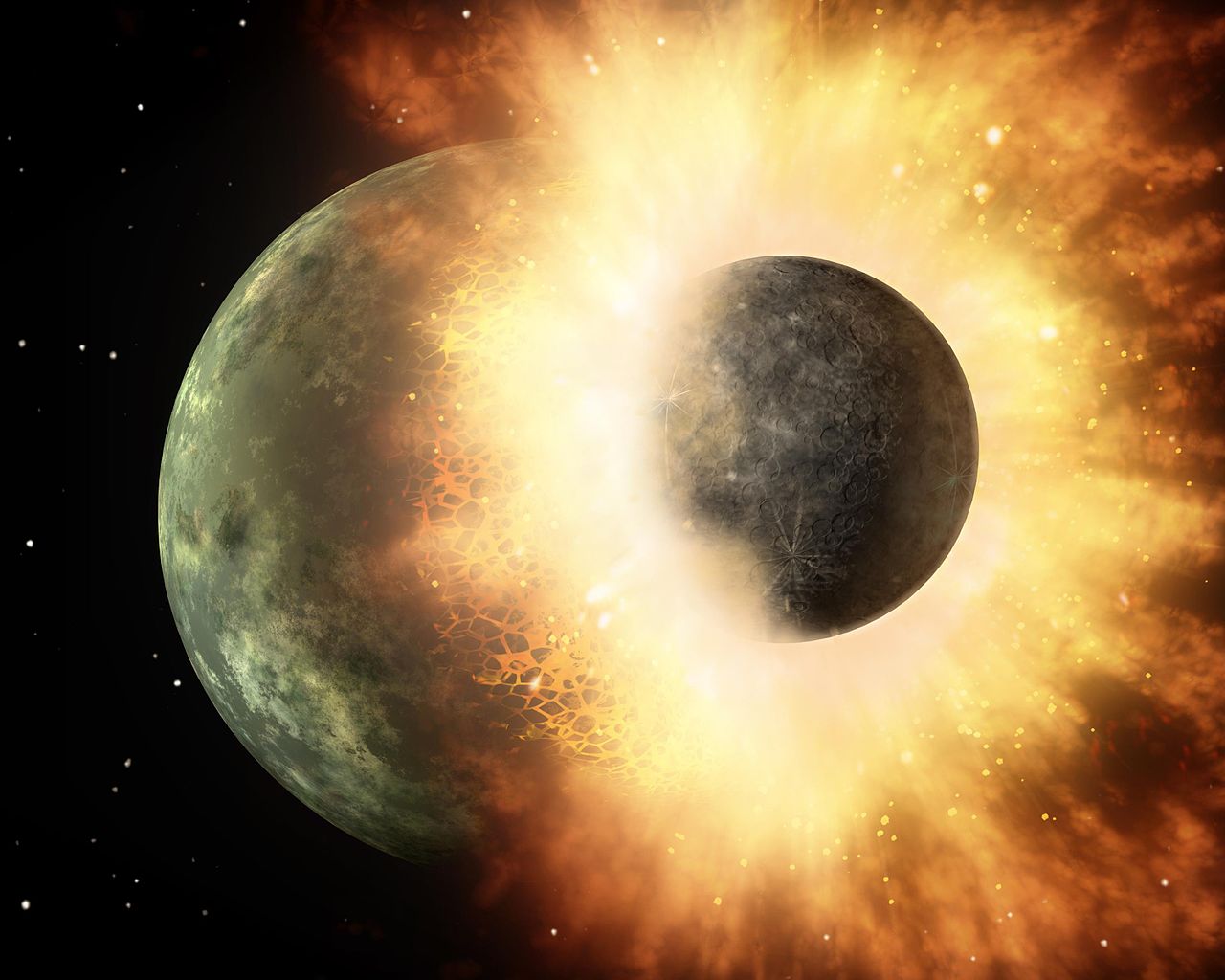 Except, y'know, twice as much.

Not the answer you're looking for? Browse other questions tagged science-based moons orbital-mechanics or ask your own question.

6
A Binary Sun, A Hot Jupiter and a Binary Mars…All Within View of Earth
8
Stability of Multiple Moons
6
About how many planets are plausible for this binary-star system?
12
Two planets in a stable horseshoe orbit?
1
Is it possible for a planet to orbit a binary system at the same speed as the stars themselves?
12
Horseshoe Orbits
2
Could a gas giant have two earth sized moons in binary orbit around it
7
Co-orbits and Tides
7
How far should second star be in my binary system?
4
How can I calculate and create a calendar for one of 4 moons of a Jupiter-like planet?