After surviving a black hole/wormhole, what are the chances of Earth start orbiting in a new solar system? 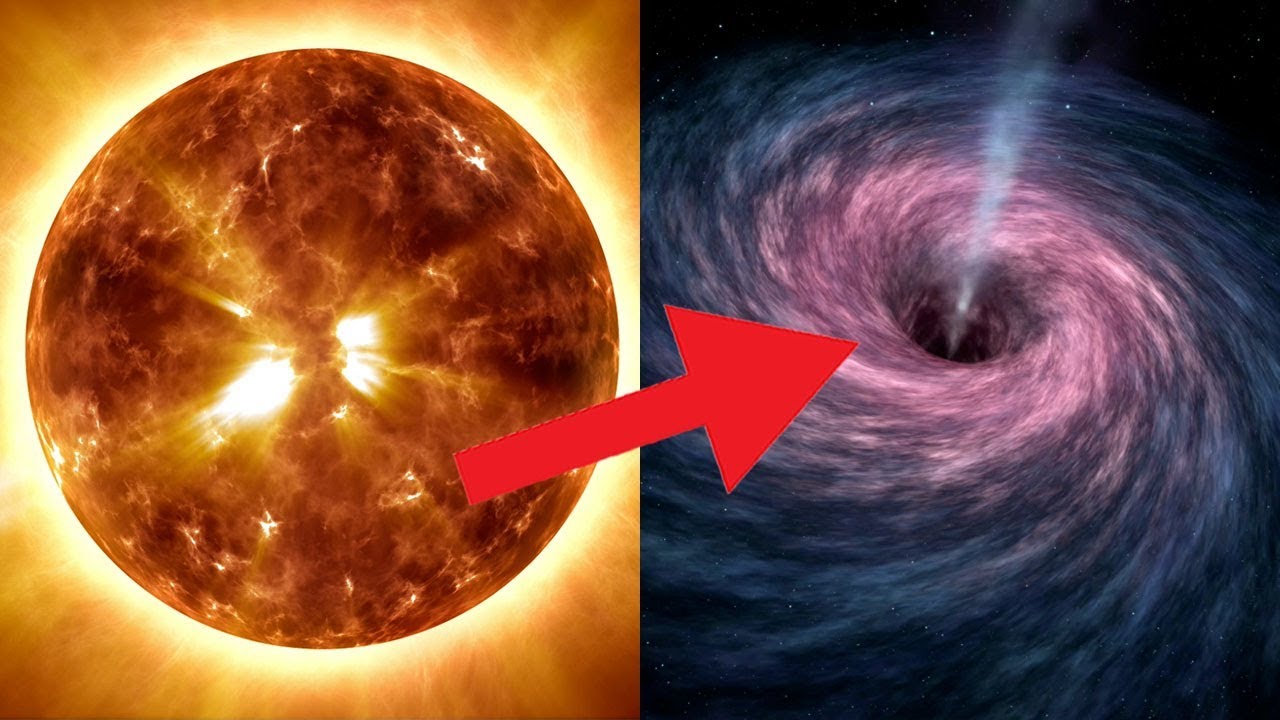 In the event of our sun suddenly becoming a black hole or wormhole of sorts. It transports the earth to another solar system similar to ours. Would it be possible for our planet to start circling around that sun?

The earth surviving a wormhole does not need any explanation or calculation. It survives, okay, END OF STORY.

My question only concerns the possibility of our earth being spit out in a new solar system. Either orbiting around the new sun or around another nearby planet(size of Jupiter) as a moon. The relocated conditions on earth does not need to be able to sustain life on the surface.

Please give answers relating to the sun's/planet's gravitational force that would be needed to pull the earth into it's orbit. THANK YOU.

To orbit a body with a close orbit you need a very specific velocity vector, anything different will either make you hit the body or skip past it.

Since you mention that the planet has left the previous system, it will likely have a very high velocity, else it would have been remained bound.

Since space is practically empty and the planet has no boosters to alter its velocity, there is no way to dissipate its kinetic energy and thus lower its velocity with respect to another body.

I am not counting impacts as an effective way to slow down the planet because, well, an impact big enough to sensibly reduce the velocity of a planet would surely melt its entire surface and I don't consider it as "surviving".

You are looking for the elliptical orbit equations.

Specifically, if your wormhole spits earth out at velocity $v$ and radius $r$ away from any gravitationally-massive body of mass $M$ :

and $a$ is the semi-major axis (or radius at apogee)

Since the question indicates it's unimportant whether such a distance is close enough to support life or an environment, I think that's all you need to know. There are a lot of options available for different initial conditions of semi-major axis, mass of the body being orbited, and initial velocity.

But to answer "what are the chances" ?

As others answered, there are an almost limitless number of combinations of velocities and distances that prevent capture. But, we can figure out a limit. Look at the velocity equation, $v = \sqrt{\mu ({2 \over r} - {1 \over a})}$. The velocity decreases as the radius increases.

There exists a distance from a gravitational body where almost all numbers for velocity $v$ are too high.

It looks like Oort clouds hold onto things around stars up to a distance of around one (1) light-year (although the specific distance varies with the mass of the star) :

You mentioned that you wanted the Sun to become some sort of black hole or wormhole that transports the Earth into a different Solar system. Previous answers have talked about how unlikely a random exit into another Solar system. But what if the exit wasn't random because someone else caused the wormhole to form in the first place? 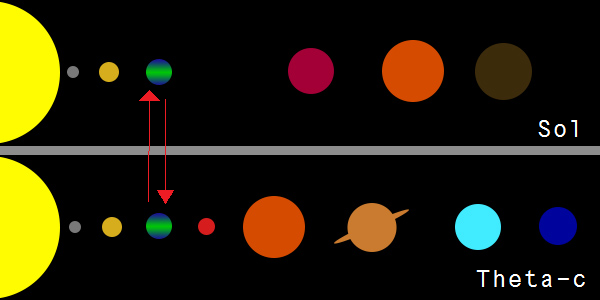 The apparent age of Theta-c is 4.7 billion years, exceeding the Earth's approximate age by around 0.2 billion years. The development of both anaerobic and aerobic life assisted in the creation of this planet's ozone layer, although aquatic-based lifeforms were more prominent in Theta-c's development of sentient life. Its gravitational force is 9.582 m/s2, just below that of Earth's. Each day on Theta-c is just above 24 Earth hours. For every two centuries on Theta-c, there is approximately one additional Earth day.

It should be noted that Pycole and Earth are very similar, with similar ages, distance from the Sun, gravitational constants, rotational speeds, and forms of life.

The former Sol system, prior to Event 2047-1, contained a single main sequence star of 1.0034 solar masses.

It should also be noted that the original Sol and Theta-C (what we know as the Sun) were also extremely similar.

This wormhole that swapped the two planets was not a naturally occurring event, but instead generated by the inhabitants of Theta-C as part of an "interstellar exchange program". It would stand to reason that, given sufficient levels of technology, this exchange could be controlled such that Earth would exit the wormhole with the proper orbital and rotational motion so as to not cause significant (physical) damage to the Earth. We know the Earth would be stable in that orbit because the very similar Pycole was already stable in that orbit prior to the swap.

But "Aliens did it, handwavium, etc" is boring, and not the only reason why I bring up SCP-2047.

Day 1, 7/13/1973: At 00:01:01, Earth and an exoplanet designated Theta-c undergo an exchange of spatial position. Earth is deposited in Theta-c's previous solar system, while Theta-c takes Earth's spot in the old Sol System. The process occurs instantaneously. No contact can be established with the lunar Minerva project. (See Supplement 2047-E for information on Theta-c.)

Day 2, 7/14: Radio transmission is relayed through SCP-2047 at 01:32:57, via its spatial anomaly and multi-locational existence. Radio transmissions are initially audible and are initiated in an unknown language (presumed to be one of those used on Theta-c). Over the next 12 hours, the language converts into increasingly fluent English, until full communications between Earth and Theta-c are established. Theta-c's "interstellar exchange program" is first described. The Foundation requests a reversal of Event 2047-A. Theta-c responds with denial.

Day 113, 11/1 : Knowledge of Event 2047-A eventually spreads over the first two weeks. The Foundation has no viable method of hiding the knowledge of the cosmic shift. Religious institutions experience a peak in attendance, and some reform their values to accommodate for this event, while others dissipate entirely. No knowledge of the existence of other sentient life reaches the public. As news of the loss of the Minerva project reaches the public, however, general anxiety increases. Foreign relations between major powers become strained as the United States, Soviet Union, and China enter a space race to explore the new solar system. The Middle East experiences a non-violent wave of protests and demonstrations in response to the upheaval of the known world, and unrest with their civil governments. Containment efforts by the Foundation are beginning to become problematic due to the Foundation's use of resources on continued efforts to prevent societal collapse. Requests to Theta-c for assistance are denied. (See Supplement 2047-F for information on previous exploration of the solar system.)

Day 286, 4/23/1974: Containment of Keter-level SCP objects grows increasingly difficult and strains a majority of Foundation resources. Hostilities between nations increase as they become increasingly suspicious of one another. The United Nations becomes a strained force, not very effective in mitigating the deterioration of relations. Southeast Asia experiences a systematic political repression as China falls behind in the Space Race, followed by religious accusations in response to the increased volume of religious activity. Requests to Theta-c for assistance, following a presentation of detriments to the human race, is approved.

Day 339, 6/17: A collaboration between Theta-c and Earth is initiated in order to attempt to reverse the detriments of Event 2047-A. Theta-c announces to the Foundation that reversal of the entire process is impossible, but suggests that a localized reality reset may be viable. Using a combination of SCP-2047 and Theta-c's technology, a CK-class Reality Restructuring Scenario is created, and includes a mass change to astronomical data, records, and memories revolving around the field of astronomy. This restructuring also resets the date on Earth to July 13th, 1973. Foundation staff at Site-88 (which houses SCP-2047) maintain full records relating to Earth's previous location, and are excluded from the reality restructuring in order to facilitate the further suppression of knowledge. After a full debriefing of top Foundation personnel, the residents of Theta-c are informed that further collaboration with the Foundation would not be continued due to an unacceptable risk of societal collapse stemming from uncertainty relating to previous events.

Based off what kind of story you wish to tell, you can go in any number of directions from the initial swap.

Do you want the planet to survive, but completely destroy everything on the surface? Screw up the transfer. Even placing it at the proper distance from Theta-C, and with the correct orbital velocity, a drastic change to the rotational speed of the Earth should be sufficient to kill almost everyone on the planet and covert anything less stable than a nuclear fallout bunker to rubble.

Do you want the planet to survive but have everyone kill themselves? Or do you want a world buried in conflict? Or do you want a Fallout type world? Etc? Take out the part where Theta-C and the SCP Foundation reset everyone's memories. It wouldn't be a huge leap in logic that society, after public knowledge of this swap, could go in any direction you want it to go. Even if you don't want to wipe everything out but make everything be much weirder, you can go this route and avoid the complete societal collapse that was implied to be starting in the log.

Do you want there to be some sort of conspiracy about the whole thing or a mystery? Go with a similar storytelling device to SCP-2047 and have some secret organization wipe everyone's memories.

Yes, it will, but it would need thousands and millions of years to get to stable orbit and it would unlikely be in habitatable zone (but this is not required, as I undestood).

The only condition is - the starting speed should be less then escape velocity for that star. For the Sun it is about 600 km/s near photosphere, 50-30 for inner planets, about 15-7 km/s for outer planets, <2 km/s for faraway regions.

The direction of velocity would greatly affect the form of the orbit - in most cases Earth's orbit would be highly eleptical, comet-like.

It would greatly disrupt existing planet/moon system. This would lead to heavy asteroid bombardmend and even to a small risc of interplanetery collision and/or gravitational catapulting of different bodies from star system. But after a couple of thousands-millions years everything will settle down on new orbits. But exact parameters of this orbits are higly unpredictable and it is very unlikely that new Earth's orbit would be in a habitatable zone or even be as circular as it is now.

As for gravitational parameters - anything more than 10 times of Earth mass would go. With great "luck" (i.e. plot demands) it even can become sattelite of some rocky superearth (about 3 times larger than the Earth itself). But this need very precise "insertation". As for stars - any one is good with quite a low "demands" on precision.

Not the answer you're looking for? Browse other questions tagged orbital-mechanics earth solar-system black-holes rogue-planets or ask your own question.

20
How would the sudden destruction of Earth affect other planets within the Solar System?
2
Scale down the Solar system according to Earth
3
What does the solar system sound like?
2
What are the realistic problems of a planet orbiting too close to its sun?
25
How do you non-catastrophically reduce the mass of the Sun by half?
9
If the Earth was part of an ultimate solar system, what would the sky look like?