Could I make this dark and eerie world possible?

The inspiration came from the music in the title sequence of the film Alien. The idea is a planet that humans have colonized where it's almost always drizzling slightly. It's always dark but there is a visible sun and it can sustain life. The sun would be small and a bluish tint. How could this be possible?

Or dust, or volcanic ash. The haze will make it dark and gloomy and if you do it right, the suspended particles will make the sun seem small and blue via the Rayleigh effect . 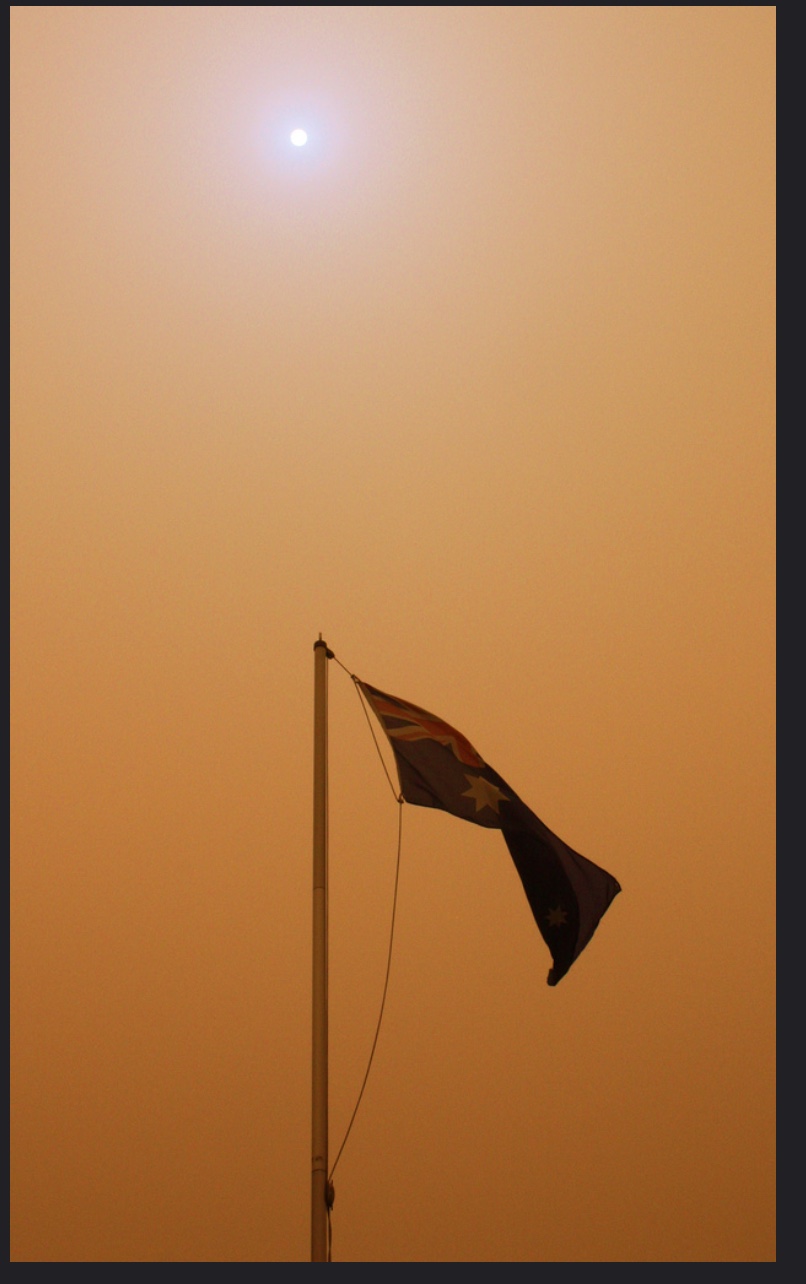 Particles of size around 1 micron affect red light more than blue. This unusual situation makes the Moon or Sun appear bluer. It would not be notable against a blue sky, but in such conditions the sky will become greyish (and perhaps even red): the contrast between the sky and Sun makes the Sun appear blue. It is magnified by the tendency of the human eye to assign colours in contrast. Photographs (this one from Brisbane, 2009) of the effect tend not to be show it as well, but the effect is marked to the eye. It only works if the particles are of quite uniform size: mix grains of sizes which are different by more than 50% and the effect goes away.

First, if there are always clouds all over the planet but it should still be warm enough to sustain life you need a stronger sun. Make it a hot blue star so you automatically get your blue color even without Rayleigh effect. Move the planet further away from the star to make it appear smaller.

Usually on earth if your clouds let the sun shine through they're not thick enough to produce precipitation, e.g. Altostratus translucidus.

Instead the only clouds that produce rain are Cumulonimbus clouds which are out of question for your scenario and Nimbostratus clouds.

You want the latter, you want a layer of thick dark clouds which constantly produce light precipitation. If your central star now is much stronger than the sun it's entirely possible that it still shines through those dark clouds. Also a cloud layer that procudes only drizzle is usually not that thick, maybe 1-2 km.

That kind of scenario means that the star's radiation is so strong that life can only thrive because of the clouds, otherwise it would be a dead planet. That means essentially that there is a strong capping inversion in the atmosphere above your cloud layer that traps the clouds and moisture below while above there are hot and hostile conditions.

Given that in clouds with bigger particles forward (Mie) scattering dominates you can have dark clouds with a bright star. If you had an open sky Rayleigh-scattering would dominate and you had lots of light coming from the whole hemisphere.

Yes it should be possible. If life developed on that world then it would be adapted to those conditions.

Life quite possibly started without the need for sunlight at all, we have life on Earth that doesn't get it's energy from the sun.

Plant life that is dependent on sunlight is really a matter of the Photosynthetically Active Radiation, so while Earth plants wouldn't be too happy as they won't grow in just blue light, plants whose equivalent of chlorophyll does use blue light may thrive enough to build an ecosystem.

Always drizzly would require a happy equilibrium between heat retention and heat loss with large bodies of water evaporating enough moisture into the clouds to keep them going relatively well.

You're main issue would be having the whole planet weather homogeneous without areas of cold and relative hot like our equator and poles. Because this would mean your basic weather would need to be driven by the cloud cover rather than just the sun, and this would have to be very serendipitous indeed not to either go the way of Venus with rampant warming or fail at least periodically in some other way with disastrous effects. But with a fairly light atmosphere it could work. I'm thinking massive global warming on the bottom mitigated by massive heat loss on the top.

Not the answer you're looking for? Browse other questions tagged planets aliens atmosphere stars day-night or ask your own question.

7
Is this shattered planet scenario possible?
3
Strange night-day planet design
17
How can I explain alien skin being different colors?
5
Looming spaceship in the skies. Height, size, radius?
2
Is this habitable moon possible?
13
Is my Solar System scientifcally possible?
1
Is this model possible? Fast axial precession + tidal locking
6
What are the day and night fluctuations for a moon orbiting a planet the size of Jupiter?
7
160 Year Solar Orbital Period & 1.9 Year Moon Orbital Period - Is it possible?
30
Can there be plants on the dark side of a tidally locked world?