Is my Solar System scientifcally possible?

I'm heavily ignorant when it comes to mathematics and just science in general, but I have thought of four habitable planets, all of them revolving around a K-type sun. They're all colonized by humans, and i'm trying to come up with the geography and size of each planet. I would love it if anyone could look at what I have written and correct me, as well as fill in blanks on what they think my planets would look like or have.

I'll write them in order from closest to the sun to farthest. Currently I have not thought of moons.

Labita: In size, it's small, the smallest planet currently. I'd say a mass and radius directly similar to Earth. Labita's surface is 64% water.

Vir: Slightly bigger than Labita. It has a surface that's 72% water.

Mena: Surface is 60% water. smaller than Vir, but bigger than Labita.

Kaldreer: A superhabitable (large with heavy gravity) planet. I'd say it's surface has at most 77% water. Warm, and a thicker atmosphere.

My first concern is the orbit. I would say they would mimic our own solar system's orbit, but I don't know how far away they would all have to be to not collide, and if the distance they'll be from the sun is safe enough.

My second concern is their size. I know I definitely made some mistakes, but I know for certain that I want Labita to be the smallest, then Mena, then Vire, then Kaldreer. I want Kaldreer to be significantly bigger than Labita, but not too big that it would unsafe for human life. How big and how small can I make Kaldreer and Labita before it's unsafe? (Update: would it be too far of a stretch to propose the idea that Labita and Kaldreer would orbit around eachother instead?)

Thanks to anyone who decides to read and help me.

First -- K stars are just a little redder and fainter than the Sun. There is no problem having rocky planets in the habitable zone. And the habitable zone can fit as many planets as around other stars (see here for details: https://planetplanet.net/2014/05/19/building-the-ultimate-solar-system-part-1-choosing-the-right-star/).

Second -- there is no issue having 4 planets in the habitable zone. The inner edge for an Earth-like planet is reasonably well-defined as being at about 0.9-0.95 AU (for Sun-like stars, can be adjusted with a simple scaling factor for fainter/brighter stars), but the outer edge is extremely fuzzy and can extend out almost indefinitely. This is just because it's easier to provide energy to a planet's surface (e.g., through a thick atmosphere that retains heat) than to cool it off very fast.

Third -- in terms of orbital spacing, you can easily fit 4 planets in the habitable zone. Earth and Venus are relatively closely spaced (semimajor axis ratio of 1.4, orbital period ratio of about 1.7). If you take a look at systems with small (presumably rocky) planets around other stars, they tend to be as close to each other (or closer than) the Earth-Venus separation. This plot shows some Kepler candidate planets (all smaller than 1.5 Earth radii). The x axis is logarithmic, so the distance between planets depends on the orbital ratios (not the absolute differences). I included a shrunk-down Solar System as comparison (the separations are preserved in the shrinking): 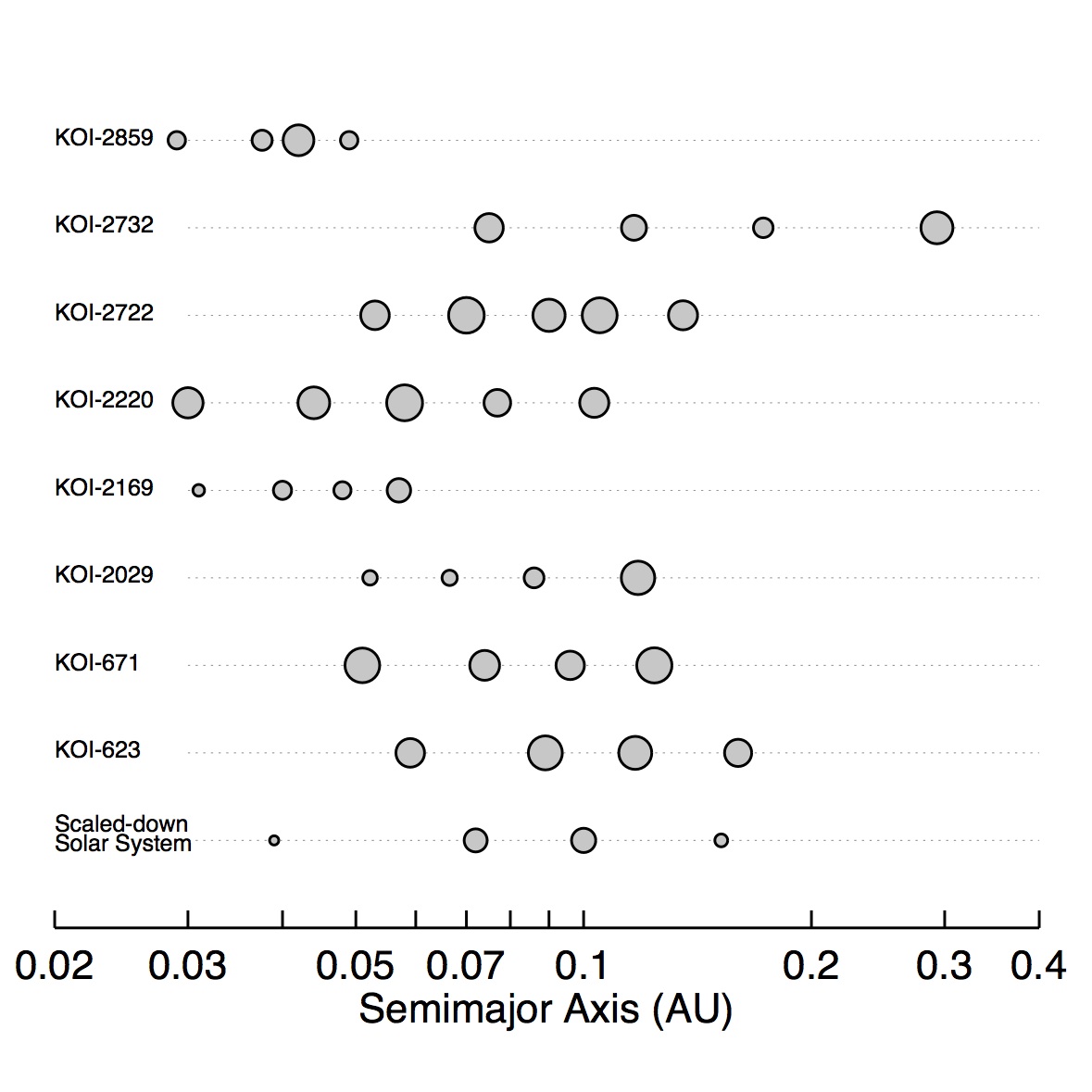 Four planets with the Earth-Venus ratio, starting at Earth's distance, puts the outermost one at about 2.7 AU. With a slightly closer spacing (say, 1.3 in separation), the fourth planet would be at 2.2 AU. This is close to the edge of the "traditional" habitable zone -- if the planet has a modestly-thick atmosphere of something like CO2 or even H2 then it can retain liquid water on its surface.

Fourth -- I did a series of blog posts a while back explaining how to choose stars, planets, and orbits when building a planetary system. It's summarized here (with links to the different posts): https://planetplanet.net/the-ultimate-solar-system/

Finally -- just to counter any criticisms on these points, I am an astrophysicist working on exactly this type of question (specifically, on planet formation and orbital dynamics).

What is a K-type sun?

How big is the habitable zone?

This is something of an open question in our own solar system. There are many estimates. I'm going to go with the range of 0.75 AU to 2.25 AU, since that is easy for calculation.

We can use the inverse square law to adjust this for our slightly less luminous star. The change in distance is the square root of the change in luminosity, so your planets will be distributed evenly at 0.53, 0.88, 1.24, and 1.59 AU from the planet.

Can I fit four planets in there?

The initial conditions are set with Alpha Centauri's mass (0.907 $M_{sol}$) and the four planets as given above. Since you didn't really give masses, I set their masses each to Earth's

The results are graphed below, with time on the x-axis, in 100 year increments and distance from the star on the y-axis. 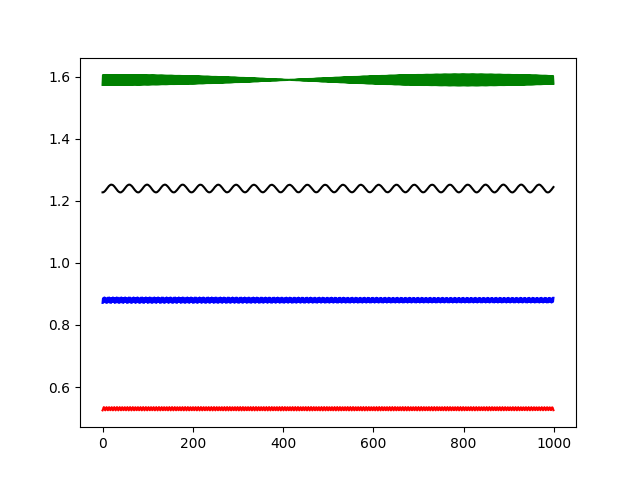 The good news is that none of the planets ends up careening out into space. I kind of expected that to happen, but was able to quickly find some orbital conditions where all four planets would be stable (the key is to start them in slightly eccentric orbits). I integrated over 1 million years and the planets stayed stable (The graph is only for 100,000 years).

The wavy lines are due to orbital resonances. Interestingly, at least for us orbit nerds, the planets straighten each other's orbits out, removing most of the eccentricity. The variations for each planet are about the same magnitude as the variations in Earth's orbit.

Now, this does not prove stability by all means, but I think it is plausible to have four planets in the habitable zone of a star the size of Alpha Centauri B.

What about different sizes?

I swapped up the sizes to make some comparisons. I changed planet sizes from as low as 0.1 Earth to 10 Earth's. I got stable orbital results for all size combinations I ran (though I ran shorter simulations, in this case).

My findings where that a planet needed to be size of Jupiter before it started ejecting other planets from the solar system over the short term. Even a planet up to 10 times the size of Earth won't have enough gravity to put the other planets in wierd, possibly deleterious orbital resonances. That gives you a considerable margin of error for planet sizes.

You can operate a solar system with four planets in the habitable zone. Now, it isn't necessarily clear that you can form a system with four rocky planets in the habitable zone, but if you use some handwaving you can claim that somewhere in the universe this setup came to be. Also, the habitable zone here is a definition stretched pretty wide. For example, the farthest planet will get 22% less sunlight than Mars, so its debatable whether that could ever be more than an icy tundra. But maybe it could be one giant frigid ocean and work well enough for your purposes.

Please ask followup questions about specific planets and their atmospheric and water conditions.

I think that you have too many habitable planets in your system.

In our system Venus is near the inner radius of the habitable zone and Mars is near the outer radius. Look how they turned out. I think that three habitable planets is probably the max before they get too close together to interfere with each other's orbits.

You can have more habitables if one or more are moons of a gas giant.

I suspect that in wanting the inhabitants to be taller on the smallest planet, you are thinking that it has to be lower gravity. That's not always the case. Just look at the range of heights of people on Earth where everyone experiences the same gravity (within reasonable measurements).

As for size of the planets, I'd put the smallest one at about 80% Earth's mass to keep the rest in a reasonable range. However, mass does not have to be directly related to size. If you want the planet to be bigger, it just has less heavy elements in it (more rock, less metal and fissionables).

Not the answer you're looking for? Browse other questions tagged planets orbital-mechanics solar-system or ask your own question.

2
What distances would be involved in this planetary system?
9
How can I find out the length of seasons and solar year on this planet?
7
Question about the possibility of a Ternary planet system
6
I've determined how many planets my solar system could plausibly have. How do I figure out what kind of planets they are?
7
160 Year Solar Orbital Period & 1.9 Year Moon Orbital Period - Is it possible?
1
Observatory on another planet in the solar system
4
Can two stars be near each other?
7
Plausibility of an atmosphere on the furthermost planet of a solar system