Could a Jungle Dwarf tame a Jaguar?

When I posted this question about mountain dwarves, I got a comment about breaking dwarf stereotypes by having Jungle Dwarves with a cavalry of Jaguars. I said if I thought of something, I'd ask a question.

Congratulations that day is now.

Problems With This Scenario

Now, I'm going to start this off by saying that I don't know if a Jaguar can be properly domesticated. It probably can't. This article goes into detail, but what's relevant here is that Jaguars do not conform to a social hierarchy. Dogs are pack animals, and it's easier to maintain control by making that dog see you as a pack leader. On top of that, as obligate carnivores it may be harder to keep a whole cavalry fed than a traditional herbivorous horse cavalry. Although, if you disagree, feel free to say so!

This is why I'm making the distinction of having them tamed. A tamed animal differs from domesticated animals in that there are no distinct domesticated lineages (ex. Dogs vs. Wolves), but essentially are capable of at least tolerating human contact. The closest analogue in real life would be people who have raised and tamed Cheetahs, but those are gregarious animals. The fact that these things are solitary may make that harder. Unfortunately, this may impede the end goal of being able to ride these things, but that's for another post.

By the way, in addition to the difficulties in taming and feeding a Jaguar, this article goes into greater detail as why they don't make great pets. Basically, you need to be very deliberate and good at reading their body language, or a Jaguar will hurt you. It takes a long time for any level of trust to build between a trainer and a big cat.

So what's the question here?

Now that I've gone ahead and laid out the potential issues in taming Jaguars, my question is this:

In my mind, this would likely occur because the dwarves are very stubborn and don't like being told something cannot be done. Maybe the Jaguar keepers are their own class of people, like specialized guilds that train this national cavalry or let wealthy dwarven farmers hire them on to man their security.

So we are in a bit of a pickle, eh? I think we're going to have to give up on massed battalions of jaguar-knights, and shift to the lone-wolf dwarven jaguar-knight errant. But -- but how? Glajja asked!

Start with the females. Raise one or more females from cubs. Pamper them, feed them -- they only ever get their food from our knight or his squire.

Now raise a male, again from cubhood. When he's little, you play with him, you put a doll on his back. As he gets bigger, you put bigger and bigger dolls on his back, to get him used to the idea. It's natural to him now. Some of his food comes from the knight, but his steed must be in touch with his hunter side as well. Now here's the kicker -- the knight plays matchmaker, and when the female is (ahem ahem) "receptive", leads her to the male on a leash. Did I mention he's wearing chainmail during this process? ;D

The idea is to imprint on the male the idea that good things come from your knight.

So hopefully, after all this expensive and time-consuming preparation, dwarf and jaguar are like brothers. And then they roam the jungle together, fighting evil and righting wrongs.

Um. Accidents do happen. Turns out a lot of knights have nicknames like "Peg-leg", "One-hand", or "Good God, man!"

So the dwarves' traditional jungle homeland is safe from intrusion. Where our jaguar-knights run into trouble is on the open plains, what with those dam' snooty elf ostrich-riders...

First, let me say that if you do have a class of people who tame and ride your jaguar-like creatures, that they will likely be raising the animals and controlling their breeding.

If breeding is controlled, that is, if the dwarves are choosing characteristics that make your jags more tolerant of humans and easier to work with, then you are going to get modified jags.

The most awesome thing about it, is that these foxes began to show the variation in coloring that dogs do. It's called the Russian Fox Experiment. Google it if that link goes away. Basically, for about 25 years or so, Russians took wild foxes and selectively bred them for tameness. They now have a domesticated fox that in a lot of ways closely resembles a dog. That's in an evolutionary blink of an eye.

Now, cats, large and small, aren't as domesticated. This is because we didn't choose them for domestic behavior in the same way we did with dogs or in the case of that experiment, foxes.

Will there be problems? Certainly. Domestication will take longer, and will be more difficult, but that doesn't mean that it's completely impossible.

The jags have to be big enough to ride--that's one issue. Riding should come much later.

Your group has to be motivated to keep trying despite difficulty. So, would say there should be a cultural and/or religious link in here that makes a breeding program and selection for tameness an issue and something they keep doing despite set backs. This will make the jags less solitary, more social, and more accepting of humans. Essentially, they will be different from any wild jag on the planet. You ask:

My answer is that you need to look for motivation beyond the practical, and head towards something else entirely. A dynasty of kings that implements a breeding program to get what they need, which becomes a tradition, because their sigil is a jaguar. It's not about cost, it's about prestige. And eventually selecting for the characteristics needed will win out. Or it can be religious-based, or politically based, or, or, or. Domestication on a practical level happens for things like agriculture and hunting, but this can be about something "expensive" and elite. You will have to breed for the physical changes that will be needed. As they are now, they are not quite suited for dwarves to ride. All the problems are solvable, IF it goes on for long enough, although, will say, they will not be as much like the wild version by the end.

Benefits, at first, before success, need to be more about social and societal badassery than about actual practicality. The practical benefits can come later, but they should not be at the root of the initial reason for breeding/taming/domesticating jaguars to begin with.

I worry that riding a jaguar would be bad for its back. Everyone wants to ride big dogs when they are little kids, but it is bad for dogs too. From https://www.quora.com/If-dogs-were-as-large-as-horses-would-we-be-able-to-ride-them

A dog’s run is a series of leaps that require the spine to fluctuate a lot more. It has a weaker back by far than a horse does, because the vertebrae have to be more flexible. If you ride a dog you will break its back. Any problems with its sensitive feet and added pressure will never come into play; you’ll end up dealing with the fact a dog’s back will sag under the weight of a rider and it cannot do what a dog needs to do. The same goes for why we don’t ride lions.

If it is no for dogs and no for lions it is going to be no for jaguars. Especially with dwarves - these are not some gossamer sprite creatures here. 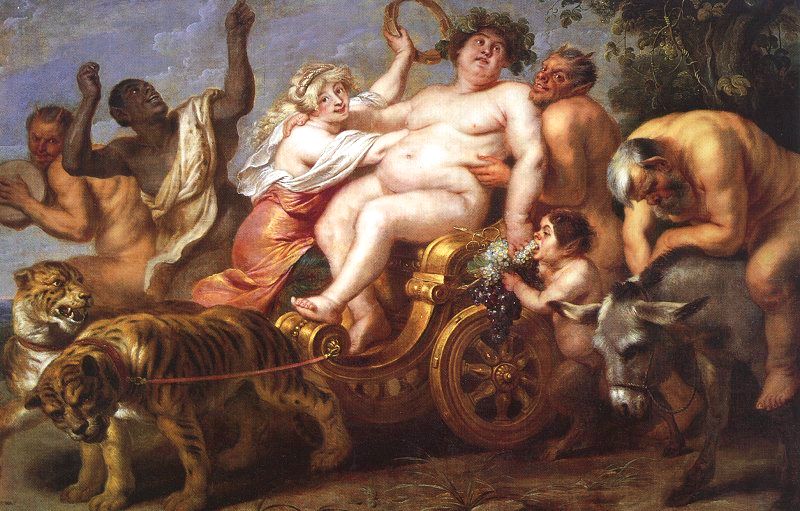 This is us out on the town last year. I think next time we might use proper harnesses and bring some extra tigers; these two went on strike shortly after the picture was taken, and every one except Paul (on the donkey) piled into the chariot. Paul and the donkey wound up pulling us home.

In any case, the principle: jaguar as chariot puller?

Not the answer you're looking for? Browse other questions tagged reality-check fantasy-races domestication or ask your own question.

17
Is it possible to ride a carnivore species?
7
How to make a saddle for a feline mount
2
Argyria and Dwarven Industrial Runoff

22
Could mankind have domesticated the zebra as a riding animal?
4
How useful would small, domesticated, omnivorous bears be?
6
Are genetically engineered dogs that snap and become disloyal plausible?
7
How to make a saddle for a feline mount
8
Entelodont domestication
3
Could Argentavis be Ridden?
5
What animals would a sedentary centaur civilization domesticate?
18
How could our ancestors have domesticated a solitary predator?
3
Are there certain qualities needed for an animal to be tamed?