How to make a saddle for a feline mount

Sort-of sequel to this question.

In that question, I asked about the feisability of domesticating a jaguar with the end goal of making a ridable mount. One good point that was mentioned was that a cat is not exactly built for riding, and that carrying weight could damage the back. This made me think of something that I had read here, about feline-based beasts of burden. While it's more in the vein of cart-drawing cats, there is mention of riding them as well.

Since feline spines are more flexible than horse spines, it reduces their ability to carry weight on their backs. However, a solution mentioned was to have special saddles made that distributed weight along the side of the animal, rather than right on their backs. Think something like a dog backpack.

This leads me to my question:

How would a saddle need to be designed so that a jaguar could handle a dwarven rider?

Now, since I've written the original question, I've been thinking that these jaguars may need to be borderline horse-sized for dwarves to ride. I can buy that there could be selective breeding to make the back more conducive to ride. Also note: the linked source mentions that felines think in vertical space. A feline mount may not hesitate to climb a tree or jump over things. This could definitely factor into saddle design.

When I was thinking about this question, I had originally pictured a jaguar being driven by 2 dwarven jockeys in a dog backpack-like saddle that suspended them on either side of the jaguar. Since the Jaguar is a stalk and ambush predator, speed inhibition may not be as much of an issue. Human jockeys at the lowest are about 126 lbs, but I could cut that down if that's feasible. This whole driving setup probably isn't very feasible, but if anyone wants to weigh in feel free!

The real plus in those dog backpacks is not fact weight is on the sides (weight will pull downward even if it is under your belly and so it will drag on your spine), but fact it distributes weight on a larger part of the spine and they are rigid enough to give a constant weight on about two thirds of the spine, regardless of where the actual weight is.

Main drawback of such an arrangement is it blocks the spine like a corset preventing natural bending; this is less a problem with dogs then cats as they tend to be much stiffer (but still much more limber than a horse).

Back to your jaguar: optimal positioning strongly depends on usage.

For towing or walking at a leisurely pace with relatively heavy weight such a saddle may be used, even if I strongly suspect the animal wouldn't find it very comfortable.

OTOH if you want to use such a ride in battle or in equally changeling activities I advise to use a much smaller saddle moved up so it weights mainly over shoulder blades, directly over support of fore legs, exactly where cats spine is actually stronger and relatively less flexible.

You may want to have short stirrups so that the rider can actually ride standing and help the mount in the difficult leaps, exactly like the horse rider who actually "jumps" together with the horse in order to be lighter while in flight.

Keeping balance on such a mount, especially if it rises on hind legs either to climb or fight may be problematic and some anchorage, like what's on "amazon saddle" may help to keep calf and knee fixed (no swinging stirrups!) while letting raider free to follow movement from knee up.

The "saddle" will be a shirtlike construction, worn by the "rider". This saddle shirt will offer a large padded scruff, which the jaguar will take in its teeth, carrying the dwarf as it would one of its own kittens.

This allows the cat to carry another creature in the manner it is accustomed, taking all the care it would with one of its own kittens. The dwarf has the benefit of hands and legs all free, enabling two-handed axe-swinging and frenzied kicking. 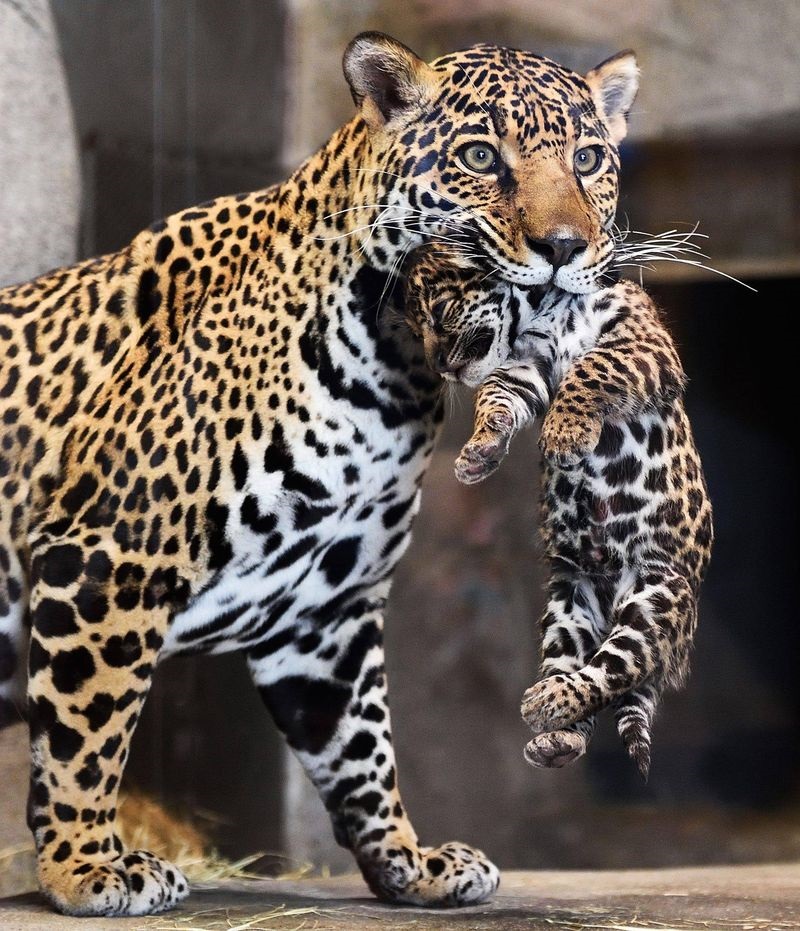 Not the answer you're looking for? Browse other questions tagged reality-check fantasy-races domestication mounts or ask your own question.

2
Saddles for Predatory Animals
6
Could a Jungle Dwarf tame a Jaguar?
6
Reality Check: What sort of jaws would a venomous and omnivorous creature have to carry a human in its mouth?

6
Could a Jungle Dwarf tame a Jaguar?
20
The Biological Dullahan
17
Could you strap shotguns to the back of a centaur to be fired during a charge?
13
Building The "Perfect" Mount
11
Challenges for using a bull as a character's mount
8
Could an octopus ride a bicycle?
8
Can a horse-sized flying creature grab and carry a human's weight while flying?
3
Could Bronze-Age Nomads Effectively Utilize Chariots for Warfare?
29
Would it be possible to mount a working minigun onto the saddle of a tyrannosaurid dinosaur?
6
Horseback Travel in an Unpopulated Pacific Northwest