Could mankind have domesticated the zebra as a riding animal?

There are various arguments on the web stating that the domestication of zebras is impossible, because zebras are bad tempered and skittish, and/or animals elsewhere are even-tempered and friendly. for instance PBS/Jared Diamond article, Brief history of zebra domestication, YouTube video

I think are making the cardinal scientific sin of not comparing like with like. First, they are working from the assumption that the domestication of the horse (or donkey, or camel, or cow) was a two stage process. Namely:

The actual domestication of the horse to a riding animal was in fact a four stage process:

Pretty much all wild animals are vicious and bad-tempered at Stage One of the domestication process. Aurochs had a reputation as ferocious. If you don’t want to believe classical sources like Julius Caesar (who after all thought moose had no knees), then consider the breeds of ‘re-wilded’ cattle (Heck cattle, Chillingham Park cattle) which have reverted to a pre-domestication lifestyle. BBC News report on farmer’s problems with psycho Heck cattle.

So taking that four stage process and 'not as bad tempered as an aurochs' as a starting point, could zebras have been domesticated? Since they weren’t, what reasons could there be for failure?

I’m specifically interested in the plains zebra (Equus quagga burchelli) which has exactly the same social system as the domestic horse and Przewalski’s horse. Namely a stallion-led harem as the main reproductive unit, plus bachelor herds of unattached stallions. The zebras in the harem do all the things that the YouTube video says they don’t – care about each other, stick together when they run away from predators, run in single file, etc. Ignore Grevy’s zebras (Equus grevyi) with their weird social system

You quote Diamond, in a video. But he did discuss your further question in a book ("Guns, Germs and Steel"), I don't know if you saw it or what the video covers. In the book, he examines the natural resources available in prehistory on each continent (originating seeds/plants, animals suitable for human needs as food or labour, etc) and their usefulness for developing human society.

He observes that humans have throughout prehistory had immense knowledge of their natural resources and animals/plants not tamed and used domestically tended to have reasons for these when examined. He also notes that domestication isn't the same as taming - for example elephants can be tamed but have not yet been domesticated despite their usefulness.

He then identifies the qualities (mostly commonsense but some surprising) needed to make an animal suitable for domestication as observed from domestication worldwide, such as hierarchical structures (humans able to take over a hierarchy in that species), social and/or harem structures (the social structure needs to enable keeping both males and females domestically as needed, some species' social structures make this very difficult), mating requirements (some animals need aggressive fighting or large spaces for mating "runs" which don't lend themselves to domestication), and so on. I'd have to look it up but zebras were an example he cited of a species that seems like it would be useful but on closer inspection doesn't meet the criteria that allowed domestication. If it had been possible (within early human competence) it would probably have happened.

Exact reasons he gives in summary (looked it up now)

Domesticable animals need to meet many criteria ("to avoid many causes of failure"); failure on one or two can be enough to prevent their domestication. Domestication involves transforming a species (usually into a similar but different species) so it will be more suited to human needs. These changes include changes to size, hair/fur/wool, milk yield, etc.

Domestication failure was not due to society deficiencies (when horses and cattle were available they were rapidly adopted, yet not one tribe of all those in the zebra's range within Africa domesticated the zebra). Similarly many more species are routinely kept as pets, but zebras were never a common pet either. Mitochondrial DNA shows that those species that were domesticated, were often repeatedly domesticated - they were found suitable by multiple societies and tribes over many times and places, suggesting that universal shunning of a species was not an accident.

General reasons for failure - diet (finicky? Biomass efficiency?); growth rate (domestication tends to require reasonably rapid growth and maturity to make it worthwhile, it's easier to tame than gradually domesticate a long-lived species or one that will take undue effort to keep/feed/protect until maturity); captive breeding; temperament; panic tendency (some deer will batter themselves to death to try and escape, if panicked); social structure.

Zebras specifically - become more dangerous as they age;more uniformly bad disposition (you can't find a breeding line that lacks this, unlike our understanding of ancestral horses it's not really "some but not others" nor does it seem a trait that can gradually be developed in any usual domestication time period); bite and don't let go (injure more zoo keepers than tigers do); virtually impossible to lasso as they can avoid a rope (even by rodeo champions) ..... and from other sources it seems they also tend to panic under stress too.

The answer is yes, but humanity declined. And the opportunity passed. (Or did it?)

Most zebra species are unsuited for domestication as for example Jared Diamond noted. However, one variety of zebra, the Quagga (Equus quagga quagga), had all the trappings required for domestication. It was more tame and easier to train. It was used on a small scale as draft animal but it never really took off.

During the 1830s, quaggas were used as harness animals for carriages in London, the males probably being gelded to mitigate their volatile nature. Local farmers used them as guards for their livestock, as they were likely to attack intruders

The wild population was treated as vermin and eventually the whole species became extinct around 1880.

Only after the Quagga was exterminated it became recognized as a separate species, so either its likeness to less tameable varieties or its lesser carrying capabilities when compared to horses prevented successful domestication. That or the easy to hunt meat and hide and the removal as forage competitor for livestock won out.
Anyway not much later motorized transportation entered the picture ending any economic need for zebra domestication.

There is an initiative to breed back the Quagga which is generating some success. Maybe some time in the future there will be a second opportunity. 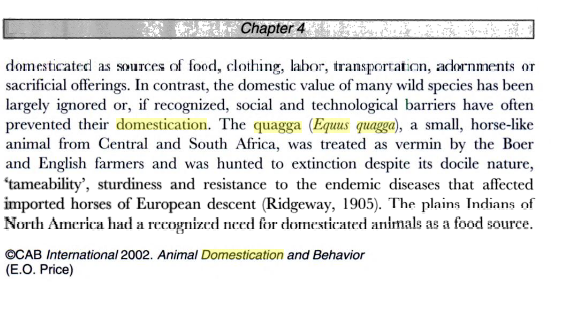 Yes indeed, when humans first domesticated animals they tend to act like... wild animals. However it's possible through breeding to create a captive population that aren't so wild. This is the earliest stage of domestication; stopping them from running you over or biting you when you try and look after them.

Horses, sheep, bovines, pigs, llamas, goats and camels are all to some degree capable of this; when raised in captivity they are more passive and docile than their wild counterparts. Zebras are not like this, even a captively bred zebra will bite you.

Another problem with zebras is that they're useless. A zebra isn't strong, so it can't pull a plough. It has a frail back which makes mounting it worthless. The only thing one could really do with a zebra is eat it, which is perfectly easy to do via hunting, so keeping them is pointless. Sure you could breed for stronger and stronger animals, but that takes time, and people working over many generations to get it done. At the time when we could have started domesticating zebras there was simply no point to doing that. It's possible that you could do it in the modern world; the process of selective breeding is far better understood and more streamlined, but you're still looking at several hundred years worth of work.

All these answers are really good and have great sources to back them up! I don't have this kind of information to add to the conversation, but I was at an exotic zoo a few weeks ago. When we went to go feed the zebras I asked this very question.

This said, they are a herd mentality kind of animal. I'm sure almost anything can be domesticated, but Zebras would probably take a lot more effort.

I think that the impossibility of taming or training zebras might sometimes be exaggerated.

Or interesting blog record from Rory Young, professional safari guide, ranger, tracker and writer, with 23 years years in wildlife and forest management - Can Zebras Be Domesticated and Trained?

The statement that Zebras are impossible to domesticate because they bite reminds me that when I was a child I was bitten on a finger by a horse. So how much more like to bite are zebras than domesticated horses?

I think that zebras could have been domesticated thousands of years ago if someone had figured out the right method.