A mammalian equivalent of a pufferfish?

The Inflatable Hedgehog or Zamba Zaraa is a creature, reported from the Gobi Desert of Mongolia. It is described as looking something like a hedgehog. When threatened, the animal strikes its tail against the ground (an alarm action that is used by many different types of animal) and then proceeds to inflate itself considerably. Reports differ on how big it is after inflation and range up to the size of a yurt (a small Mongolian tent-like dwelling).

There are other creatures who inflate themselves as a defense mechanism, most notably puffer fish.

Question- Could a mammal like a hedgehog or something similar evolved a defence mechanism like that of a pufferfish? If so what would it require to achieve this?

Armadillos can inflate themselves by swallowing air and bloating up the intestines. I have to think this takes some time. http://www.rainforest-alliance.org/species/armadillo They famously do it to be more buoyant when swimming. Armadillos can also wedge themselves immovably in tunnels and I would not be surprised if the inflation helps with that too. 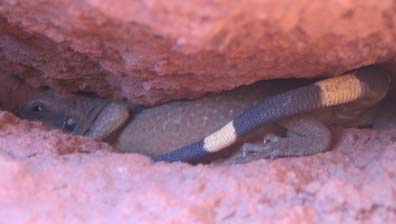 Toads (also frogs, I think) inflate themselves to make themselves harder to swallow. Also to avoid sex if not in the mood. http://www.treehugger.com/natural-sciences/female-frogs-inflate-to-deter-amorous-males.html

I am not sure what mechanism these use - probably also swallowing air.

Rather than swallowing gulps of air, if an animal were rigged so it could close its mouth and nostrils, it could use its respiratory muscles to exhale and force air down into its stomach and intestines. That would allow rapid inflation. The animal would still not look like a puffer fish; it would look like me.

Very interestingly, especially in light of above hedgehog discussion, when I googled "subcutaneous emphysema" I got a bunch of hedgehog pictures. ??

It turns out there is something called Hedgehog Balloon syndrome in which damage to the lung allows air to fill spaces beneath the skin, puffing it out just like a puffer fish. An out of control, sick, wounded pufferfish. 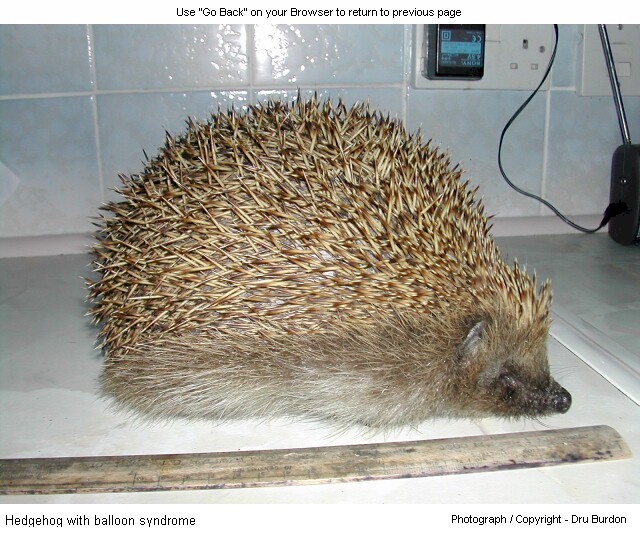 Subcutaneous emphysema can happen to humans too and it is always the result of a wound: abnormal connection between subcutaneous skin and lungs. If these hedgehogs had a such a communication like a sphincter that they could relax and open, they could inflate themselves with a valsalva maneuver by increasing pressure in the chest but not allowing air to escape the nose/mouth. Inhaling against a closed glottis would create negative pressure in the chest and suck all that air back in.

A hedgehog could have an outer covering, like a sock. When it raises the spines it will inflate the outer covering and indeed seem to grow larger.

The spines could evolve to fray into tufts at the end, being more like feathers. These would form overlapping plates like feathers on a dinosaur, or could form a felt-like mesh. Either way, it seems like something the modified hair structure should be capable of, with minimal changes.

If not grown, it could be a covering of leaves that the animal decorates itself with for camouflage. Appearing to grow would happen naturally and then it further evolves details and behavior to improve this effect's appearance.

I'm unaware of any examples of mammalian inflation.

The spines of animals like hedgehogs, porcupines, and echidnas are all made from modified hair follicles. These modified hair follicles allow the orientation of the quills and spines to change from lying flat against the body to erect, pointing in every direction. This will allow the same animal to be perceived as much larger and spikier, similar to why pufferfish inflate.

Of course it's feasible.

Fantasy reference aside, I'm not aware of any real-life mammals that can do this.

If you wish for an evolutionary reason for one of your fantasy creatures to have this ability, I would go with the following reason:

It's normally small, usually swallowed whole by predators, and expands when it's inside.

This would allow it to choke the predator, and would crawl out once it was dead.

As for what it would require anatomically, I would recommend spines, and a separate set of 'lungs' present just below some stretchy skin. Separate 'lungs' are necessary so it can stay inflated while breathing normally.

While not a mammal example, the Puff Adder, is another example of an animal that expands, but not usually as a direct means of defense. An animal could develop this sort of defense, but would have to have some way to quickly inflate itself. This seems to be the biggest hurdle that the animal would face. Also, keeping said air in, while still regulating breathing would be a challenge. Although for the animal, it would be akin to holding your nose while still breathing through your mouth.

So it definitely seems plausible, but would require an advanced breathing system, which would only develop under the right conditions. Are there predators within your lore that could explain why this animal would develop this type of defense? Other animals or habitat conditions might need to be thought out to support this type of evolution.

Not the answer you're looking for? Browse other questions tagged biology creature-design evolution or ask your own question.