Flogging and punitive mutilation in a zero-G environment

A zero-G ship carrying several hundred civilians is sent out by a dictator to colonize another star system. The dictator relies on corporal punishment including but not limited to caning, flogging and mutilation (amputation of hands or legs, gouging of the eyes, etc...) to keep order within the population of the country. He wishes for the same methods to be used on the spaceship.

How should torturers and executioners tasked with

carry out the respective sentences? What factors must they take into account? What machines or tools would be suitable for the completion of those procedures in a zero-g environment?

If too broad, I will break this question into several parts.

These procedures would take place in the Chamber of Gentle Correction, a large, airy, open room with clean white walls and a very powerful ventilation system. Before the procedure begins, the atmospheric pressure would be reduced - not to a vacuum, just lower pressure. This allows inconvenient fluids to vapourise more easily, and the ventilation system can quickly change out the air to keep it clean.

The criminal is secured by arms and legs with tight straps that hold the body steady. The Granter of Justice is secured with clamps to hold their feet steady on the deck. Lower air pressure reduces air resistance, allowing the scourge to move even faster than on planet.

amputation of hands, arms or legs or eye gouging (WITHOUT Anaesthesia)

The vile sinner will be clamped to a surface by restraints on various body parts. Before the gentle removal of offending limbs, the restraints can be tightened to form a tourniquet, cutting off blood flow and reducing the uncontrolled release of fluid. In addition to the normal ventilation system, the surgeon's assistant would be on hand to provide extra suction when required.

As with the amputations and mutilations, but because the committer of mischief is expected to be released from this vale of tears by the end, they just get an O2 mask and the atmosphere in the Chamber is reduced to vacuum, so they can enjoy the gentle sensation of their eyeballs boiling before they succumb to gentle treatment. The Pain Technicians would have full pressure suits, of course.

Thought of using straps? They're good at holding victims down (or up, depending on your viewpoint), even in positive G environments.

Use extractor fans to get rid of any blood/effluent/gunk.

But then again, throwing people out of an airlock might also be too simple...

Anything which injured or killed the crew would need to be avoided. People are a very limited resource; rather depending on journey time. If the journey is only a few days then you might as well postpone all punishment until arrival. If it's a multi-year or even generational ship then harming the crew is really not going to work. You need their labor and they will need to breed on arrival.

I would prefer the use of electricity. It is presumably abundant on the ship and does not permanently impair the victim so they can still work.

You should also consider how feasible it is to use coercion on the inhabitants of a spaceship. One disaffected person could puncture the ship's hull and let all the air out. Anyone who has been punished probably needs to be confined for the duration of the voyage to prevent them from getting suicidal revenge.

The same way they do with all other work in space

During the american Gemini program, a stepping-stone on the way to fulfilling Kennedy's promise of putting a man on the Moon before the end of the 1960's, one of the problems that had to be solved was that of how to perform an EVA: extra vehicular activity and perform actual work in a weightless environment. And the first attempt at that nearly ended really badly. Eugene Cernan got so utterly exhausted by trying to work in zero g that for a moment, Thomas Stafford thought Cernan might not get back into the spacecraft again. Luckily things worked out.

NASA solved this by working out methods on how to do work in weightlessness, and by instituting training for it. 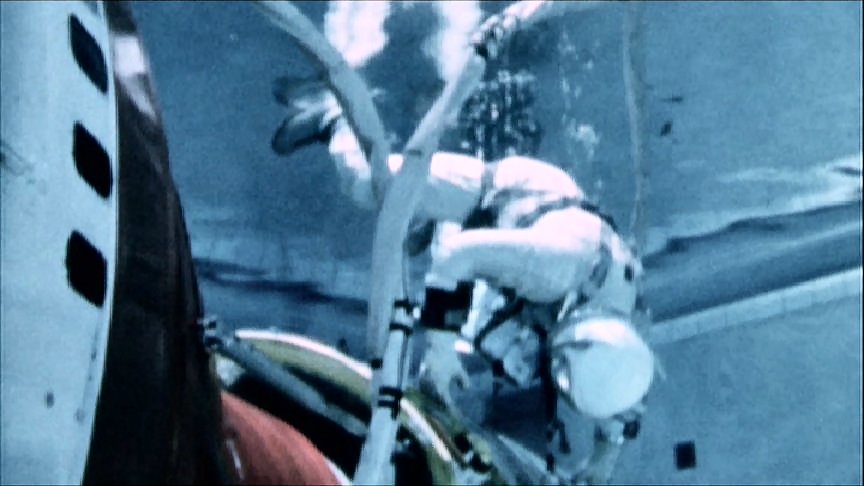 Later on, when the concept of space stations came about, it was quickly realized that fluids present a bit of a hassle. And again: they solved the problem. The obvious solution to making sure fluids do not float about in your weightless environment is to make sure they do not get out in the first place. And when fluids are unavoidably expected to come out, you contain them, simply by encasing your work place in a fluid-proof "bubble" and/or make sure you have nothing that reacts badly to fluids in that space.

Administrating corporal punishment would be no different in that regard: it is a work task that is expected to be performed, so people would get trained in how to do it.

Hence: allow the one that is administrating the punishment something to anchor themselves to the spacecraft.

Also: preferably you want to do this in a splash-proofed room. Then it does not matter if there is the occasional blood-splatter, or the involuntary evacuation of bowels, bladder or belly. Diapers may be used to lessen the mess.

This too might get messy, so do it in a room where you can be messy without anything getting damaged. Tourniquets can be used to stem blood flow; suction pumps can be used to catch errant fluid; washable walls and having nothing all too sensitive to fluids in the room will solve the issue.

Punishments that permanently disable or main (or kill) will reduce the effective survivability of the whole group. They would be the very last choice for a Dictator wanting to insure a successful mission.

Speaking with my mad dictator hat on, I'd ensure a very low requirement for such measures by simply using the right psychological selection methods for candidates in the first place. I'd pick well motivated and loyal people with my own outlook. They'd be "trained" more before the mission (i.e. really brain-washed). You'd send fanatics who needed no discipline.

So probably you'd limit punishment to the "pain-booth" type. Perhaps flogging, although this risks permanent injury. Maybe electric shock as a punishment would be better suited to the mission goals.

Psychological monitoring and perhaps psychological methods as torture would be an option. You'd be amazed (well, alarmed) by what a week in total isolation and/or the dark can do to a human.

Zero-G is, I think, an unrealistic restriction.

In practical terms any long journey in space will need to provide some emulation of gravitation forces simply to maintain body functions. It seems unlikely from current knowledge that the human body could be maintained in a healthy state for a long journey at zero G.

As your goal is colonization they would also need to be adapted to a real gravitational force before being able to carry out the mission. That requires some functionality in your ship to help maintain a "gravity-matched" body.

Some sort of centrifuge-like device is therefore a likely thing to at least provide some place for exercise. It seems a likely place for medical procedures as well, so presumably that would encompass your more grisly choices of punishment if required.

Actually carrying out such procedures in zero-G really just amounts to the same task as Earth but with some system for gathering fluids. A table with a lot of carefully designed airflow and suction pumps might do the job.

That said, does this maniac dictator actually want a tidy job. Tortures are most effective when the people you want kept in line have to endure the misery to some extent. Being forced to watch and listen in a chamber where the bodily fluids from the victim float around and can come into contact with you (and perhaps body parts too) would strike me as a pretty gruesome way to send the message to the survivors. In this scenario, the execution just needs a suit to keep him/her self clear enough of debris and fluids to see what they're doing.

Not the answer you're looking for? Browse other questions tagged zero-gravity torture or ask your own question.

23
What would furniture be like in a zero-G home?
10
How would basketball change to accommodate zero-g
12
Zero - G fire visuals and Oxygen consumption
12
What could cause infertility between humans living in gravity and humans in space? How could that cause speciation?
14
How would I design a human body for zero gravity?
2
Climbing a ladder in zero g
2
A World Without Gravity and How it Would Work
3
How does variations between no gravity and normal gravity change every day life?