Rules for the Development and Spread of Urbanisation

I am creating a map for a story set in a pre-industrial world, and have made the basic physical geography. My main concern now is the development of culture, centred around urbanisation. There are some obvious commonalities between major cities historically; mostly that they are along a river or beside the coast, and are otherwise accessible to surrounding regions in order to become trade hubs.

I'm going to assume that cities develop like rivers; and the largest ones are fed by tributaries. People and water flow along the path of least resistance between physical boundaries, and so the size and influence of a city is dependent on its catchment area. I'm also going to assume that cities first developed and then spread from continental cradles of civilisation (like the fertile crescent), and that these cradles had specific qualities.

I'd like some geography and science to support (or refute) these notions. Is there any analysis (the more sources the better) which can be summarised/cited to explain where and why ancient cities first developed and spread, also how this development is relational?

Human needs are the very first thing you would look at when developing an urban area. The most basic of which are:

Next is, and this is a large consideration--Trade, and other cities.

Lately I've been studying Medieval cities, in particular a book called Life in A Medieval City One of the interesting points made about the development and size of cities was very much connected to government and, above all, taxes.

Some of the largest Italian cities became successful because they were on a trade route, had access to the sea, resources, and encouraged commerce. There were French cities that became successful because of yearly festivals (and stringent guidelines for goods along with special merchant courts for those who didn't follow the rules) Troyes Hot Fair is a good example of this. They basically taxed themselves out of success, and eventually the guilds created monopolies.

Geography and resources are just the beginning. Wealth and trade can take a city up or down. Banking in Florentine made it a resource for everyone trading throughout Europe. This model was copied somewhat by other cities in Italy (Genoa) and others fell from prominence (Pisa).

I was going to link you to http://www.ancient.eu/ for more on ancient city formation, but I see that Landon Boyd already had. The map in inappropriateCode's answer illustrates a point I was going to make: the most ancient cities, with the most staying power tended to have access to the sea. Not all of them certainly, but many.

As for tracking the spread, people do what's best for the times. Geography is just one part of the picture, as are resources. Cities are abandoned for a number of reasons: natural disasters, government fiats, a particular industry moving away. Part of the reason for the decline of Troynes and many other cities was an economic depression throughout Europe, and it's the kind of thing you see, even today.

Cities are more likely to be wholly abandoned if they aren't geographically close enough to a "main drag" and if gathering resources in the area becomes more arduous. No one really knows what happened to the Maya, but many scholars point to a reliance on rainwater and bad agricultural practices, which lead to a reduction in food and water, both of which are needed to survive.

How a city grows, fails or thrives is dependent on stability of resources, whatever they may be.

Basic survival knowledge is that when lost, follow streams or rivers downstream, or try to find a coast. Settlements/civilization are/is historically and still typically near water sources, and in low lying areas. Going up hill is not recommended in survival situations as it tends to bring one away from civilization. Just google what to do when lost.

[edit for additional clarity] The rules that guided settlements historically hold true in more modern eras. Proximity to travel and trade, food and resources (in the past, water provided all of these). In the pre industrial world, as you said your story was set, travel (and especially trade )was easiest via water so I would expect that large successful urban centers will still be on water, with likely sprawl occurring along the coasts or river fronts. Especially filling in upstream at minor tributaries, and along the coast at any delta.

Sometimes settlements occur in more remote areas around military forts or outposts as well, in areas chosen for their defensibility.

I think that history can do more to validate your assumptions than "hard science". Let's look at a map of Venice and her territories in the pre-industrial world. 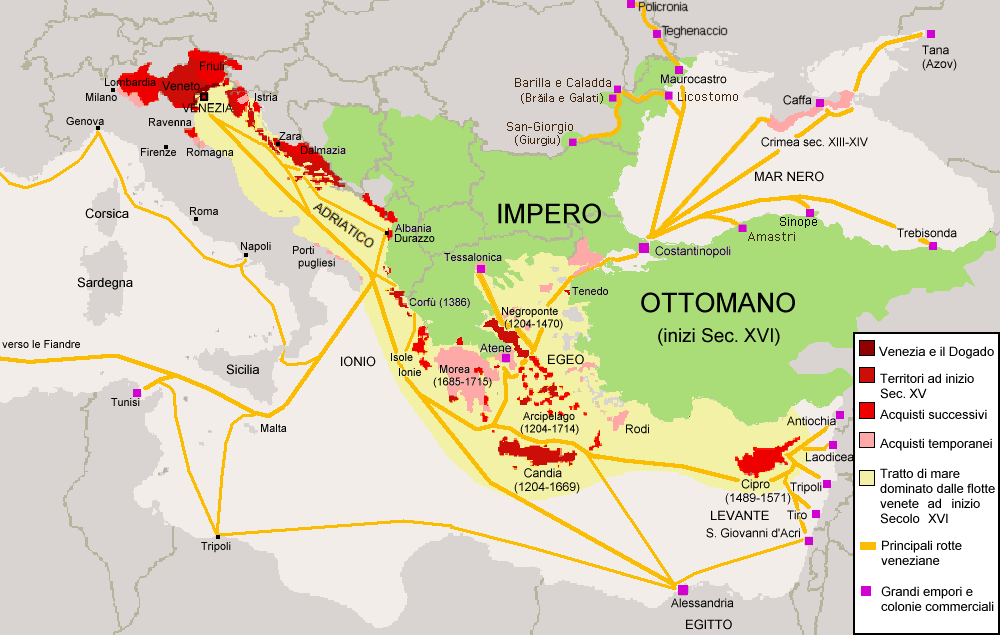 This map (albeit, not ancient, I'll get there in a second) highlights the conditions and effects of the spread of urbanization in your question. The geography of Venice was perfect for trade on the high seas (which was a "thing" at the time). Plus, per your question, development of culture wasn't a problem in Venice, as some consider it the birthplace of the Renaissance. It was fed by tributary cities which were not as gifted in excellent geography, providing the "pecking order" you describe.

Now, Europe has never been described as the cradle of civilization, but I think it plays a part in answering your question.

"I'm also going to assume that cities first developed and then spread from continental cradles of civilisation (like the fertile crescent), and that these cradles had specific qualities."

Let's assume the civilization here on earth started in the fertile crescent. http://www.ancient.eu/Fertile_Crescent/

From there, tributary cities were planted further and further north until they came to Greece. By then, culture was advanced enough to support the city-state, enter Athens, Sparta, and, of course, the 300. A tributary city was planted in Italy, and from there, Venice was founded. The chain continues until today.

The notions in your question are definitely valid, and they thankfully don't require MathJax format to answer. History here on earth shows that cities do develop like rivers, because who wants to expend extra effort to get over mountains, across desserts, or over oceans? The answer to why ancient cities spread is simple; wealth, and it leads me to one more side effect to this mode of urbanization.

Large cities are going to plant small cities to gain wealth. We saw it in the cities here on earth. If there is a deposit of gold 30 miles away, I see that as a fitting occasion to start a tributary city. That way, others can do our work for us, but we get the gold. When it comes down to it, urbanization is all about the money.

I have tried to research this myself, and found some information which is relevant, but by no means comprehensive enough.

The most obvious point is that, when speaking of the cultures which emerged around the Mediterranean, urbanisation first occurred in the fertile crescent, then spread to Egypt, and then to Greece. The exact reasons for this are not clear; whether due to overpopulation or resource depletion. Urbanisation took different forms across the ancient world, with the highest density in Mesopotamia. Egyptian cities were different, spread more thinly and more specialised in function (temple or palace cities).

Cities were first created within warm climates and the places with the largest and most fertile river valleys. With time and technology cities were established in progressively colder climates. Below is a map produced by Dr. Meredith Reba, from her research into the origins of documented urbanisation. It's worth noting that although some very old cities left documented evidence in Mesoamerica, India, and China, their spread was far less prolific than around the fertile crescent.

Vanishingly few ancient cities were established in sub Saharan Africa, Indonesia, or South America, even though these regions were inhabited by humans for well over ten thousand years. The obvious thing to note from this is that jungles are not the easiest place to create a city, and comparatively dry regions made excellent sites for construction projects. It's also worth noting that humanity found it much easier to spread across cold areas than wet ones; likely owing to rainforests having simply too much rain and too many huge tree species for ancient humans to tackle.

7
Going for a island focused setting and I want to make sure the geography makes sense
2
The growth and development of the fox's nine tails?
3
How realistic is the placement of the cities and borders on my map?
7
How to hinder the development of sea travel until the industrial age?
4
Considerations on settlements and urban development on a colonized exoplanet
3
Need a North American location with a large city and whitewater river for post-apocalyptic fiction