How to hinder the development of sea travel until the industrial age?

Instead of Earth as we know it, humans evolved on a slightly smaller, habitable earthlike planet with different geography. Due to the plot reasons, I would like to keep them confined to one (large) continent with no seafaring until they achieve late-19th century tech level, delaying the age of discovery (this world contains other significant lands, but they should not be discovered by mankind too early).

But how can I achieve this? I was thinking mostly about the geographical reasons so far, and came up with following:

Is it believable, that such conditions may prevent humans from becoming sailors and expanding to other continents? What else can I do?

Your planet has a very effective species similar to Teredo. They destroy any wooden hulls in a few days or weeks. You can adjust the description of the species to prevent ocean travel but not river/lake travel by making it a saltwater species. 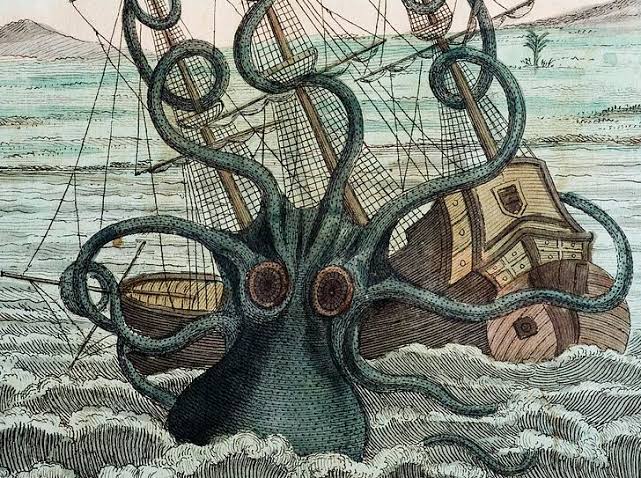 I believe this is self explanatory.

To add some variety, look at the Carta Marina, a map of the nordic lands from 1519. It contains a plethora of other sea monsters, such as these: 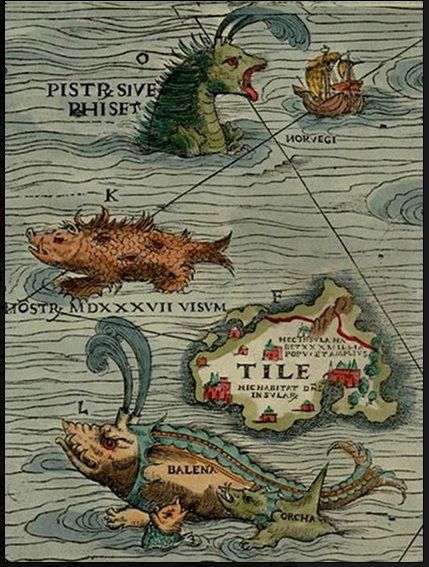 Because medieval waters were to sailors what current day Australia is to land dwellers.

There are no trees suitable for shipbuilding

Wood was pretty much the only game in town for seafaring until metal ships became practical. Without proper wood, there would be no sea travel until about the industrial age.

This of course can cause problems in other areas where wood was crucial, but for most things there are suitable alternatives: buildings would be mostly earthen/stone/thatch, abundant coal could provide easy fuel, etc.

I do not think you can prevent boat use on rivers and lakes. People will see broken trees floating on them, then tie them into rafts, then start shaping them.

Also based on Iceland, minimize or eliminate tall trees. Just have plains, marshes, moorland. No trees = no big boats. They can still make rafts from bundles of grass, but they fall apart in rough seas.

Make other continents small and locate them far from main continent. And have winds and currents that make it hard to reach them. So reaching other lands in sail ships is very hard, and finding them is harder, and getting back is nearly impossible. Since nobody ever returned with news of other lands, people just assume that there is nothing to explore.

Also make travel within the main continent easier. RL exploration started as an easier way to get to India (which was known, but hard to reach by land). SO: Lots of long wide rivers, few mountain ranges or deserts. You could also have internal seas or lakes, but that encourages big boats.

on a planet with a large nearby moon, tidal forces would be immense.

in such a situation, or perhaps a climate heating scenario inducing similar instability, hurricanes would be frequent, even constant, rendering coastal living unsustainable. as a result, the populace lives inland, away from the worst of the storms.

in such an environment, reliable sea-travel might have to be submarine, which would require a great deal of industrial/technical development before being developed.

seamanship could still be developed in inland lakes. a continent without water-shed in the form of rivers & lakes makes no sense.

There are two challenges posed by your question.

The first relates to early human migration. Of course, we know that the European "age of discovery" involved very little discovery and that actually most places "discovered" by Europeans between the 15th to 19th centuries were already inhabited by homo sap communities. Therefore, you need to think about what stopped humans from spreading out across your world in its prehistory. Isolation of your inhabited continent won't do it: Polynesians and Melanesians used small outrigger canoes to settle islands thousands of kilometres apart, thousands of years ago.

Rather than looking for environmental or geographic reasons to impede seafaring, why don't you establish a culture that is, for some reason, historically averse to travelling over water, or exploration, and then an event in recent history which changes that?

The second challenge relates to the implications for industrialisation if you remove seafaring. I am referring here to to mercantile capitalism and the global networks of exchange that emerged as European powers started to develop technologies such as square-rigging and establish themselves overseas; seizing new natural resources, exploiting new labour forces, creating new markets, etc.

The fundamental problem is whether the industrial revolution would even have been possible without this prior stage, and I would argue that it would not have.

Look at China, the empire of a thousand year dynasties that has more often than not been ahead of the pack throughout history. The Haijin policy of maritime isolationism following Admiral Zheng He's expedition to Africa in the Ming Dynasty inhibited China's participation in mercantile capitalism - and therefore the institutional (in terms of property rights, etc) and technological developments that laid the foundations for industrial revolution. Result is that China has only recently "caught up" with the countries that had their industrial revolutions earlier.

Think also of cotton, the driver of the industrial revolution across Europe. Cotton's story is inherently one of mercantile, globe-straddling war capitalism: labour ripped from West and Central Africa, transported across the ocean to the Americas to work as slaves growing high-quality cotton on fertile grounds seized by Europeans from native populations, all in order to undercut Indian growers, spinners and weavers and ensure the domination of merchants in London and Antwerp, and mills in Liverpool and Alsace-Lorraine.

The golden age of cotton was borne of seafaring, a triangular trade: finished cotton goods from English mills to African traders for slaves, slaves sold to the Americas where ships loaded raw cotton that was then transported to European centres of cotton production. Without seafaring, would the mechanised mills that powered the industrial revolution have come to pass?

I think this is a harder challenge to meet. To create a realistic, early-industrial world absent seafaring will require you to generate a material, political and technological history that meets the conditions of Earth's mercantile period but unfolds across one continent only.

Not the answer you're looking for? Browse other questions tagged reality-check technological-development geography civilization sea-exploration .

10
How would humans have developed without fossil fuels?
6
Sea Travel Variables
8
How would a 21st century army supply an invasion of a floating continent?
16
How can a sapient species build an advanced civilization, while remaining on one continent?
0
Naturally altering the climate in order to create lush areas in a wasteland - Is it plausible, and if so how?
4
World with two directly opposed habitable continents, one hot one cold, with significant geographical barrier between them
5
What would replace/be the next evolution of tanks in the future
5
How to justify small Hominids not being conquered by (anatomically modern) Humans?