Can electric eels power my phone?

I'm going on vacation, and browsing through my texts on the latest iPhone. Uh oh, my private airplane, which for some stupid reason has no tracking devices, crashes onto some undiscovered island. Everyone but me dies. Somehow I manage to save my latest iPhone and charger. Ignoring that there probably wouldn't be service, I want to use my phone to contact someone.

I'm on a tropical island, a few miles long and a few miles wide. There is a mountain type landform in the center, with some creeks coming off it. One of them has electric eels in it. There are also coconut trees, and probably a few banana trees.

(If something is unrealistic about the situation, tell me, and I'll change it.)

From the wreckage of the plane, and a tropical island in the pacific, can I make a device that charges my phone using electric eels?

Note - If you were considering closing this as the actions of a single person, it could be a society who worship the deities of Siri from the magical glowing device, and are trying to come up with a way to charge the device. Siri has many personalities, and only few speak the natives' language.

Eel Power
According to Wikipedia, electric eels (which aren't actually eels) produce 100-860 V at 1 A for about 2 ms, so between 0.2 and 1.72 J of energy. This is for burst damage mode. The article says they can perform these bursts intermittently for up to an hour, but doesn't say how often, so it's hard to get total energy produced. In fact, I can't find any source off-hand that gives me this value. Either way, it's probably not a huge amount of energy total.

They can also use a couple different organs for electrolocation. In this mode, they output around 10 V at 25 Hz, up to several hundred Hz. Unfortunately, Wikipedia doesn't give amperage, so we can't calculate power or energy. My guess is it's a lot less than 1 A.

From this random Reddit question, a cell phone holds about 18 kJ of energy when fully charged. This random Android forum thread says a typical phone lasts 5-10 hours, or 300-600 minutes, while actually using it. So 60-30 J per minute. Let's assume you need about 1 minute to relay critical information to the 911 (999/whatever) operator. Let's also assume the latest iPhone is a bit more efficient than the Androids in the above thread (from 2012), and is setup for low-power mode, and further assume that lets it run for 15 J per minute.

Our first assumption might be to use the 1.72 J eel shock times 9 to get 15.5 J and charge the phone. But that's at 860 V, which is far higher than your wall charger is intended to use. If you find a small eel (around 10 cm says some Yahoo answer I found but can't re-find), the 100 V should be in the right approximate range, so you need 75 eels.

It shouldn't be hard to find some electrical wire you can use to transfer energy from the eel to the charger, but you have a couple problems. First, your wall charger is expecting an AC input, not DC. It's hypothetically possible to overcome this with applied science, but I'm not sure exactly how off-hand.

Second, you need to know which end of the eel is positive, and which is negative. With a proper converter (ideally, just replace the entire wall charger with a variable-input converter from 100-900 VDC input to 5 VDC output), it won't matter which end is positive, because the diodes will force the current to go the right way.

This random DC-DC converter takes an input of 30-800 V and outputs 24 V, so it's definitely possible. From there, you can find about 37.9 trillion types of 7-35 V input, 5 V output DC-DC regulators. Combine the two and you have an electric eel iPhone charger. I'm fairly confident you can find both of those devices on any reasonably large aircraft without even building it yourself.

Of course, the eel isn't going to cooperate, so you probably won't get the full charge each time, so you might use 200 eels or something just to be safe (even at full charge, 200 of the most powerful eels is only 116 J). If you can get them to repeatedly burst, you could use fewer total eels (just count each burst as one eel).

Shake it, Baby
At the end of the day, I'd think an entire airplane worth of salvage would make it a lot easier to do this: 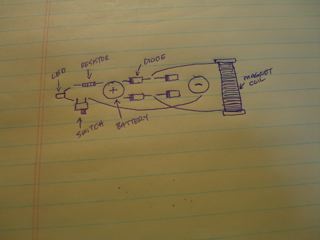 Shaking the finished assembly [note, this guy's "assembly" isn't identical to the instructable's instructions] gave me 7.4 volts. I tried recharging my phone and it gave 33% charge after rigorous shaking for 15 minutes.

It's 4 diodes, any random tube of about the right size, and some magnets. The hardest part is coiling all that wire around the tube. That sounds a lot nicer than trying to hack together an electric eel charger. (Of note, there's a bit of contention in the comments saying that specific design sucks and may not actually work, while others say it works fine. It's just the first one I Googled, but regardless, real designs aren't very complex, especially for a one-off phone call.)

The simple answer is no. Not unless you're an electrical engineer or similar with a lot of knowledge of the relevant technology. To charge the phone you need to supply power on the right lines at the right power levels and all sorts of other fiddly things. If you just wire an eel to the power socket the odds are you either get nothing or you fry your phone.

You'd be far better trying to salvage batteries or similar from the plane, at least those you already know where positive and negative terminals are and you are getting regular DC current.

Not the answer you're looking for? Browse other questions tagged science-based reality-check biology electricity or ask your own question.

6
What would be the immediate effects of no electric current?
66
Charging phone in medieval times
1
The Electric Dragon
9
Can a biological creature detect and absorb electricity from power sources?
17
Electric power system connecting the Earth and the Moon
5
Weapons for Bio-Electric creatures
9
Are handheld electric weapons realistic?
3
Could an electric discharge from a sac similar to the electric eel be useful on a land animal