The Tzzin are a race of reptilian humanoids that have some resemblance to electric eels. They are capable of generating and discharging electric charges through their hands.

With their Stone Age equivalent, it was enough to simply ambush a creature, jump on it, and discharge as close to the heart as they could. But now things are moving forward and some tribes have begun experimenting with metals and other resources to create better ways to store and discharge their electric charges.

If necessary, consider they have evolved some form to prevent themselves from beign eletrocuted.

Their society would now be the equivalent of the Greek City-State stage, but with a much better understanding of how electricity works.

The main question is: What kind of weapons (melee and ranged) they could have that makes use of their natural abilities? 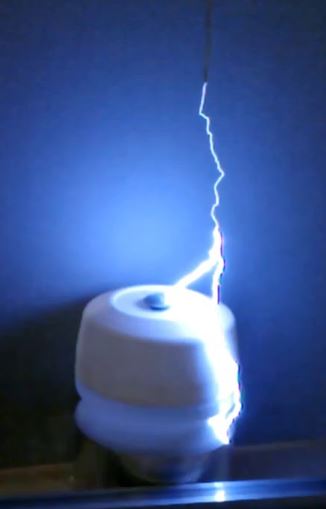 Leyden jars are primitive capacitors. They can be gradually loaded with charge generated by a static electricity wheel or other source. A Leyden jar can accumulate dangerously high voltages Benjamin Franklin famously knocked himself unconscious while trying to use a Leyden Jar to electrocute a turkey to death.

A Leyden Jar pack would be perfect for your creatures. They would charge their jar pack using their own electricity, accumulating in the jar a voltage far in excess of what they can generate and store with their unaugmented god given equipment. Then they can attack in the manner they are accustomed with a shock, but rather than the maximum charge they can store in their own bodies they deliver an enormous accumulated charge from the pack.

This would be effective and cool. Also very satisfying for the electrical creatures.

The only thing that comes to my mind is the Tazer-Bow, firing wired arrows that shock the target when the archer touches the end extremities of the wires.

This is so weird :( sorry but I couldn't imagine any weapon that could be activated with the only little energy generated by a single Tzzin.
Maybe if they could sum up the energy from multiple Tzzins to power a single bigger weapon... that would open up some serious siege gear scenarios, however, i'm not sure this is really possible.

Some primitive molotovs. They can use the electricity from their hands to start a fire on a piece of cloth covered in oil, attached to a vessel with more oil or alcohol.

This power is equivalent to connecting a tazer to a weapon through a bare wire. So before you go this way, you can just ask yourself: what would happen if you tazed a sword that you are holding?

Possibles to think about:

Conductive Whip. A whiplike stunner that not only hurts, it also conducts the sophont's electric charge to the target. Two kinds of attacks in one strike.

Batteries not Included. Certain weapons rely on the host's charge to fire them. Thus some(?) weapons are lighter and cheaper since the host is the power source. And enemies can't use your weapon, because it has no integral power.

Not the answer you're looking for? Browse other questions tagged science-based biology weapons electricity ancient-history or ask your own question.

43
How do I explain a unicorn discharging powerful electricity at a distance?

4
Can electric eels power my phone?
5
Realistically calculating the movements of someone with super strength
1
Can a weapon choose its worthy wielder without magic?
16
How small can humans be before weird stuff starts to happen?
8
Killer Swarm Bio-weapons?
9
Are handheld electric weapons realistic?
6
Giant Sentient Spiders Tribal Warfare
12
Alternatives to batteries for “residential” power?
4
Creating fog over the ocean and large island using electricity and..?