What technologies could allow for individual scale invisibility and what are their caveats?

In a science-based futuristic world, individuals (soldiers) are able to become invisible to the human eye while keeping a decent amount of agility. What could be the different possible technologies behind such ability and what would be their downfalls?

For example, I'm thinking solutions could be:

No solution is too crazy as long as it is scientifically sound.

Again, I'm trying to fool humans only, not cameras, dogs, sensors and whatnot.

This can be used to design cloaking materials [4]. The picture below shows a normal object on the Left. It changes the pattern representing the electrical component of the light. Thus it is visible. On the Right, we see an object using metamaterial cloaking. The magnetic component of light is used to prevent interaction with the electrical one. The object does not disturb the electrical pattern. Thus it is invisible.

Picture and description from Wikipedia: "Left: The cross-section of a PEC cylinder subject to a plane wave (only the electric field component of the wave is shown). The field is scattered. Right: a circular cloak, designed using transformation optics methods, is used to cloak the cylinder. In this case, the field remains unchanged outside the cloak and the cylinder is invisible electromagnetically. Note that the special distortion pattern of the field inside the cloak." 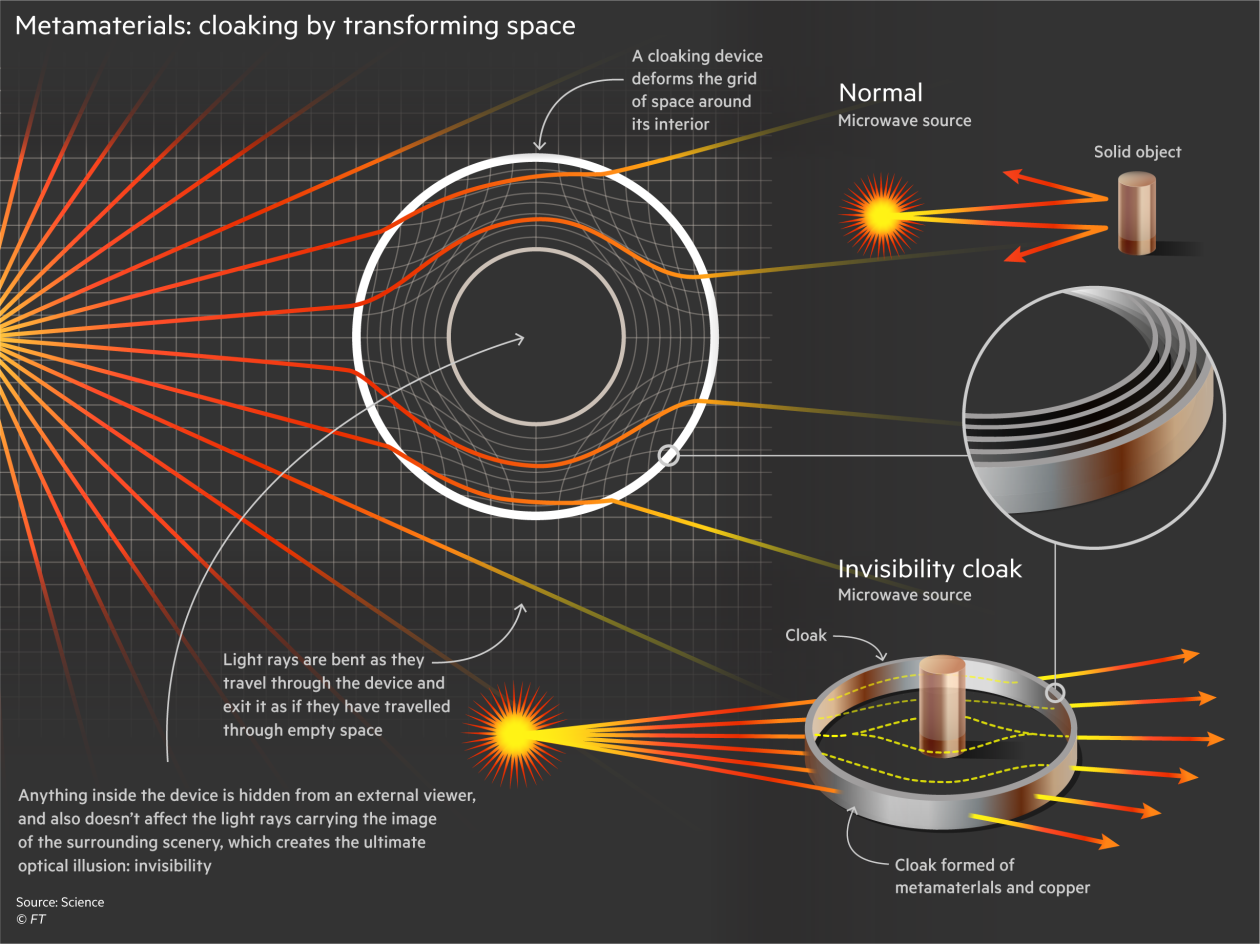 This graphic from this recent article [6] illustrates the phenomenon somewhat more graphically.

Now it is easier to manipulate lower wavelengths than higher ones. Radio, Microwave, and Infrared can be manipulated this way. Scientists are currently working successfully on Visible Spectrum cloaking and some very small object have already been cloaked this way. Ultraviolet seems plausible, but X-Ray and Gamma seem improbable, as the manipulation of their wavelengths would require molecular and atom scale structures respectively. Although those would make one hell of a nice radiation shield...

So how do we build you an invisibility cloak? That's easy enough. We put you under a flexible version of the Visible light metamaterial and for good measure, we equip the inside of your suit with a Thermal Infrared invisible metamaterial. Now you are invisible in the Visual and Thermal Infrared. Anyone using a Near Infrared or UV camera, seismic detection, echolocation, electric detection a Thermal Infrared laser and a billion other members of the cast of Utility Belt: The Movie could still detect you. But that's beyond the scope of your question, thus not my problem.

Be aware that this technology brings more than Harry Potters cloak. This video [7] is a good summary of its implications.

Douglas Adams describes an unique cloaking technology known as the SEP field in his novel Life, the Universe and Everything. This technology persuades the observer that the object under the field is Somebody Else's Problem and doesn't concern them, so they just ignore it.

The Hitchhiker series is of course not hard Science Fiction but rather a parody thereof, but this particular concept isn't actually that strange. When we extrapolate hard sciences like Physics or Biology, then why not also extrapolate soft sciences like Psychology?

A technology which manipulates people psychologically to ignore and forget the subject might not actually be that implausible. It could employ some kind of hypnosis or other neuropsychological effect.

Possible drawbacks could be:

I cannot comment on the possible scientific approaches, but their downfalls would be all the same: individual invisibility is great for spying, criminal activity and maybe small special operations teams.

Any scale of warfare needs a very detailed picture of where the friendlies are. You need to coordinate the troops. You need to evacuate the wounded. You need to make sure there is no friendly in the explosion radius or line of fire of your weapon. You do not want to miss on the morale boost that the feeling of "the man next to me" gives to the troops. In short, what you really don't want is an individual soldier, seemingly all alone, in danger of getting hit by the enemy as well as getting hit by any weapon his buddies may fire, fully aware that he cannot be evacuated and any wound will be his death. So what you need is a way to identify those invisible soldiers. And if that technology exist, it's only a matter of who wins the encryption race. Will the enemy be able to decrypt (or maybe just trace the signal to a specific point in 3D to fire on, that would be enough) the signal in real time and kill the invaders or not. Kind of the Enigma in WWII.

Fooling the viewer by for example somehow manipulating his brain can easily cicurmvented by technology available today. Cameras. If you cannot fool an optical recording device, things like night vision or modern day tank optics will already invalidate the whole concept, because it's short time recording and replay.

So what you need is a device that actually changes the rays of light and transmit a different image to any image processing device, technical or biological. The obvious countermeasure is to emply a different sense for detection. Guard dogs are not exactly the pinnacle of technology, but they work. Ok, lets assume with the invisibility kit came a "smell transmutor". We could still detect moving bodies by air pressure. And radar. And maybe Infrared or Ultraviolet. Or maybe ultrasonic sound. So this invisibility kit needs to be a full blown scientific wonder, or the technology to detect invisible people will be cheaper than the invisibility itself.

Assuming the invisibility is perfect in any way, it would still be vulnerable to things that normally obscure visibility or hinder our senses. Invisible people moving through smoke or rain will be visible by their surroundings. The rain not hitting spots, the smoke moving around columns of "nothingness". Any kind of muddy ground can make technology worth a few millions totally meaningless. Comic-style even in the case of muddy footprints. People will need to be very skilled and specially trained even if they have perfect technology.

And still, if the guy employing such a kit is absolutely not detectable, the world is in danger of failing. How do you prevent crimes with such technology available. For a believable world, you will need a way to control such technology. If this technology is widely available in wartime, what would the civilization look like in peacetime? With all the guys that know that nothing can stop them? Maybe the real drawback of the technology will be, that after war all the veterans able to use that technology will need to vanish without trace because society would fail if they were actually coming back alive.

17
What would be the next technological step for a civilization after it has depleted all resources that allow for conventional technologies?
9
What natural or artificial geographical structures that could allow a large-scale true "water going down the drain" whirlpool?
3
What are some technologies that could minimize the space it takes to support a space crew?
11
What non-metallic materials would allow making guns and bullets?
9
What would allow an epidemic on the scale of the Black Death to happen again?
5
What emerging technologies could put at risk the engine and the exhaust of a diesel submarine with the 10 years ahead technology?
3
What could allow large scale paradrops to be viable against opponents with good air defences in the near future?
15
Feasibility of cylindrical rasterization? (Alien GPUs)
2
What location options are available for a large-scale underground mining city