Why terraform at all?

We Earthlings like to live in gravity wells but also have a taste for the exotic and are a bit lazy. Why not make colonies that take advantage of local conditions?

Cloud cities over Venus, much less fun ones on Titan, an Atlantis under the ice on Europa, Domed potato farms on Mars etc.

It seems to me that making a series of earths would have dubious benefits and huge costs. Why change the spin of a planet when you can just genetically modify your crops etc.

So tell me why I am wrong. I will not fight you :)

For my answer, I take the term "Terraforming" as a generic term to create a passive closed-loop environmental system capable of sustaining human life. It's only external requirement is to supply the system with sufficient energy to drive the system. This includes massive Terraforming projects like making the surface of Mars habitable as well as creating passive closed-loop environments inside of asteroids or domed craters on various bodies (e.g. Mars and the Moon).

The following sections discuss these 3 reasons but not in the same logical grouping.

By definition, humans evolved to operate in a "shirtsleeve environment". Operating under conditions outside of this bound (too hot, too cold, too much gravity, not enough pressure, etc.), reduces the productivity of humans. In some cases, it also has adverse affect on human biology.

Terra-forming provides a technique to create a shirtsleeve environment in as large an area as possible. For planetary bodies, this ultimately would mean terraforming the entire body. Before that though, the colonists will Terra-form smaller sections (e.g. domed craters). 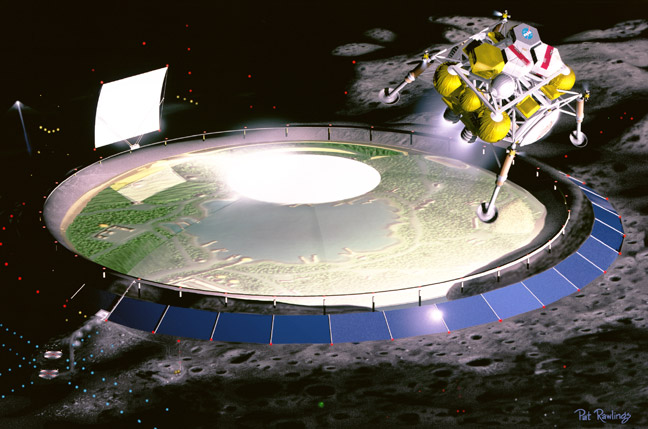 Closed-loop active
Closed-loop active environment systems (e.g. something you'd put on a spacecraft) require constant supervision, maintenance, and other human intervention. If the responsible people get hit by a bus or the machines break and the people can't repair them - then everyone dies.

Open-loop active
Even closed-loop active systems are large and massive. For trips of less than 1-2 years duration it makes more sense to just bring the supplies and forget all of that machinery and chances for problems.

The problem is you throw everything away after it is used. Which means everyone dies if you don't get regularly resupplied.

Closed-loop passive (aka Terraformed)
For very long-duration missions, especially ones in which it's possible the crew will forget how to maintain the environmental system, then you will want a closed-loop passive system.

Passive environmental systems function with or without human intervention. For long-term colonies or generation ships, some form of closed-loop system will be a requirement and making it passive will be the goal.

How much might it cost to redirect comets to strike Mars and increase its volatiles inventory? Hundreds of billions or trillions of dollars? Even the "richest" entity capable of running a project like this on Earth (the US Government) would find it difficult to finance such a goal. Give the time horizon mentioned below, it would be exceedingly difficult for other organizations to justify the risk.

The current cost combine with the risk would not be worth the distant reward. Even when you ask questions like "how much might a fully terraformed Mars be worth" are actually not important when the payout goes to the great x50 grandchildren of the person making the investment.

Terraforming even the most Earth-like planet (e.g. Mars) might take a thousand years or more. For even the most optimistic humans, this is well beyond our normal capacity to operate. We just don't think in terms of projects lasting that long.

Large corporations are arguably the best at long-term planning and execution and they aren't really capable of managing projects beyond a time-horizon of 10-20 years. By comparison, elected governments may plan for 10-20 year time frames by have problems with execution follow-through when elections replace the original planners.

After all the people reaping the rewards won't be born for more 50 generations. I suspect we won't see serious discussion of massive/costly Terraforming efforts until human life-expectancy gets to be close the length of time such an endeavor might take.

Passive environmental systems require much more "stuff" than the active ones. It won't make sense to use passive systems on anything intended to move around (e.g. most spacecraft) unless the mission requirements require it (e.g. a generation ship). Carrying the extra mass of the passive system would simply cost too much reaction mass to move.

Of course planets & moons will be likely targets for Terraforming. However, we might see Terraforming and development of passive systems for giant space habitats (e.g. O'Neill Cylinder habitats). 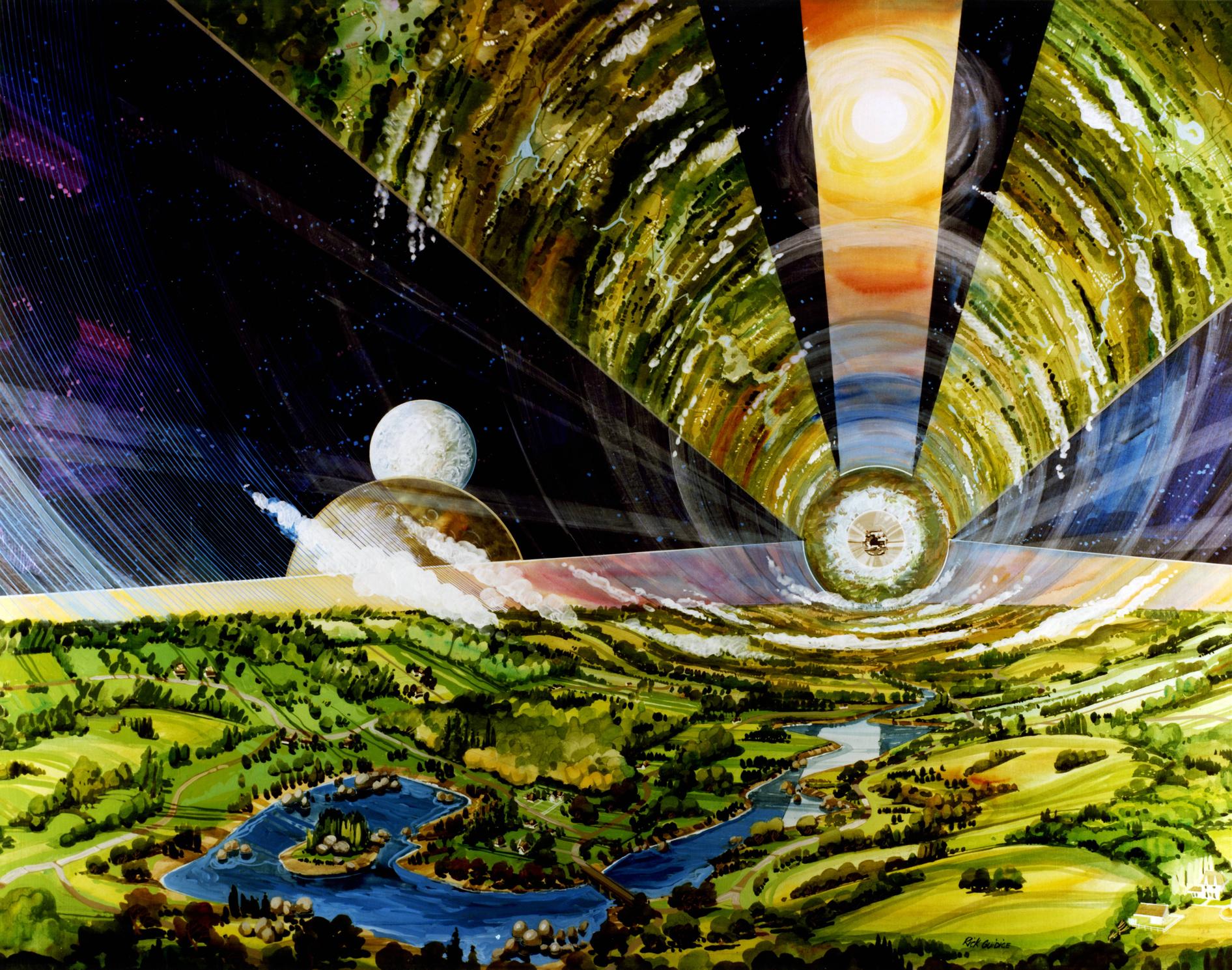 Humans naturally desire to live in safer and more secure environments. The prehistoric ruins of Jericho show that humans have built fortifications around their living spaces (cities) over 10000 years ago. It is not unthinkable that much older settlements with defences exist, but have been lost by the ravages of time due to them being made of less sturdy materials (such as wood or loose rocks).

It makes much more sense to consider terraforming as an ultimate extension of humanity's need for security. A terraformed planet has a stable biosphere, and cannot have its biosphere easily destroyed (short of targeted asteroid strikes), and even in such cases, terraforming technology may be able to reverse much of the damage from the resulting nuclear winter.

Furthermore, a terraformed planet also greatly reduces the need for further maintenance once the terraforming is complete. While a Venusian cloud city requires constant input of lifting gases and possibly replacements to its corroded external compartments, a terraformed Venus would not require as much maintenance, and would also be far more stable.

Therefore, humans would generally not start with terraforming planets due to their large capital outlay, but as more and more people begin to settle on the planet, humanity's natural need for security would drive them to terraform it.

People are going on about cost, but what is cost. A home is a home, it has no value that could be measured by mere cost. We talk of the richest organisation on Earth, but what do they control compared to a whole world? The cost is nothing compared to the reward.

Then there are the other costs

What is the cost of mining when you have to make the whole mine airtight or have every miner in a space suit?

What is the cost of popping over to visit a friend in the next city when it's 400C in the shade?

What is the cost of food when you can't farm?

How dare you condemn my children to living in a slowly decaying box when they should be dancing in the rain for the sake of short term costs.

“Finally, a planet is not a world. Planet? A ball of rock. World? A four-dimensional wonder. On a world there must be mysterious mountains. Let there be bottomless lakes peopled with antique monsters. Let there be strange footprints in high snowfields, green ruins in endless jungles, bells beneath the sea; echo valleys and cities of gold. This is the yeast in the planetary crust, without which the imagination of men will not rise.” - Strata, Terry Pratchett

p.s. Don't bother pretending you can change the mass/gravity of a planet. That's technology of another order.

On the long run, you want a self-sustaining ecosystem to live in. A place where people can live and work in shirtsleeves and survive if the computer network fails. And the best scale for that is an entire planet. Don't put all your eggs into one basket.

Edit in response to comments: You could gene-modify humans to live in various places, but that would limit the ability of humans to travel. The goal is a shirtsleeves environment for resident and visiting humans.

When you try to colonize a uninhabitable place, there are 2 options:

There are two questions when choosing the best approach:

The last one answers your question: our conscience tells us that option #1 feels right and #2 feels wrong. So it's just a "human thing" to do #1. (Nature does #2 and look how it ended.)

Have you ever red the Mars Trilogy by Kim Stanley Robinson? A lot of the questions over terraforming are addressed there. Most of these have already been raised in other questions, concerns like Security, Safety, Convenience, Stability, increase of space ETC, so I won't address these.

My point is that the Ethics of terraforming are simple if there is no native life. To parphrase a fantastic quote from (iirc) Blue Mars, Terraforming is not in any way an ethical concern. Mars doesn't care if it's lifeless red rock, or if it supports life inimical to humanity, or even if Mars is turned into a New Eden of life for the human race. Mars is a planet, not a person. It has no personality or consciousness that we are aware of.

I personally would argue that If we are to colonise planets, Terraforming makes the most sense, and is indeed ethically desirable.

We as a species are growing exponentially. We will run out of space on this planet, and as our species continues to expand, we will need more and more space. Bubble cities simply will not cut it space wise.

Therefore, it depends on how your universe is developing. If you want something quite cyberpunky and dark, go with Bubble Cities, Floating Towns, Undersea Atlantian metropolis.

The slums of an atlantis would be fantastic for some cyberpunk - dingy light filtering through from the surface, corporations rationing your o2, dodgy recycled "rations"...

Alternatively, if you're going more utopian, go with a green garden planets your characters can frolic in, or make them part of the process :)

While o.m. raises a valid point that you want your structure to be sustainable, terraforming wouldn't be worth it. There is the potential to upset the balance in the solar system, and it's overall way too much work. It would be much easier to just reinforce their space bases.

It would be a lot easier to take it in small parcels, a dome here, and asteroid there. Maybe your people have metal woven into their clothing, and live above giant magnets. Or create some kind of gravity generator. Or spin an asteroid.

Not the answer you're looking for? Browse other questions tagged space-colonization terraforming or ask your own question.

5
What are the advantages of terraforming over living in space stations/constructs and visa versa?
18
Could you maintain breathable oxygen for long-term space travel through shipboard gardens?