Would it be possible to terraform the moon?

I have a "simple" question that is the basis for an idea I'm developing: Is it possible to terraform the moon and, if so, what type of technology would be needed?

I understand that this isn't the case because of its current state, but, for arguments sake would it be possible to do this if certain conditions were met: an artificial core, some artificially imposed atmosphere, bring water, life and vegetation, etc.

For clarification: The terraforming would need to be man-made and be able to sustain humanity as it currently is from a biological sense (no additional breathers, pressure suits, etc.). This means that there would need to be some form of green plants, soil, water, free moving air, gravity, and the ability to grow plants and raise animals.

Short answer... no. Longer answer is, it depends. The biggest restriction I see is lack of atmosphere. Just supplying it with an atmosphere is a short term solution as, by itself, the moon doesn't have sufficient gravity to keep an atmosphere from leaking into space. This particular question was asked on another site:

Quoting from one of the answers:

A commonly quoted rule of thumb says that the escape velocity needs to be 6 times the gas's mean velocity in order for that gas to remain captive to gravity and the values I quoted are related by a factor of only 5. The air would contain water (since dry air is very uncomfortable to breath) and carbon dioxide (as a by-product if not also needed to sustain the cyanobacteria/plants you would want in place of planetary size mechanical carbon dioxide scrubbers, then there are the nutrients you would need to sustain those) which would readily exacerbate an atmospheric greenhouse effect and, with the moon being at about the same distance from the sun as is earth, you would expect the air to warm up to similar to earth temperatures, though without the moderating effect of oceans, and so cause the oxygen to dissipate. As nitrogen is lighter it's mean speed at the same temp is higher, v_rms something like 0.51 km/s IIRC, so it too would dissipate as would water vapour.

In short, it doesn't seem likely that it would be possible on the moon.

But, since you mention an artificial core of some kind, maybe one that creates an higher than natural gravitation effect, that could be circumventable, if it justified the cost of drilling to the core of the moon to install the device.

As @Saidoro mentioned, you need to introduce all the volatiles required for life. This includes atmosphere, hydrosphere, and Nitrogen.

It's easy to find enough water and oxygen in the various ice moons and comets throughout the Solar System. However, compared to the amount needed, nitrogen is pretty rare. You'll need to expend some thought about how to get enough.

As you can tell by looking at the Moon, the volatiles won't stay around the Moon over geological ages.

So if you do provide the Moon with volatiles, how long can you expect them to stick around?

There are many Atmospheric Loss Mechanisms. Unfortunately, only one of these (Jean's Escape) is easily calculated.

Wikipedia has an excellent and scientific chart showing different body's ability to retain an atmosphere over geologic ages. 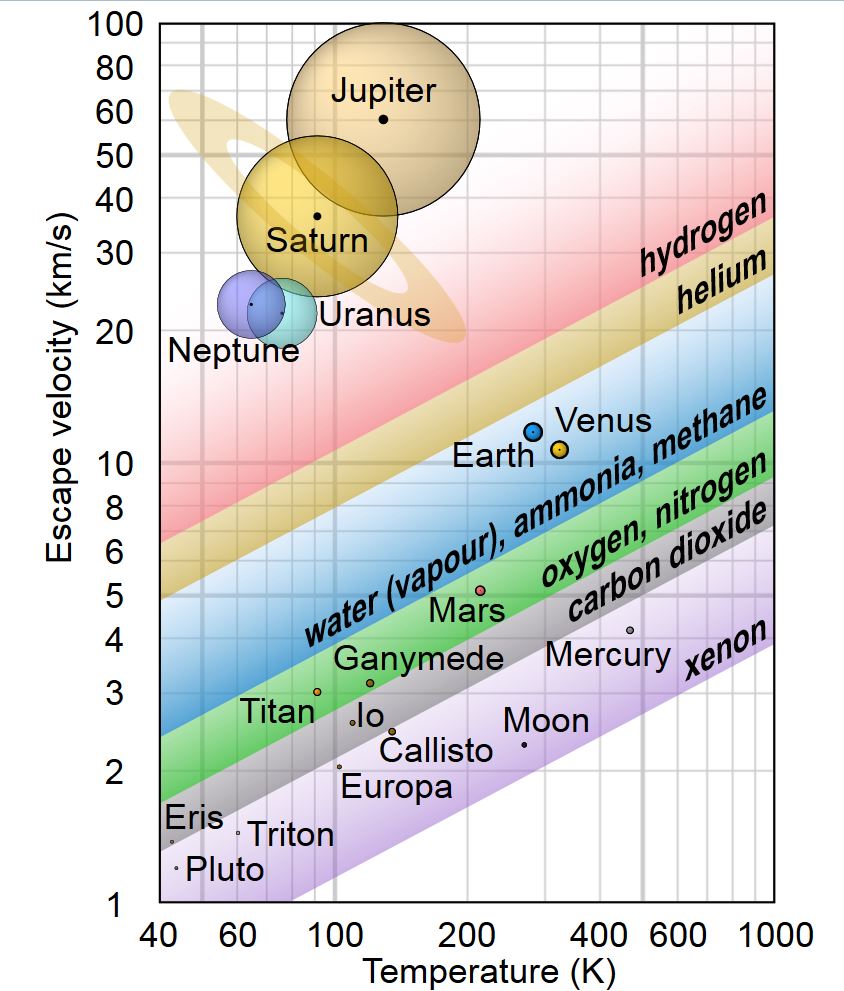 However, I've created my own chart based upon Jean's escape. I apply a "fudge factor" to cover the other escape mechanisms and it gives the half-life of different gases around a given body. Be aware that my chart assumes that the body has a thick atmosphere to begin with so certain loss mechanisms such as sublimation and sputtering aren't an issue.

According to my chart, you could expect water added to a thick atmosphere around the Moon to have a half-life of around 200,000 years. A very long time compared to human civilization. A very short time compared to geologic time.

I like all the answers above. One possible method would be to build an envelope around the moon. This is an alternate to giving the planet an entire atmosphere, which it would periodically lose and need replenished, but it's still a gonzo engineering feet and the envelope would be subject to regular meteor strikes and punctures. It would need regular repair, or perhaps, some self repairing technology and leak plugging - that's no simple task.

Another method, which I like, would be to dig a very deep hole into the moon and have a kind of deep underground dwelling, with big fans to enable circulation and mirrors to reflect in sunlight.

As an earthly example, the Dead Sea is some 400 meters below sea level and as a result, it's atmosphere is about 5% more pressure. Source. On the Moon, with 1/6th the gravity of Earth, well, calculating it gets ugly, but if you dig a hole, some, 30-50 miles into the Moon's surface, perhaps at a steep incline to avoid direct sunlight but still take advantage of reflected sunlight. It might be possible. 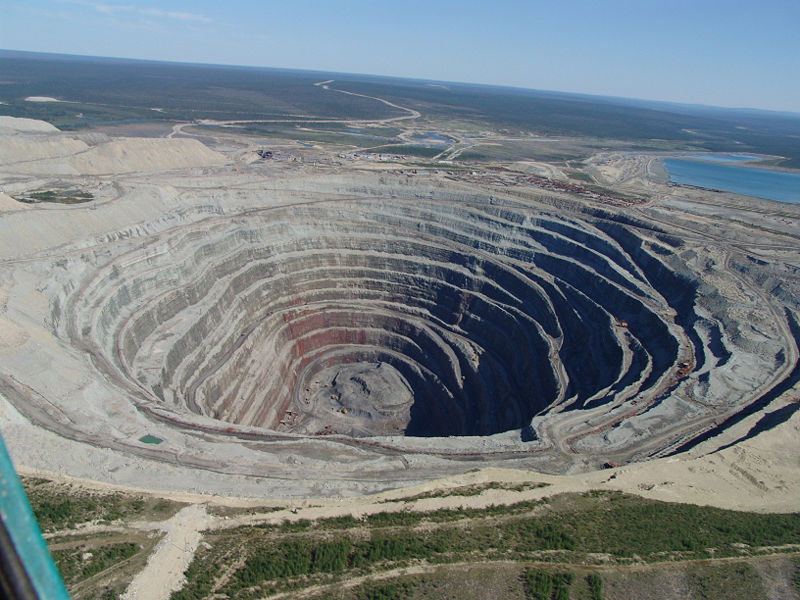 The hole or whatever you call it (Atmosphere well?) should requires far less replenishment of atmosphere than the surface terraforming idea. There would still be some, you'd need a light atmosphere around the entire moon to avoid too much loss and preserve most of the atmosphere in the deep hole, but it's more feasible than making the surface habitable.

Another alternative, with enough energy would be to generate to Oxygen directly from the silicate material of the moon, so the oxygen would be generated from within the hole.

Digging deep into the Moon might provide water sources and other minerals as well. I'm not sure anyone would want to live in a hole, but it beats living in a pressurized suit, never going outside.

Additionally, a few changes would need to be made to the animals and plants who would be living there, most notably adaptions for the decreased gravity and atmospheric pressure and for the increased radiation caused by the moon's lack of a strong magnetic field.

Once the technology to do all of that is available, the moon will be terraformable, and will likely be one of our first targets for doing exactly that.

Terraforming is a beautiful, and ridiculously simple principle, that is more than godlike in theory. There are, however, two major issues that limits the amount of terraformable celestial bodies to a very small number:

What can you do then? I prefer the idea of building domes, then building more domes, with their own gardens, greenhouses and other life-supporting facilities to produce oxygen. Then, it might be exposed to the lunar surface as an attempt. Or, if possible, building extremely huge domes, that might be able to support clouds and rains within! Very partial solution, but I can see the outcome of it.

I agree with @Random's answer about the Moon having insufficient gravity to hold onto an atmosphere in the long term, so it would have to be continually replenished. There's other important considerations for terraforming the Moon (and Mars): low gravity and the lack of a magnetic field.

The Moon lacks a magnetic field. Space is a harsh place, but Earth's atmosphere and magnetic field protects us from most of it. Lunar inhabitants will be exposed to cosmic and solar radiation. I don't have a radiation exposure map for the Moon, but I do have one for Mars where you'll be recieving a dose of about 0.25 sieverts per year. 1 sievert is a 5.5% increase in cancer risk so the lunar population will have a very increased risk of cancer.

This can be mitigated somewhat by adding certain molecules to the atmosphere, such as ozone, to block solar radiation. Cosmic rays are unpredictable and difficult to block without a powerful magnetic field. Solar flares can be predicted and lunar inhabitants will have to take to shelters.

Then there's the problems of living in a low gravity environment. Everything we know about human health says this is bad for humans who have evolved for billions of years to take advantage of a constant gravity. The biggest long term problem is a loss of bone and muscle mass and a tendency for bodily fluids to pool in the upper body. There's no long term cure of this.

Others have noted with up-to-date caclulations that the Moon would hold on to air long enough to be useful to people settling there, were it to be introduced.

That confirms the assertion made in a story I recall, about a near-future society (no super-duper tech) that co-opted a mission to redirect a comet, and had it crash into the Moon instead of just missing. The story ends with the appearance of a fuzzy look to the moon, with everyone excited at the potential.

Another story I recall featured moons of Jupiter (I think), where the first one done just has added air which needs a bit of topping off from time to time, but the later ones have a membrane to keepmthe air in.

In Wil McCarthy's Queendom of Sol series, the Moon and other small bodies were crushed to give them a smaller diameter and higher surface gravity. In his novels, industrial nutronium marbles are a thing, and whether he supposes gravity holds it together stably or some other finishing treatment is needed is not explained.

However, the late Robert L. Forward covered the topic with the intention of being "hard" sci-fi. An asteroid layered with carbon and a shaped charge (of anti-matter) produced a collapsed-matter disk encapsulated in diamond strong enough to maintain the internal pressure.

Not the answer you're looking for? Browse other questions tagged terraforming moons or ask your own question.

30
How to wrap the Moon in plastic to make her a giant, supported by the atmospheric pressure, greenhouse
5
How would we terraform the moon?
5
How can I keep an atmosphere on Mars?
4
Can we make rain on Mars?
3
Creating a habitable planet that recieves the same amount of sunlight as Venus
4
Why would anyone consider terraforming Mars, considering it can't hold onto water vapour?
3
Holding in an atmosphere primarily using a magnetic field

18
How long would it take to terraform a lifeless but somewhat earthlike planet using bacteria, fungus, seeds and eggs?
3
Is it possible to terraform the Moon and if so how soon?
4
Conditions for ideal/quick terraforming candidates that cannot currently support life
4
No More Looking from the Same Side of a Mostly Liquid Surface Terrestrial-based Moon
11
How do I increase air pressure for the planet Mars?
4
Can I have a glacier on a tidally-locked shallow-sea planet?
5
How would we terraform the moon?
3
Would this setup of a terraformed moon hold up?
3
Minor terraforming that allows people, and doesn't inconvenience local flora and fauna
7
Protecting Mars with no magnetosphere: Can genetic engineering help?