How to Terraform a Dead Earth

In the foreseeable future, a scientific community has discovered an alternate universe in which the solar system centers around a binary system of G-type suns, unlike the one G-type that ours orbits. The first planet is a diamond-crusted carbon planet twice as wide and eight times as massive as Earth, orbiting the second star from a distance of 1.1 million miles. The second planet is a Venus-like planet 175% as wide and five-and-a-half times as massive as Earth, orbiting both stars from a distance of 109 million miles. In the habitable zone is the third planet, an Earth-like planet 5800 miles wide with the following features:

This alternate Earth is also more volcanically active, as indicated in the dimensions of its oceans:

The atmosphere consists primarily of carbon dioxide and methane, but it still has 2% as much oxygen as our Earth.

In every respect, it should have life. The problem with that is that it used to have life, but we have just missed a mass extinction severe enough to wipe the slate clean. 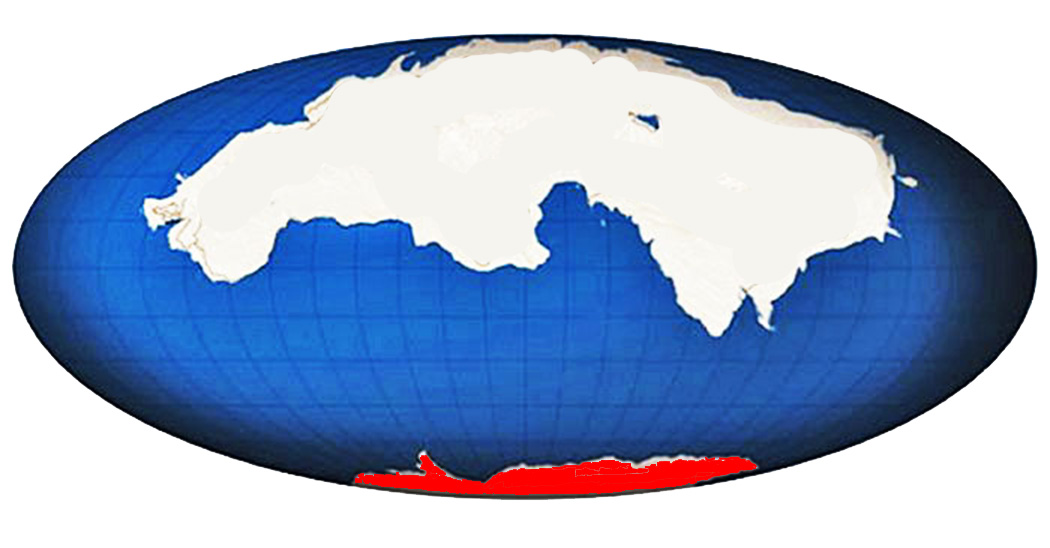 This is a map of "Asgard". The red presented at the bottom of the map is the cause of the crisis that wiped out all life--a large basaltic plateau representing a volume of 80,000,000 cubic miles and a maximum elevation of 9,800 feet. Such a series of eruptions would have released enough greenhouse gases to wipe out even the toughest of organisms. So this Earth-like planet is too extreme for our first wave of terraforming pioneers, blue-green cyanobacteria, to thrive. Through a combination of natural and manmade means, how do we cool down the planet and possibly dilute the acidity of the oceans to the extent of making cyanobacterial colonization possible?

Is the planet really hot with all this water?

In order to keep an ocean of this size without evaporating and lose itself to space even with a heated environment, with absurd amounts of greenhouse gases, this atmosphere is probably quite massive and exerts significant pressure. So there must be a high amount of water vapor that combined with the amount of aerosols that the continental masses are capable of generating should make the world quite covered with clouds.

Another indication that the planet does not seem to be as challenging for terraforming and that it has methane in large quantities, that is to say it has hydrogen, the lightest, volatile and elusive element has not escaped from there. Look at Venus with that suffocating atmosphere that would best be described as a sea of carbon dioxide in a supercritical state. When we read that there is only 3% nitrogen in the atmosphere it is almost surreal to think that these measly 3% are the same as 3 times our own atmosphere and more than 4 times the total nitrogen we have in our air. However, almost zero hydrogen. If Asgard has hydrogen, excellent.

So, the biggest problem, at first, seems to be the excess of carbon on the surface that must continue in the deep cycle and be buried again in the depths. Being a geologically active planet indicates that the planet will do this for itself, in their time, in millions of years and what people in yours history will need is just to speed things up.

This huge ocean makes things quite easy too: it serves as a large sponge to absorb excess heat and atmospheric carbon. The quickest way is to desaturate these things with bacteria that will use all the heat and carbon to multiply. If they have no predators and no predators evolve from themselves, they should multiply as long as there are these conditions that one wants to clean and form deposits on the bottom of the oceans. Then, the carbon cycle simply continues, unless someone finds it profitable to use those abyssal deposits as motor fuel.

There will also be an enormous amount of carbon dioxide and methane in the atmosphere that the hydrosphere will not absorb by itself. This will require measures similar to some of the solutions proposed to clean up our excesses on Earth, like this, this and this.

A side problem is that before the great volcanic spill the planet's surface was already sufficiently oxidized. If it has not been all the initial work of the bacteria it will not revert to atmospheric oxygen. Before that, the oxygen released from CO2 will react with the soil and keep the atmosphere still poor in the gas. However, as you say that the planet once had life and it is less dense than the Earth, it is quite reasonable to assume that its crust is already quite oxidized.

Not the answer you're looking for? Browse other questions tagged science-based terraforming alternate-earth or ask your own question.

3
Can A Theia-Like Object Make Earth Richer?
8
The Great Oxidation Event...Artificially Imposed on a Tharn-Like Alternate Earth
5
How Would These Planets Affect Earth's Eccentricity?
2
The 42-Hour Day: Episode I: Ocean Currents
2
The 42-Hour Day: Instant Extinction?
6
What Will My Alternate Earth's Climate Be Like? (Basically Speaking, Not Asking Much)
3
In This Picture, How Far Can One Binary Orbit the Other?
4
What Would the Climate Be Like on this Extreme Alternate Earth?