What would be a propitious environment in which centaurs could evolve?

This isn't a question about an anatomically correct centaur and its features, but I will assume general characteristics of a centaur and the objective is to find what environment would allow an ancestral hexapod to evolve until acquiring said characteristics. This is a way to explain the presence of centaurs.

I will not focus on the absolute origin of these hexapods.

This question arises from the fact that I was unable to think about an adaptive motif to an environment in which a centauroid creature could evolve.

Considering the principal features, humanoid torso over a horselike body. A horselike body indicates highly cursorial habits, with massive lungs to permit powerful races and unguligrade legs with just one hoof, while the humanoid torso has an erected section of the spine exactly over which the horse's neck and head would be, having two long arms with a high mobility range and manipulator hands on them, indicating arboreal habits or that he has to stretch its arms over its head to reach its food.

What I mean by this is that it seems that a creature as similar as possible to a centaur could not evolve naturally, without magic and without things like genetic modifications, since its characteristics seem mutually exclusive or only useful in very different environments (possibly jungle and plains, respectively).

I have tried to find my own justifications but I am not really convinced. For example, a herbivorous animal that needs to evolve in order to reach its food in the crowns of the not-so-scarce but not-so-abundant trees in a savanna; maybe this creature would need to search on the trees, but in this case it's more probable for it to just evolve as a hexapod giraffe, just lengthening its neck.

So the question is, what environmental pressures will lead an ancestral hexapod to evolve into a "centauroid"?

To consider, the ancestral hexapod could be just a primitive mammal but with six limbs, but at the discretion of whoever provides an answer, this creature could change if it considers it so.

There is one kind of creature that already has four legs and two arms: the praying mantis.

Now let's think of a place with large bugs: Australia. In a continent where spiders eat birds and centipedes eat bats and snakes, it would be very advantageous for a mantis to be really big as well.

In such an arms race for size, without human interference and given a few more hundred millions of years, Australian bugs might start evolving more specialized respiratory and circulatory systems to beat the the Square Cube law. I have already provided an extensive answer on how spiders could do so in order to become driders for an older question.

In this case here, mantises might develop book lungs like that of arachnids, then as they grow in size through the aeons they could develop actual lungs. They might also evolve to have an internal chitin skeleton, and lose a lot of chitin outside, otherwise they will be seriously impaired and slow and not very mobile.

At some point in evolution they will be too heavy to fly, so they will lose their wings. They will compensate by becoming runners, so their legs will evolve to be like those of a horse, chitin hooves and all. And since they will no longer prey by ambush, but rather by run-and-disembowel-the-target, their eyes will become front facing.

Over time they might develop larger brains, and with that the ability to make tools. At this point making better tools is a selective ability, so their current arms will trend to develop towards a more handy shape (drumroll).

So there you have it. Your reallistic centaur is not a charming horse person frolicking in some European grove and dancing with the pixies, but rather a lovecraftian, crickety piece of nightmare fuel running around and hand-goring emus in the Aussie deserts.

Elephants and gazelle give you an answer

Human arms are actually quite different from their climbing ancestors, so there is no reason they have to have been used for climbing. your creature could simply evolve the human like arms from a less used limb. the arms would be used ot grasp and collect food. we already see a similar model today, elephants, a grasping "limb" on a quadrupedal frame. they use the trunk to bring food to the mouth, just like humans. an elephant without a trunk can access very little food and would not survive.

You also have animals that use their front limbs to pull food to the mouth, outside primates like this Gerenuk, the front limbs are even adapted to grasp , although they also have to double duty as hoofed feet, your front feet will not have that problem and can be fully adapted just for grasping and food acquisition. 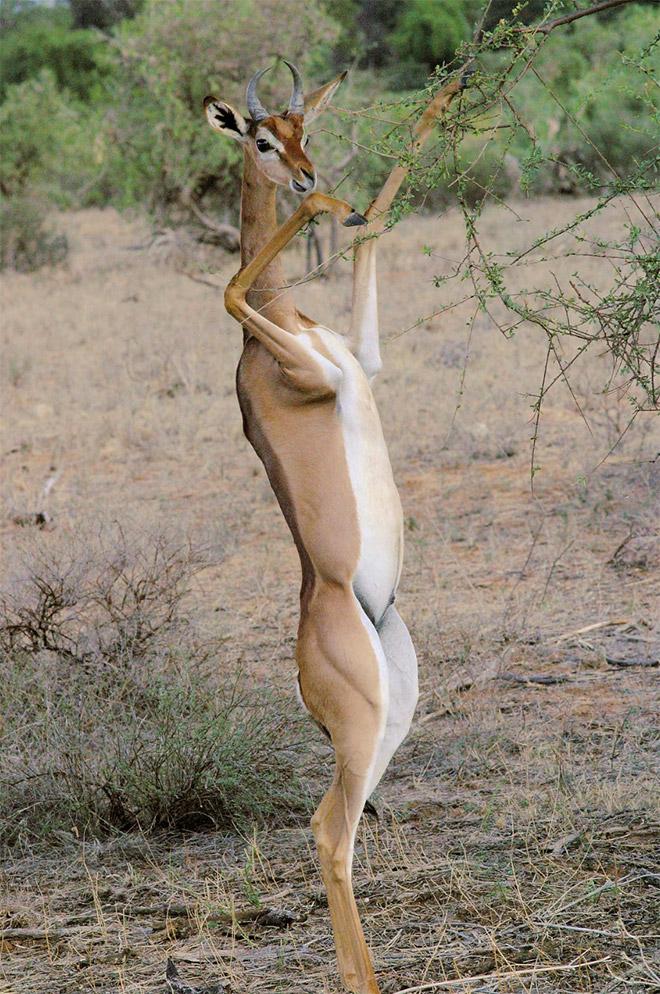 You will have to ask yourself what the front limbs were used for before but they could have been very different creatures then. Early horse (eohippus) feet are far more similar to primate feet. If you want to give a nod to this give your centaurs 4 fingered hands instead of 5. you could have started with a 6 limbed Eohippus and while the 4 hind legs became cursorily adapted the front two became grasping adapted for pulling food to the mouth. 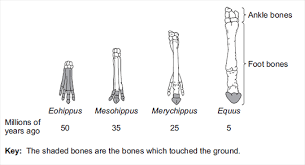 For one, where are the lungs in your creature? If it is in the horse part what is in the rib cage human part? the human part does not have enough room for big enough lungs. You will also have a hard time getting enough food through a human mouth to feed a horse sized body. You may want to use something more like the horses around during the origin of the centaur myths, which was significantly smaller than modern horses. Think more pony sized.

I think the most likely ancestor for an hexapod should be a crustacean like a crab: they already have more than 4 limbs and already live at the border between water and land.

Moving to a more dry-land type of life, they would evolve lungs and all the other shenanigans, reducing their limbs to six in the process.

From there they could use the rear 4 for locomotion and the front 2 for manipulation, think for something like grabbing food which grows above ground level.

Consequently the most likely environment where such a body plan seems to be useful would be a place with sparse vegetation and tall trees/bushes.

I can immagin a savana with some higher trees with very delicios fruits.

Start with a six legged rabit thing. He runns around, eats roots, and (not like a rabbit) insekts. There are a lot of threats around. Rabbits sit often on there rear legs and try to get there head as high as possible to look around. our six legged friend can do the same, even while walking. When he becomes better in looking around, while runnigng, he will survive more hunter attacs. he lears to grab insekts and nuts for eating and he becomes bigger to reach more nuts and fruits on the lowest parts of the tree. Food is rare, and he needs to walk long distances each day for food. he becomes even bigger and develpops horn ond his 4 Legs. the 2 front legs are used only someties for grabbing. (like apes) Than he starts using rocks to kill smaler animals. His hands develop know and he becomes more and more to a hunter. The eys move from the side to the front. And there you have the lucy of centaurs. But i have no idea, how they get humenlike heads, when there evovle humans in the same world. that would be a to big coinsidence

The only real way I can think of to get a human-like body is as a brachiator. The centauroid form seems like a natural result of a brachiator adapting to the plains like humans did: It'd start with the 4 legs clustered around the lower part, before the hindlegs would extend outwards so that the back can help push off when running

Not the answer you're looking for? Browse other questions tagged science-based biology creature-design evolution ecology .

41
Anatomically correct Arachne
12
Would a humanoid insect species even lift?

19
Anatomically Correct: 4-legged sapient creatures (“centaurs” etc.)
6
Alternate paths to orthostasis
6
How to correctly insert a kangaroo like balance and support tail in a humanoid?
4
Anatomy of a sexual "parasitic" specie with small and intelligent females but large and “brute” males
4
Naga evolution based on varanids
6
How could a quadrupedal human evolve?
4
What would be the best design for a a versatile humanoid leg, but at the same time pretty good in every function (universal leg)?
2
How the limbs should be correctly positioned in the body of a "quadrupedal hexapod" humanoid?
3
Ecologically Correct Onocentaur