Naga evolution based on varanids

In some moment I saw a sketch representing some kind of naga, you know, a mythical species with human torso and the rest of the body with serpentine form, but in this case based on a speculative evolution of a varanids species, I never found the image again but I liked so much the idea to try to polish this idea.

Basically I searched and found some information for explain the anatomy of naga like creature with varanids.

Varanids currently are very good swimmers using anguilliform or serpentine moves to swim this might cause the reduction of the hind limbs by adapting to aquatic environments, this gets more sense when the principal environment of many varanids species is at coastal regions and islands, in addition to this, these species are closely related with mosasaurids and snakes, the first group really became fully aquatic with hind limb reduction (not completely but with notorious size difference in some species) and for snakes I remember some theories which explain the lost of limbs caused by aquatic habits.

Till here I thought could have been explained the presence of a large snake-like body.

Then, to explain the humanoid part of the body. Many varanids are arboreal too, some species just during their young and other during their entire live, this life style eventually might evolve hands to improve the arboreal locomotion, at the same time getting more complex shoulders and expanding freedom of movement of the arms, improving the object manipulation, maybe with some time would change some aspects of the rib cage.

For other "human" characteristics, varanids species are very intelligent too, they know how to count and have one the highest and more active lifestyles in reptiles with a four chambered heart, this would permit the energetic requisites of turn to a sapient specie.

This all is because I want to make some "realistic" Naga specie evolved in a natural way without genetic engineering and the options from the answer "anatomically correct naga" didn't convince me.

But my problem with all those ideas and combine them in a single natural creature is about if all these characteristics could evolve together.

They are almost there now. 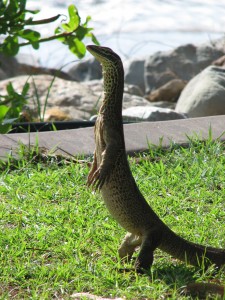 Monitor lizards are already facultatively bipedal. Not having loads of personal experience with varanoids I would have guessed this was mostly the little ones but no; it is the big ones. They rear back on hind legs and look around.

The evolution of bipedal postures in varanoid lizards

In several of the 58 or so species of extant varanid lizards, genus Varanus (Böhme, 2003), individuals can attain remarkably erect postures without running (Murphy & Lamoreaux, 1978; King & Green, 1999; Pianka & King, 2004). In these cases, the bipedal posture (BP) is not used for locomotion (e.g. walking, running); rather, its function seems to be a defensive display and it permits an enhanced inspection of the environment (Pianka & King, 2004; C. Clemente, pers. comm.)...

In considering the origin of autonomous and stable erect postures in Varanus, we suggest that BPstanding evolved from BPcombat, which itself probably evolved by way of stereotypy of dominance contests...

Facultative bipedalisms is more common in large bodied species. Suprisingly to me, being arboreal means a lizard is less likely to be bipedal, probably because large bodies make that lifestyle more difficult.

You could have forelimbs modified for tool use. I like the vision of these bipedal lizards routinely carrying staffs to help them stay upright. For bursts of speed they would drop to all 4s.

Well now, There are the D&D Nagas, and they are a sort of nasty large snake. A huge amount of Chinese/oriental dragon mythology is actually about nagas (because they didn’t like the idea of snake-related beings involved with so much responsibility for the texts), and then there are the nagas from Nagaland; but commonly they are known to be snake-spirits: their physical manifestation is that of a snake, but their spiritual manifestation looks more like a human (to humans).

Nagas are said to be literate animals, and are very able - but much of them lives in a non-material plane of existence. Just like companies, corporations, countries and nations do.

Not sure I helped at all!

Not the answer you're looking for? Browse other questions tagged science-based reality-check creature-design evolution humanoid .

2
What would be an environment conducive to the evolution of varanids based Naga?

19
Anatomically Correct Naga
19
Evolution of ophidian sapience and caudal tool use
5
Could Naga Reload Muskets while Marching?
3
How heavy would a Naga be?
10
Could a serpentine dragons exist?
7
Can the cobra hood ribs turn to and be used as functional "pseudo-limbs"?
6
What would be a propitious environment in which centaurs could evolve?
3
How two-limbed creatures could evolve powered flight? (Amphisbaenia)
2
What would be an environment conducive to the evolution of varanids based Naga?
1
Why a dromaeosaurid would evolve to lose its legs? (to become an Quetzalcoatl/Amphithere)