Could a super cannon be viable for transportation of human beings?

In my setting, humans live in isolated "burrows" with an immense and dangerous forest separating them. Rather than planes or helicopters, trains and super cannons are used for travelling. The train is used for more affordable, slow travel while the cannon is built to get people quickly to another burrow. In addition, it's also used by a class of soldiers for rapid deployment, similar to paratroopers or the glider troops of WW2. I was thinking that they would either be inside the "bullet" shot or they would be in a glider of sorts that is attached to said "bullet" and the glider would detach to take the troops where they need to go. Space travel has not been invented, so it will not be used for that, just traveling on the surface of the world. How viable would this be?

Not viable at all

The problem is that you need a high speed to get a body from one part to another. If the burrows are within trebuchet range, it might be possible by only using those. But if you need super cannons, it isn't viable at all.

The simple fact is that you need a high speed. This high speed you need to achieve in the distance you travel through the cannon (else it's more rocket powered). To achieve this, you need high acceleration. With such high acceleration, you'll be dead. Even if you make the cannon really big, the main power is often explosives. To accelerate the person, you'll need to use a sabot (they're not fully crazy) that can take the brunt of the force. Still, you're going to have a bad time with the crazy acceleration. To manage this better, you would need basically a sabot that holds the person, like with a mould. Then you need to have them hold their breath as they launch, as it's nearly impossible to breathe.

In short, the powers are simply too big.

However, you can use the gliding method. If you have a large enough village or burrow, you might be able to simply draw a person in a glider forwards. If you do this fast enough, they can get height and thus range. In addition, you can use glider (and some bird) methods with hot air circling to get to greater heights and fly to another burrow. So instead of building a super cannon, they might just be very adapt at making a glider system.

Not viable... unless maybe Nikola Tesla came on the scene just a bit earlier

With the greatest respect for my learned colleague, speed isn't the problem. Astronauts travel much faster than a bullet. The problem is acceleration.

Whether a small bullet or a large cargo/human-carrying shell, the nature of a cannon is that a big bang occurs, propelling the shell through a barrel. The mathematics of ballistics are well-known, but let's take an example from that link:

The consensus is that 9G is the maximum acceleration the human body can withstand and your cannon must impose a catastrophic 376G to ship the shell 75 klicks.

Your people are a thin, strawberry paste on the back of the capsule.

Now let's bring someone like Nikola Tesla or one of the pioneers in magnetics into the mix...

Let's pretend that on your world Nikola Tesla was given decent funding, was able to actually stay focused on one project long enough to do something useful with it, and was born early enough to affect your world. What might you have?

Modern rail guns are, in fact, quite a bit worse than cannons when it comes to acceleration — but that's because they can. They can also, over a long enough distance, more slowly accelerate a capsule to pretty much any velocity. This is good for you! Because it means you can use the argument of a magnetic rail gun to lob pretty much anything you want as far as you want.

As long as you explain the "barrel" length.

The honor of the largest practical super gun1 goes to the Schwere Gustav, a WWII monster with a 32.5 m barrel length. And you can now see your problem. Long, straight tubes (or open rails, but tubes are better for a lot of reasons) are a pain in the honking neck. Just to lob your soldiers to lunch, 75 klicks away, you need a muzzle velocity of 860 m/s and you need to get there in less than 9Gs. Let's use 9Gs for convenience just so you know your shortest "barrel" length.

I have one word for you, just one word... centrifuge

How do you get a 4 km barrel length? With a coil! Spin the troops around a dozen times and spit them out a short length of straight pipe! We've been spinning astronauts around for decades, so we know it can be done, right?

Suck it up, cupcake!

And it would make a cool story....

1 There have been longer barrel super guns, but not by much. The Paris Gun in WWI was said to have a barrel length of 34m. The award was given to the Schwere Gustav for a number of reasons including its calibre. Let's face it. It was a bad boy and whomever was on the receiving end experienced a world of hurt. 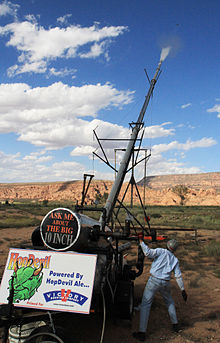 Pumpkin chucking, or for rhyming purposes punkin chunkin or pumpkin chunking, is the sport of hurling or 'chucking' a pumpkin solely by mechanical means for distance. The devices used include slingshots, catapults, centrifugals, trebuchets, and pneumatic cannons....

The pumpkin here (by the rules, unmodified regular pumpkins) is a stand-in for our fragile human frame. Acceleration that does not fracture the pumpkin will be tolerable by a human. An air cannon provides a relatively gentler acceleration over a long barrel as compared to a military cannon that accelerates using explosives. Your people have giant long barrelled cannons buried in the ground and are accelerated by compressed air.

I am not sure how your people slow down. Maybe flying squirrel suits? The pumpkins slow down very rapidly.

You could make it more survivable, if, instead of one big explosion, you used a large number of tiny little explosions, so you spread out the acceleration over a longer time period. Congratulations, you just discovered the rocket engine, and you no longer have a cannon, you have a rocket!

Not the answer you're looking for? Browse other questions tagged science-based science-fiction transportation .