This is the 21st century, everything that we have. Technology to make cars, planes, trains, boats, all of that stuff. But then, in this world, everybody is a winged-human, or angels.

What would a civilization of angels use for transportation, and why if they could just fly to places?

We have transportation because of our flimsy legs, and convenience. Would you like to walk one mile for 15 minutes, or drive the same distance under a minute?

I believe this will be the same concept for winged humans. If it's more convenience for them to use transportation, they will do so. In this case, planes will definitely still be viable for long distance travels to other countries.

But we don't just use transportation to get one person from A to B. We use it to transport goods as well. Would a winged human fly all the way to the store and back while carrying groceries? Probably not. Hence, huge boats carrying goods from one country to another is still going to be used. Luxury cruises will still be there. Trucks delivering goods from warehouse to the stores is still required. And cars will help winged humans from bringing back groceries or furniture from the store to their homes.

I think that infrastructure would be the biggest change for a civilization of winged humans. Perhaps there's a lot more tall buildings, as they're easily accessible for one that can fly all the time. Doors at the ground is no longer the entrance, perhaps a lobby in the middle of a tall skyscraper would make more sense. But I'm getting off-topic here.

In short: Yes, transportation is still going to be used by winged humans due to convenience.

Humans can walk from place A to place B, so why do we need land transportation? Movement is tiring, energy consuming. True flight would be quicker, but still laziness drives inventions.

The main reason these angels would have for traveling over land would be transport of goods. Therefore, most of their land based vehicles would develop in that direction. They'd develop means that are similar to ours: cattle drawn carriages, then the emergence of motor vehicles, with trains and trucks being the focus.

Alongside that things that make short distance travel possible would also be favorable, as most long distance travel will be quicker through flight. The human equivalent of bicycles will not happen as bikes do not seem like a comfortable travel option with the wind wreaking havoc on your wings. I assume the first form of passenger travel vehicles will be sort of like tricycles, with a windshield up front. They'll not be a prevalent form of transport though. Cars will come around eventually, but these will be decrepit, roomy machines compared to what we have.

Water transports will develop in parallel to how ships developed in real world. The water bodies will remain the easiest form of transporting goods across long distances. Boats and ships will develop as such.

Ships designed to carry passengers will also be equally prevalent, as they offer the option to distant lands in comfort. Unpredictable weather and lack of resting grounds will convince even the most hard headed angels that he cannot simply fly to the distant lands across the sea.

I believe this is where the technology will be most alien. The first form of air transport will most likely not travel.

While flying itself is tiring, taking off after landing takes huge bursts of energy. Angels will prefer to use higher grounds as take off points so they can just drop and catch the air instead of producing vertical lift. But finding a high ground to rest may not always be possible.

The first form of aerial transports would be these cluster of hot air balloons that are rooted in a fixed position. These will act as land marks for watering spots. The angels land on them, and these balloons then transport the angel to the town under them. Once his/her stay is over, the balloon lifts them up again, so they may take off.

While humans also started out with hot air balloons, the angels will take the balloon technology further, and not go the typical airplane route. I cannot imagine a being capable of flight willing to be strapped down to a metal cylinder with bad air-service to fly.

I imagine Zeppelins would be more prominent, some hosting on-the-air tavern service for the weary travelers, or offering services to take them a certain distance while they rest their wings.

Airplanes will eventually develop, with the focus again being on transportation of goods. But this change will come around much slower than with humans, due to the tangent it took, and probably not be as advanced as our 21st century equivalent.

1980's cartoons gave us the answer. They would use horses: 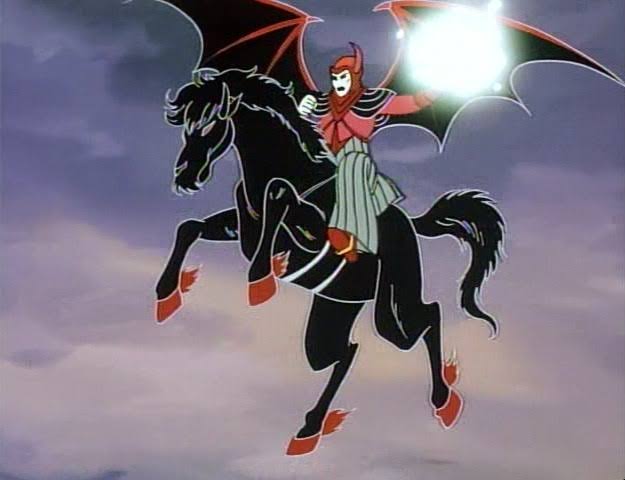 No reason other than the Rule of Cool.

There is biblical precedent for this. The four horde en of the apocalypse happen to be angels, as far as I know.

You could make it a class system. I'd imagine everyone flying at once would look like Woodstock. So the skies could be reserved for arch-angels or other figures of authority while the lower choir could be restricted to teleportation hubs

Not the answer you're looking for? Browse other questions tagged transportation winged-humans angels .

31
Aerial combat: winged humans
4
Is this humanoid dragon realistic the way I’ve imagined it?
4
Victorian long-distance express transport?
6
Horses vs. Bicycles in a soft post-apocalypse
1
What kind of transport infrastructure would there be in a new planetary colony?
2
can Elf be in family with Fairies and Angels?(updated)
3
What is an expedience of sci-fi gliders? these machines flying near the very ground
7
Transportation in a fantasy world without wood