In one of my previous questions, I asked about the viability of creating a coilgun for use on a sci-fi warship which would be capable of accelerating a 1000kg projectile to a velocity of 30 km/s or better, with a barrel length no greater than 100 meters. The answers I got indicated that the answer was 'possibly, but it's right on the edge of what is physically possible' and that actually building such a weapon might be beyond what could be practically achieved. However, in another thread on this site I saw someone mention Operation Plumbbob, a nuclear test where a bomb was placed down a sealed shaft, and its detonation blew off the steel plate sealing the shaft at a velocity in excess of 60 km/s. This got the wheels in my head turning.

In a discussion I had with Starfish Prime, he recommended that I use antimatter-catalyzed fusion for my sci-fi spaceship designs, since you need a miniscule amount of antimatter to induce fusion in a pellet of deuterium and helium-3, surrounded by lead. It allows you to extremely efficiently create small fusion explosions which can be used to propel your spacecraft... but what about using this technology as a replacement for gunpowder in a large warship cannon? Can I use it to get my 100 meter-long cannon to expel a 1000 kg projectile at 30 km/s or better? Or would such a weapon be doomed to blow itself apart?

EDIT: To clarify, my precise question is: Assuming I have the capability to use this technology to create a scalable fusion explosion on the order of, say, equivalent to 100-1000 tons of TNT, can I build a cannon which can contain and direct this explosion, using it to get the performance figures I want, without wrecking the cannon and/or ship? The cannon isn't restricted to just conventional designs, it could use magnetic containment or any other known techniques, if they'll help, but it has to recognizably be a cannon; as in a fixed or mounted weapon attached to a larger ship.

It won't be a cannon at all, but a warhead.

This sort of device was actually investigated as far back as the 1980's under the Strategic Defense Initiative, and was part of a wider ranging investigation to harness the power of nuclear devices to drive weapons effects, so called "Third Generation Nuclear Weapons"

The basis of all these devices is to encase the nuclear "physics package" in a radiation case with one opening, so in the microseconds before the case is destroyed, the energy of the device is preferentially released through the hole. This can then be used to energize other materials, and create plasmas, shaped charges or explosively forged projectiles and even "shotguns". The performance of these devices was calculated to be amazing, the "shotgun" could fire pellets as fast as 100km/sec (at that speed, even a gram sized pellet would have the kinetic energy equivalent of a stick of dynamite), while the other proposals would have projectiles moving at small fractions of the speed of light. 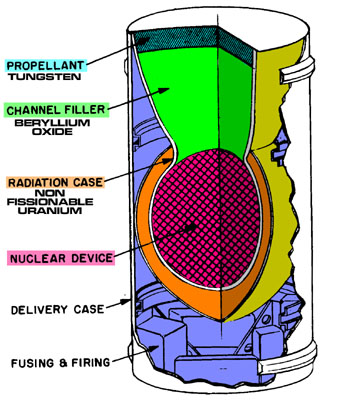 Orion pulse unit. This is the basis of all third generation weapons

There is no free lunch, however. While up to 85% of the energy of the device can be captured and used to drive weapons effects, attempting to "narrow" the cone of energy to increase the range will cause a falloff in the amount of energy being delivered to the target. There is discussion in many of the links below, but the overall conclusion is the best way to use this sort of device is to drive an Explosively Forged Projectile, which has the benefits of capturing a large fraction of the energy and having a long range (by virtue of simply being a large, unitary "cannonball", rather than a cloud of pellets or a stream of liquid metal moving at various speeds along the length of the stream). A spindle of star hot plasma will be energetically similar to a laser, at least until the plasma disperses

Because the driver is a nuclear explosion, the radiation case will be consumed by the activation of the device. This means you will not have a "cannon", but rather the warhead which can be fired from a mass driver or mounted on a missile bus. Fourth generation devices may be smaller due the lack of a fission trigger, but will still have a massive energetic release when activated. If you reduce the amount of nuclear fuel to minimize the explosion, then the amount of overall energy being released will also be less. Remember, you can only harvest 85% of the energy, so a nuclear "hand grenade" is going to have far less effect than a device who's output is measured in kilotons or megatons. Given the great ranges and possibility of missing due to a minor aiming error or small movement by the target ship 300,000 km away, a cloud of pellets or a bunch of hypervelocity darts moving at .03 c are the sort of weapons that you will need. 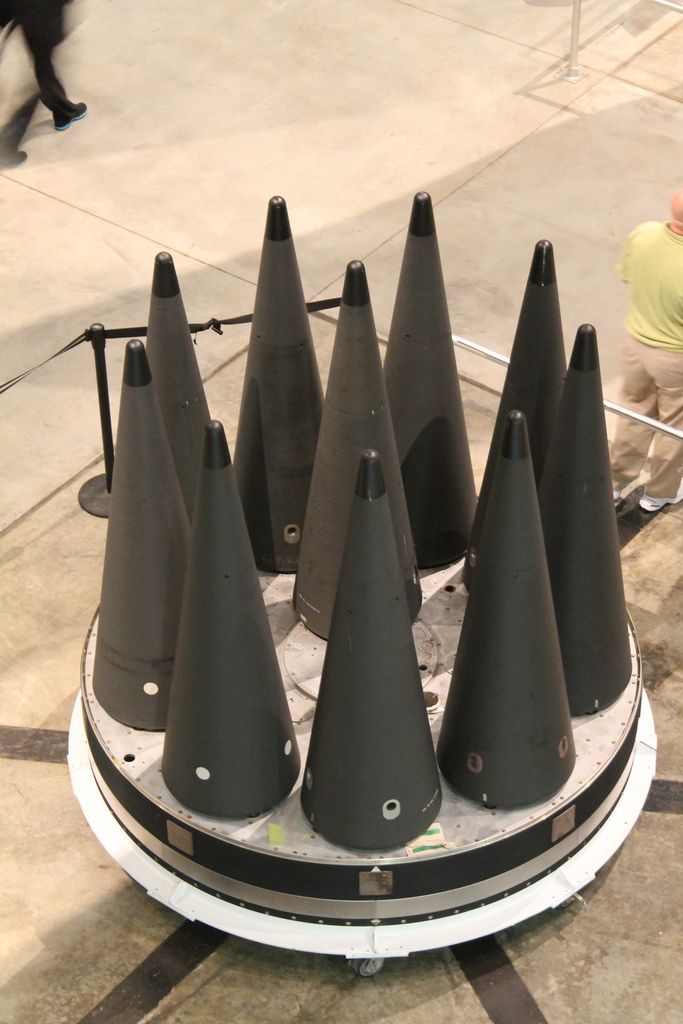 This is the real business end of a space warship

I think I'm pretty much saying the same thing as Thucydides except in laymen's terms. The issue with using a nuke would be blow back and fouling. Blowback being the amount of energy released back onto the, i guess you could say nuke cannon. That would be a very bad thing in zero-g. It would act as a propellant against the ship. And the fouling could be potentially be very nasty; coating the ship firing the weapon in fallout.

Have you explored the use of maybe an electromagnetic Railgun? The recoil is apparently very low while still being able to accelerate the speed of a large solid metal projectile at incredible speeds.

Inefficiency will kill you, because nukes generate a lot of energy, and you don't want all that energy going into your ship or your launcher. All nuclear reactions will generate a lot of radiation. You're trying to use this radiation to heat some form of propellant (which may simply be the bomb casing) which will then expand and push a projectile out of the barrel.

Absorbing all the x-rays, gamma-rays or neutrons from the reaction is going to be impractical unless you have a colossal propellant charge. All the radiation you fail to absorb will heat your gun and its surroundings, and you'll suffer from neutron embrittlement, neutron activation, photofission and photodisintegration and secondary bremmstrahlung radiation (oh my!) none of which you want to deal with. If you do absorb all (or most) of the energy, you may find that the average heat of your propellant is simply too low, and it won't expand fast enough and hard enough to give you the 30km/s+ muzzle velocity you need. You're then faced with a nasty tradeoff: if you want power, you have to put up with being cooked and irradiated. If you want safety and long weapon life, you have to put up with sedate muzzle velocities.

Secondly, efficiently propelling a projectile is an awkward problem. Not all the energy of your propellant reaction is going to go into the projectile. You might manage better than the 30% at the link (for a start, you probably won't be using rifling) but even small percentages of wastage are bad news. Your projectile needs at least 450GJ of kinetic energy. If the propulsion is an amazing 50% efficient, that means you need to put 900GJ in (and that's useful energy in the propellant, after all the losses mentioned above) and you'll dump the remaining 450GJ (108t of TNT equivalent) into barrel heating, barrel wear and escaping hot gasses which will act like a rocket engine on the firing ship.

Getting that muzzle energy may be even harder than you think. The Effects of Nuclear Test ban Regimes on Third generation weapon Innovation, the author speaks of a mere 5% efficiency in coupling bomb output energy to projectile kinetic energy. To get 450GJ in the projectile, you need a 9TJ bomb yield (2kt TNT equivalent). The high muzzle velocities you want are achievable (the Chamita test, part of Operation Grenadier, apparently accelerated a 1kg plate to 70km/s) but keeping the plate intact and flying straight is another matter altogether. With yields over a kilotonne-equivalent, the thermal radiation from the blast appears to be sufficient to disrupt your projectile long before it reaches its target.

Matterbeam's wildly optimistic post on nuclear EFPs notwithstanding, this just doesn't seem like a particularly great way to shoot a bullet. Consider, perhaps, using your micronukes to drive mini-orion missiles instead?

You may be interested to know that one of the early design proposals for Project Orion involved a big combustion chamber in which the propulsion unit was detonated, with the resulting products exhausted out of a nozzle at the back. The design was dropped because it massively increased the engineering difficulties, without adding anything to thrust or Isp. This suggests your nuclear gunbarrel approach isn't likely to be any better than an Orion-style external propulsion system. Irritatingly, I don't have the details of this dead-end to hand... I think I came across it in The Starflight Handbook, and I don't have a copy of that conveniently available anymore. If I locate one any time soon, I'll update this.

Not the answer you're looking for? Browse other questions tagged science-based science-fiction warfare spaceships .

9
How Powerful a Starship Coilgun Can We Make?