If visible light from the sun stopped hitting the earth but the sun still existed, how would this affect the earth?

In this case please assume the visible spectrum of light is anything a living thing can detect with eyes, so some infrared and some ultraviolet.

**Edit: **I understand that eventually everything would either adapt, bacteria is whack, or completely die off. If you could include how long you think that would take and what would die off first and the like, that would be nice. Also, Trioxidane suggested that this question was similar to another question. I'd like to clarify the sun isn't gone but most of the light coming from it is.

science-based planets sunlight
Share
Improve this question
edited May 8, 2021 at 18:08

(More than) two thirds of the power output of the Sun is in the visible spectrum; that's gone.

The rest is mostly in infrared and ultraviolet. Earth's atmosphere is opaque to ultraviolet, so that's gone too.

All that remains is about one sixth of the power which is in infrared... and which is nowhere near enough to keep Earth from freezing solid.

In a few days, temperatures on land will drop way below freezing. Plants and animals will die immediately; humans may linger for a while, but they will die too, soon enough.

The ocean will eventually freeze. Earth will become a ball of ice.

(The infrared radiation of the Sun will prevent temperatures from dropping low enough for the air to freeze, so at least the ice ball will retain an atmosphere.) 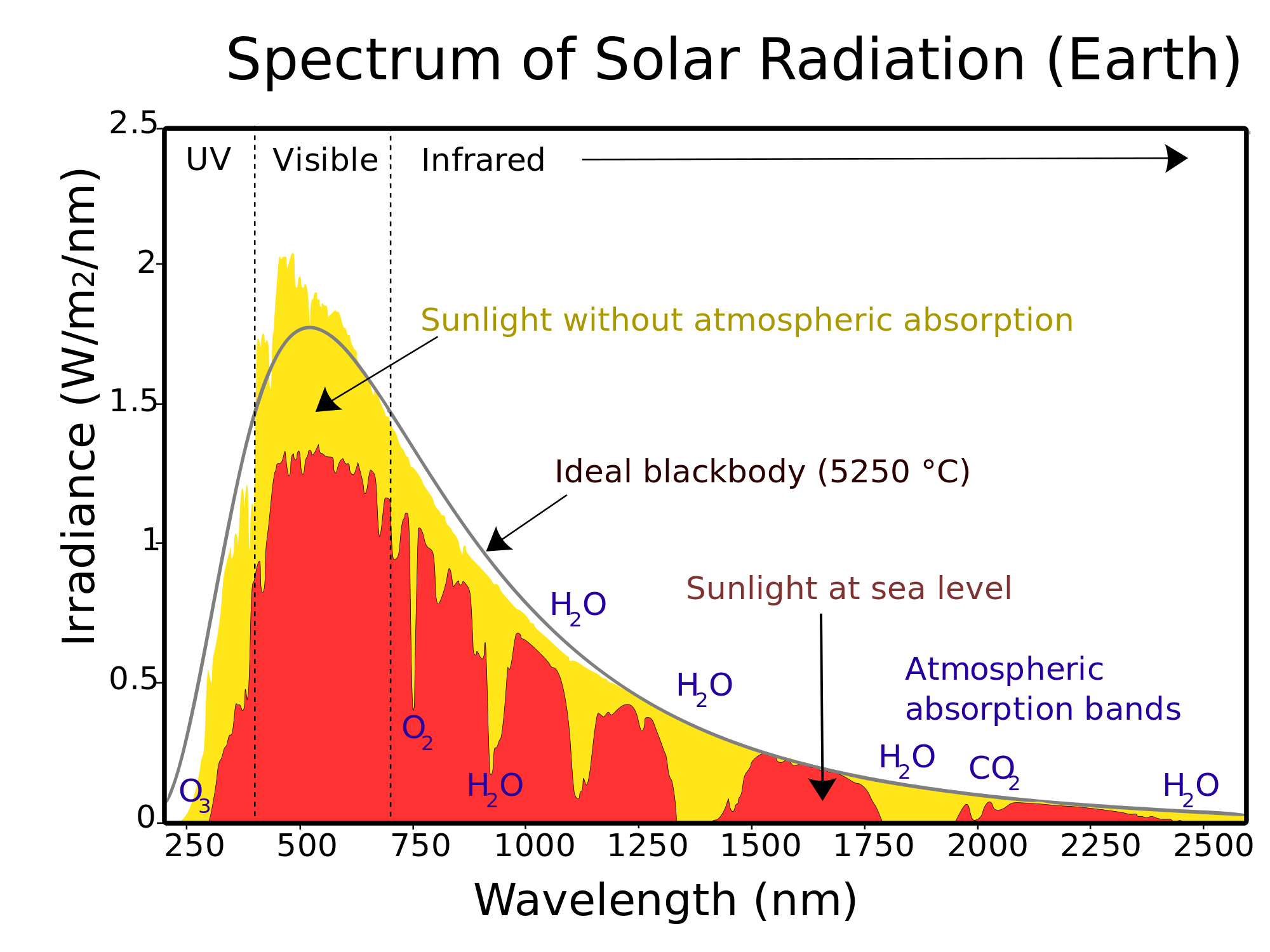 As can be seen from the chart, there is still a considerable amount of energy reaching the Earth - about 55%. The oxygen and water in the atmosphere is still absorbing and converting a lot of energy to heat. It is very doubtful the Earth would ever freeze over, and the greenhouse effect would not be much effected.

Since humans tan based on UV light, we would still be prone to skin cancer and such, and we would still warm up as usual on a sunny day, it just wouldn't be a bright sunny day.

It would be dark, but not completely, as the moon would provide illumination sufficient to see, depending on the moon phase.

Far-red absorbing chlorophylls are constitutively present as chlorophyll (Chl) d in the cyanobacterium Acaryochloris marina, or dynamically expressed by synthesis of Chl f, red-shifted phycobiliproteins and minor amounts of Chl d via far-red light photoacclimation in a range of cyanobacteria, which enables them to use near-infrared-radiation (NIR) for oxygenic photosynthesis.

And cameras in phones and other devices would still be able to take pictures.

Solar energy using solar panels is also not completely out of the question.

One of the ways scientists have looked to increase the performance of solar panels is by supercharging them with special kinds of nanoparticles. By doping these tiny particles with dyes containing metal ions such as lanthanide, it is possible to equip them with the ability to make use of other types of light (such as infrared) and then have it converted into energy.

Oh, and mosquitoes would still find us.

Mosquitoes, vampire bats, bed bugs, and some snake and beetle species, however, can use portions of the infrared spectrum for vision.

Not the answer you're looking for? Browse other questions tagged science-based planets sunlight .

18
Earth was suddenly teleported away from the sun. Can we recover?
19
If only the sun's light went out, how long would it take for all living things to die out?
0
Humans surviving on surface without Sun

20
How would life be different on a planet where intelligent life saw heat instead of colour?
10
Could aliens see in other wavelengths?
3
Colors of Things Outside the Spectrum
38
How to modify the human eye to see into the ultraviolet and infrared bands?
13
What would be different if a person has broader visual spectrum than normal
3
Simulation or API to get sun light spectrum on earth given the position, time and day of the year