[Note: this question was posted on Sandbox]

What would be differently perceived from a person with broader visual spectrum than normal?

So I've seen this question, especially the accepted answer, and it certainly is not what I'm looking for. The question asks for a man with the eyes of martial eagle. The answer, likewise, considers the acuity of a martial eagle's eyes, or any predatory bird in general. Likewise, most answers account for increased fidelity of the image from those eyes. What I'm looking for is more specific on the effect it has to have a broader visual spectrum.

In my scenario a particular person has a visible light spectrum of ~300nm to ~800nm, and is living his daily life among normal humans. How he acquires the ability is not important, and he has no difficulties dealing with processing the information, etc. This person lives in a normal human city at around 2000s, and does sometimes travel. Due to his acuity of vision happening to overlap with that of a normal person, he can easily distinguish normal human color, and also beyond.

Therefore the scope of this question is what is normally invisible for humans, but visible from the perspective of this person in:

Here's what I know and some that I don't so far.

I have aphakia, so I can address the near-UV end from personal experience. For the near-IR, I can only reason from other sources.

In daylight, subtle effects like the patterns on flowers mentioned in another answer are completely dwarfed by the giant UV source in the sky. Somebody seeing into the near-UV sees sunlight as brighter than others do, to the point of being painful at times. On bright sunny days, or bright winter days with snow cover, I have to wear protective lenses and/or squint to block out a lot of the light. Near-UV vision is a negative in broad daylight.

Near-UV shines, so to speak, in moonlight. Moonlight is just reflected sunlight, but the full moon is only about 1/400,000 the brightness of the sun, so someone who sees into the near-UV can see by moonlight without it being painful. My personal experience is that moonlight makes everything brighter (compared to what I see through glasses) and whiter/bluer. I've never looked for, or noticed, flower patterns or vole urine trails, so I don't know if that's farther into the UV or bees' and predators' eyes are different in this regard.

I would expect a human who can see into the near-UV without the loss of visual acuity that comes from aphakia to see well by moonlight, preferring moonlight to low levels of artificial light. (For example, when walking outside he'd probably prefer not to carry a small lantern.) Light-colored surfaces will be especially visible; he'll probably trip over dark obstacles the same as anybody else.

At the other end of the spectrum, near-IR vision will see thermal signals, the hotter the brighter. This is the principle used by night-vision devices that help military people see opponents. It's not so much an optical "seeing" like near-UV but, rather, heat made visible in near-IR. You'll see a person but not the details of what he's wearing, for instance. (Near-IR vision won't help you see stuff that's the same temperature as its surroundings.) I speculate that a very hot object could "blind" you in the way that bright sun "blinds" you in near-UV, and that near-IR vision will brighten things overall in daylight, particularly on a warm sunny day.

Things like remote controls and IR-illumination LEDs built into security cameras operate in the IR spectrum, so somebody with near-IR vision should be able to see them at least in a dark room. I don't know whether they would be too faint to see in a bright room for someone seeing both normal and IR spectra. I was unable to find anything that addresses how near-IR vision would affect what you see in daylight.

You're extending the range in both directions, so we need to consider how these two modifications would interact with each other. In bright daylight, as best I can tell, neither will confer an advantage and at least near-UV confers some disadvantage. (I think near-IR would confer a disadvantage too.) At night, you should be able to benefit from both; the reflection and fluorescence of near-UV is a completely different process from the thermal properties of near-IR. I was unable to find reliable information about how night-vision devices perform under full moonlight, which would give us some hint about whether they interfere with each other.

People who see in the near-UV and near-IR spectra in addition to normal visible light will probably be super-sensitive to sunlight. I would expect them to either spend less time outdoors or wear eye protection akin to sunglasses or chemically-variable lenses. In darker settings and under moonlight, however, they'll do better than normal humans and wouldn't want any filters in the way. If your humans solve their sensitivity problem with special glasses, therefore, they'll need a way to turn it off. (Sure you can just take the glasses off, but that leaves you with something you need to carry around and protect. Photochromatic lenses appeal to people who don't want to carry around an extra pair of sunglasses; your people will have an analogous problem.)

Color is a sensation; it exists in the mind. It is not a physical quantity; it does not exist in nature. Measurements of color (colorimetry) are made by necessity with respect to a "standard observer", that is, a human with no color perception deficiencies and average color perception. It makes no sense to compare color perception across species.

So the only possible answer is that "a person who can see light from 300nm to 800nm" would be able to see some objects in the dark, and some details in daylight, which are not visible to ordinary people. Nothing more can be said. 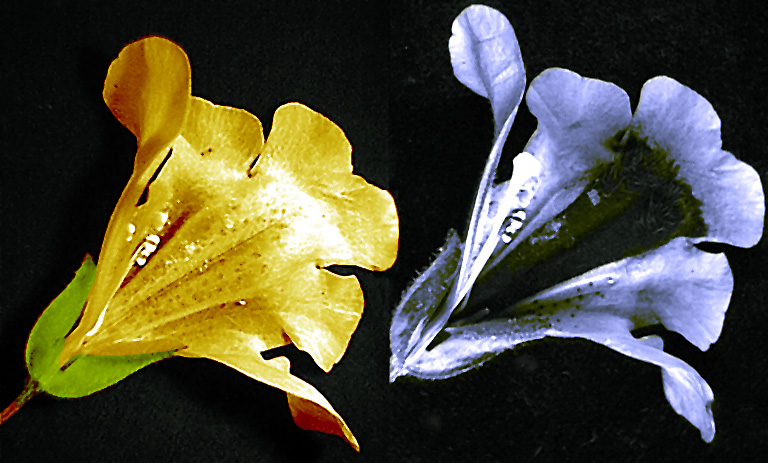 Images of a Mimulus flower in visible light (left) and ultraviolet light (right) showing a dark nectar guide that is visible to bees but not to humans. Photograph by Plantsurfer available on Wikimedia under the Creative Commons-Share Alike 2.0 license.

Normal visible spectrum covers about one octave, from about 380–390 nm to about 700–750 nm; the lower and upper bounds are fuzzy because the cut-off is not sharp, and in certain conditions light can be seen which wouldn't normally be sensed. So for daylight vision the proposed extension is quite small, about one third of an octave at the short-wavelenth end, and about one sixth of an octave at the long-wavelength end.

Not the answer you're looking for? Browse other questions tagged science-based society humans vision .

26
My protagonist can see UV light. What will she be able to see that others can't?
8
How would it affect a human to suddenly have the visual senses of a martial eagle?

38
How to modify the human eye to see into the ultraviolet and infrared bands?
4
The Six-Billion Dollar Man: Vision. Do we have the technology?
10
Can we identify distinct "colors" beyond visible light?
8
How would it affect a human to suddenly have the visual senses of a martial eagle?
3
Dragonfly Goggles
10
Realistic darkvision?
3
How do I explain the compound eyes of my creatures?
5
What does a timeflow-doubled superhero see?
2
If visible light from the sun stopped hitting the earth but the sun still existed, how would this affect the earth?