I have a post-apocalyptic world that is devoid of plant and animal life, although because of underground bunkers containing stored chemical materials and underground gardening,reservoirs,and mining, they are able to rebuild above ground after some decades have passed. One of the characters uses a mechanized wheelchair that spits out smoke (kind of like steam). Since coal is not available, I can't really call it a steam powered wheelchair. Is there an alternative source of power that would run a very fast wheelchair that emits smoke/steam? Thank you!

Hydrogen peroxide is just a watery substance by appearance, which has a magic trick. When you put it's concentrated form in contact with a catalyst (say: silver metal), it will expand by a factor of 5000 times pretty much instantly.

Now, it could be slowly fed into a piston like engine akin to a combustion engine in very small quantities quite slowly, or used to pressurize a reservoir then fed into a steam-engine like piston arrangement - or even could, for that extra boost be used as a direct propellant in a rocket type arrangement (as used in rocket packs).

Into the bargain, you can expect a gas/water-steam mixture at over 700C (1300 F) to leave a decent vapor trail wherever you go.

The mixture outputs a large volume of oxygen, anyone that you're passing by, should beware of their cigars turning into flares, their cooking stoves incinerating their food etc..

Steam engines emit steam. Heat boils the water and turns a piston, then the steam is released and pressure again begins to build. That is why steam locomotives had to fill up with water periodically.

If you have cheap electricity you could use that to heat water and run a steam engine.

Maybe there is nuclear power and batteries? Why not use an electric motor then? Maybe no-one could build one but they could build a steam engine? Or most likely, they had a good engine handy and for the chair, they retrofitted it to run on electricity as in the wikipedia example.

Gasoline will also put out some smoke. Diesel even more so. You don't usually see it coming out of the exhaust because it is so thin, but on old cars in dire need of repairs sometimes you see bursts of black smoke coming out. 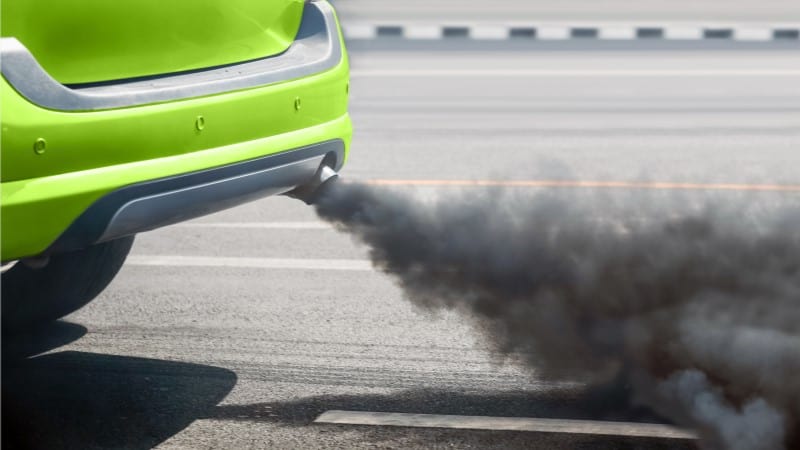 Source: literally the first result in Google for "black smoke from exhaust" for me.

Hydrogen is relatively easy to make with electrolysis. If put under pressure, you can get a pretty okay energy density. Burning is a fast form of oxidation, meaning oxigen is added. Adding oxygen (O) to Hydrogen (H) and you'll mostly get H²O. This is mostly water vapor at this point. Not exactly steam and maybe not what you want, but an option.

The creation only needs water, time and electricity. Pressurising is more difficult, but not unfeasible. It is probably one of the more believable ways to power things in a post apocalyptic world, as gas requires a heavy amount of refining. You don't just run one, while electricity and water is easy.

since you say the character or the people is a biological being, what about the people excrement or organic waste? people use it for coal/charcoal alternative, though i dont know is it compatible with your machine, but you mention coal, so i think it wont be much different. ignoring how your people survive without plant and animal, i just simply assume they has enough food stock/ration or do cannibalism to survive somehow.

Human feces can in principle also be dried and used as a fuel source if they are collected in a type of dry toilet, for example an incinerating toilet. Since 2011, the Bill & Melinda Gates Foundation is supporting the development of such toilets as part of their "Reinvent the Toilet Challenge" to promote safer, more effective ways to treat human excreta.[3] The omni-processor is another example of using human feces contained in fecal sludge or sewage sludge as a fuel source.

A Kenyan company is taking the excess fecal waste from residents in Nakuru and transforming it into a usable fuel source for cooking and heating.

Truck loads of feces are transported into the Nakuru Water and Sanitation Services Company’s processing plant, where they are emptied into vats and dried for two to three weeks. The dried chunks are heated in a kiln at high temperatures to burn off any harmful gases and increase the amount of carbon, making the feces more flammable. This step also makes the feces powder odorless.

After the material leaves the kiln, it is ground into a fine mixture and combined with molasses in a rotating drum to make briquettes, which look like round lumps of coal. These briquettes are sold for 50 US cents per kilo. Customers say that the fuel burns longer and with less smoke than charcoal and firewood.

Since only one out of every four people in Nakuru has access to the town’s sewage system, the briquettes could be an innovative solution to a big sanitation issue. Excess waste is dumped into rivers and poorer areas, creating health hazards. Although the current capacity for the waste-to-fuel processing plant is about two tons per month, the company aims to quintuple that amount by the end of 2017, reducing the amount of dumped sewage in the local area.

and here some video link for information about the power of human excrement as fuel.

Not the answer you're looking for? Browse other questions tagged reality-check technology power-sources or ask your own question.

2
What would be the effects of safe lightweight nuclear power?
3
Fusion Power and Plasma Propulsion
4
Alternative Power Systems
7
Plant that produces a lot of vegetable oil?
10
So much smoke that the suns rays never get through?
4
How can power levels matter in a magic system that emphasizes control?
39
Would it be possible to have a GMO that produces chocolate?
4
Thermal power sources - future tech alternative to steam