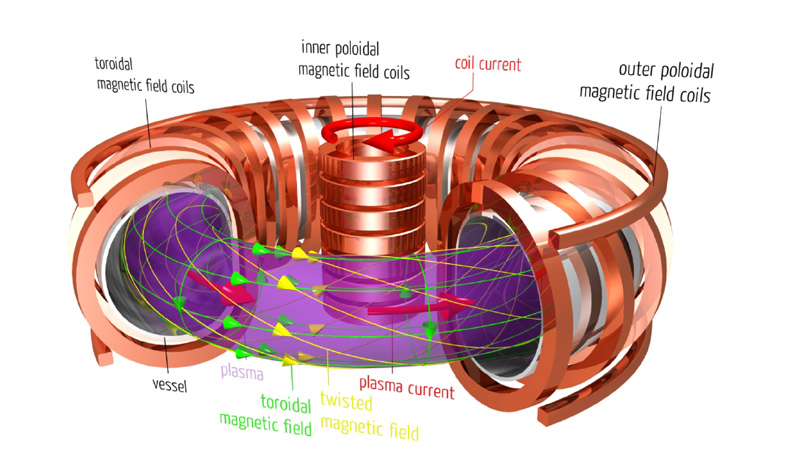 In the classic idea of a Tokamak Fusion Reactor, plasma races around an electromagnetic track. Is it plausible to "spin" off some of this rapidly moving plasma and direct it to nozzles for use in propulsion? Or is it more reasonable to generate plasma at the engine itself, as in the Vasimr Drive.

You probably could but doing so would likely induce instabilities in the Tokamak. Getting fusion to work in a Tokamak reactor is really difficult with regards to optimally turbulent conditions so shunting out heated plasma and injecting cold hydrogen seems like an inefficient and highly error prone way to create plasma for thrust.

A better approach would be to use the Tokamak to power electric generators that then heat the plasma to be used as thrust. This avoids problems with turbulence in the Tokamak and allows variations in thrust.

There are a lot of theoretical devices to generate fusion energy for propulsion, and most involve creating the plasma in a barrel or tube like reactor with "a hole in the end" for the plasma to accelerate out of. This is essentially a "flow through" type of reactor, and is significantly simpler and lighter than a Tokamak, and much better suited as a spacecraft engine.

The other common idea is some form of inertial confinement, where a pellet of fuel is "zapped" by powerful lasers or particle beams and the plasma reflected off magnetic fields to direct it for usable thrust. These are generally depicted as large parabolic reflectors mounted on the back of the ship, with the associated pellet injection and laser/particle beam apparatus mounted around the edges and the centre of the shield. Once again, while they can be physically large, they are still smaller and lighter than a Tokamak, and have the virtue of directly driving the plasma out the back with potential ISP's as high as 1,000,000 sec.

Since real world Tokamaks are massive devices (ITER is has a size and capital cost of a small aircraft carrier with all the associated systems attached), I would suggest that you consider purpose built fusion engines for your spacecraft.

Not the answer you're looking for? Browse other questions tagged technology spaceships power-sources or ask your own question.

4
Fission vs. fusion as a heavily-restricted sci-fi power source
18
Could edible fish live in a large water tank used as a radiation shield on a spacecraft?
8
Satellite salvaging: safely de-orbit and retrieve spacecraft or other objects
10
Low-efficiency fusion propulsion?
7
Capital ship reactor power
3
Manufacturing a new propulsion method mid journey
6
Is this a plausible interstellar propulsion system?
3
How to discretely sustain a plasma life-form?
6
Deuterium Fusion Reactor + Direct Energy Conversion - what sort of stuff would this sort of reactor need?