The Diclonii are an evolutionary offshoot of modern homo sapiens from the Elfen Lied series. Most Diclonii can get distinguished from humans thanks to small bone and cartilage horns resembling cat ears along with hair in varying shades of pink. However, a Diclonous' most notable trait are invisible telekinetic hands called "Vectors" which act as weapons and infect humans with a virus making them capable of only producing Silpelits (wholly female Diclonii whose only purpose is to spread the virus further). 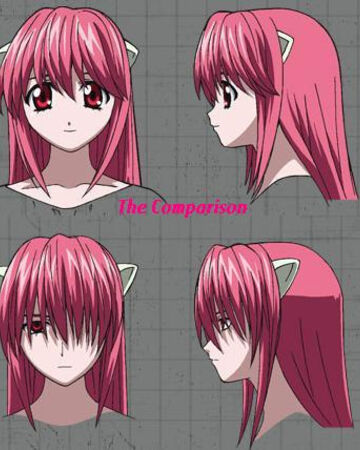 So essence, here the major traits of Diclonus biology that I wish to justify

I'm not interested in speculating on the mechanics behind Diclonius Vectors or what sort of contrived evolutionary history would make Diclonii evolve telekinesis. My main point of interest lies in using Earth or near-Earth biology, how close could I get to the Diclonii? Is there a reason that a Diclonius couldn't evolve?

I love this question so much, since this series has a special place in my heart. But now let's get to the boring part and see if we can get these lovely murder babies to work (Spoilers ahead):

1-The hair: The easiest go for me is for them to naturally produce beta carotene, while also having a different hair. You see, flamingos get their pink color not through natural pigmentation, but [due to their diet rich in this vitamin] (https://www.google.com/amp/s/www.britannica.com/amp/story/why-are-flamingos-pink), causing it to deposit on their skin and feathers. In humans however, the same substance in large quantities might actually cause hair loss and turn your skin orange-ish. So their hair must have a structure more akin to very long and thin bird feathers and produce the vitamin naturally as a pigment on that part only,(now to the manga) other hair colors would be explained by other pigments, but given that their hair works similarly to bird feathers, I don't think that would be a problem, maybe in each the code for a different pigment is active, while the others stay inactive.

2-the horns: Quick reminder that their horns can also grow beyond their cat girl appearance, as seen (SPOILERS) in this page: 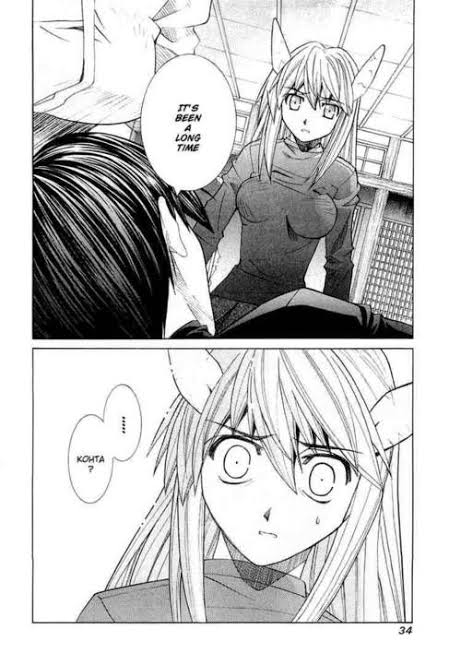 But other than that, they wouldn't be that different from any other horns, except for one thing: they also seem to be (MORE SPOILERS) related to their telekinetic powers, as Lucy's strength grows greatly with her longer horns. So my biggest assumption would be that the Horns are much like our bones, with a hard outside layer and an inside living layer filled with sensitive neurons and nervous structures that aid in amplifying their telekinesis, like small secondary clusters of nervous tissue in the middle, which would increase in size along with the horns, explaining why their breaking would induce a coma, extreme pain that causes the brain to shut down in order to protect itself, while also allowing the body to focus all resources on the regeneration of such vital structures.

3-The vectors: Plain and simple telekinetic abilities, mixed with strategy that simplifies such a complex power. Let me ask a question: what's easy to imagine for you?, a box being lifted by itself or two hands lifting it? Most likely the second. Condensing this power in the making of telekinetic structures would allow the diclonii to harness their ability more efficiently, as a bunch or tentacles that end in hands are easier to understand and control than the ethereal ability to move, while also giving them constant, ever present weapons/shields.

4-the brain: For the vectors to work well, we also need to look at the brain: to effectively harness their power like they do, diclonii will need much more efficient brains, most likely with larger surface area than a human's and have a somehow much quicker response speed, meaning signals travel at ludicrous speeds. In other words, diclonii need to have sharper instincts and faster response speed to be able to move their vectors at supersonic speeds and deflect bullets like slow peebles. That likely means they have greater numbers of extremely developed myelin shieths, which are responsible for increasing said speed.

Now, their ability to be able to sense other diclonii would be more easily explained by involuntary telepathic abilities. We assume they evolved from humans, which are naturally social creatures, meaning this could've developed as a means of being able to tell if there's anyone from your kind nearby, meaning you won't get separated or loose from one another unless you wish to. Their telepathic range could also be explained by varying mental power, also explaining the difference in number of vectors they can use at once. Lastly, their will to kill humans: either a strong instinct or simply the call of the void. Option 1 would be the easiest to explain while they'll kill while still young, meaning they're just driven to kill, with their vectors working in a way similar to our lungs, if we're not controlling them, the subconscious will; that way, they might act on instinct by accident and kill someone they didn't mean to, without meaning they'll have no control and kill every human within reach. Option 2 is merely an ever present feeling of "I can". If you ever stayed in a high place and thought: "I could jump and die", you know what the call of the void is. In diclonii, they're always capable of killing someone, but I still think option 1 explain the behavior we see better.

4-the metabolism They have a higher metabolism while young, and then it slows down as they mature. Apparently we grow at our speed because our brains consume a large amount of energy, meaning the body has less energy to grow. In diclonii, this would be solved by having more energy-efficient brains and higher, more efficient metabolism as children, meaning they'll be able to grow faster. Note: to grow, you need food and energy, to grow faster, they need more food and more energy.

5-the virus: That might be the biggest stretch in this. Telekinesis being used to form tangent shapes which can materialize inside people? Doable as far as it goes. Horns that amplify their telekinesis? Not too bad. The arms created by their mind being able to plant a virus inside men? Yup, that will hardly do. BUT I can tell you how it could work: similarly to crispr cas9 Originally found in a bacteria, crispr Cas 9 is basically a tool used for gene editing. Given that diclonii came from humans and expecting their traits to be the result of new chromosomes/new codes, the virus would work much similarly, migrating to their sack and altering the gametic cells to include the coding that makes the diclonii, this series of genes being dominant over any and all other forms of phenotypic traits present in human DNA. So, being able to produce a virus that alters the human gametes? Maybe not a virus, but doable. Having said virus be inserted through their vectors? Yeah that's just unlikely, at most you could make it airborne and capable of penetrating human skin, with the vectors acting simply as a way to force the "virus" to stay in a region close to the target's skin, but that's about it.

6-the evolution: Now, is this all doable? Maybe, but is it capable of evolving naturally? Not like we saw in the series. The amount of mutations necessary to reach something like the diclonii would take MILLIONS of years, and that's without mentioning the environmental and sexual conditions (I doubt differently colored hair would be advantageous for survival unless they lived in a giant rainbow forest) necessary to favor the creation of them altogether. It would be more believable for them to be the unexpected result of secret research on genetically altered humans, becoming able to harness the tools used to make them (crispr cas9) and use it for their own purposes.

There, the deed is done, hope I was helpful and sorry for the lengthy response, I summed it up as much as I thought I could.