Slimes are a common monster we often see in games such as Minecraft, Terraria and Slime Rancher, but it is never explained how such an animal can exist. How could the body of such an animal even exist on land, how could they go about in nature?

As we have seen in the games these animals populate a slime can be described as:

Assuming earth biology and natural occurrences, how could a slime exist? How could it move in such a way, how could it eat or even see? How does in not simply collapse like most slimy water animals do?

If we try and think of slimes as animals in nature, they must be composed of cells, or at the very least one cell. In fact, slimes do show an uncanny similarity to single-celled organisms, but there is a problem: there is a limit to the distance between the nucleus and the other edge of a single-celled organism. While we could combat this by having multiple nuclei distributed all over the place and there are animals that have this strategy; syncytium, or slime molds.

The slime needs to be multi-cellular, we do have multi celled "slime molds" called dictyostelium. It has a slug like face and crawls around as a discrete blob, but even though it is a good match, it is not a good candidate for what we want. Natural slimes mold are either too small or to in-cohesive. These are as close to the slime we need as nature gets, after this we need to speculate.

We know our slime has a firm shape, so it needs to have some kind of support structure, we also know it eats and has eyes, so it will need organ systems. Based on what we know, the slime will need to be a discrete organism, no less complex than your average jellyfish. In fact, let's consider jellyfish.

Jellyfish are soft bodied sea critters that use their "arms" to catch and eat food. Their body is shaped like a bell to push water and propel themselves. Jellyfish have to tissue layers; The ectoderm, forming their 'skin' and the endoderm, forming their gut, represented below by green and blue respectively. 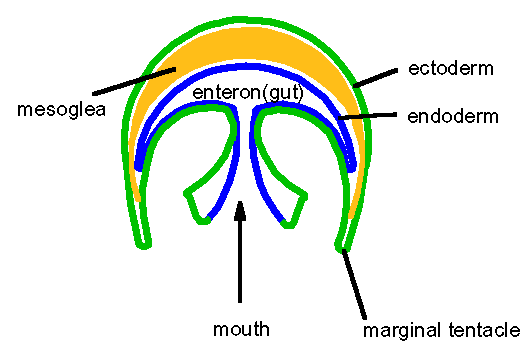 So for our jellyfish slime, we are thinking of a jellyfish with a ectoderm that is spherical rather than bell shaped. Comb Jellies are jellyfish that match this description fairly well. Most comb jelly species are roughly ball shaped as they float around through the sea. When stranded on land, they form small transparent blobs, 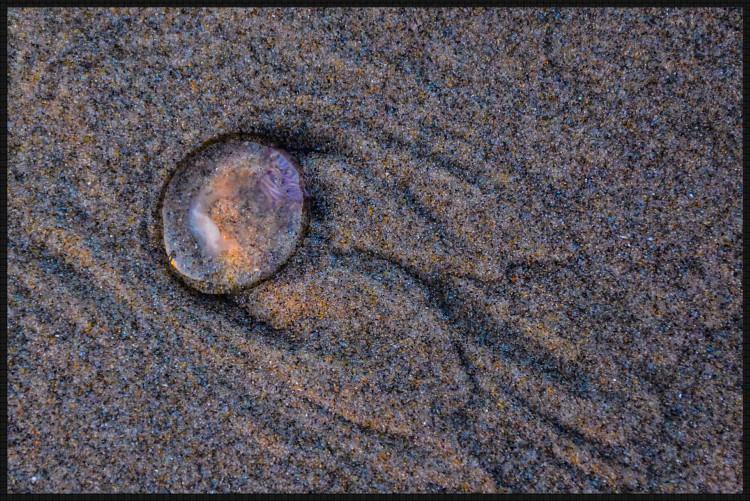 Rather akin to the slimes we are after, but the slimes we want are large, with a height ranging from a meter to a foot, though Minecraft slimes can and do exceed human height. To retain shape for such a large body a fluid-filled body cavity in the shape of a torus is needed, surrounded by muscle to keep it under pressure and combat gravity wanting to flatten it while on land. The resulting shape will be wide in the midsection, flat on the bottom and rounded on the top, which matches all of its depictions excluding Minecraft for obvious reasons.

The inner walls of the body cavity will be lined with cartilage akin to ribs, which, like a shark, will replace bones. All of the organs, excluding the brain, will go in this body cavity. The brain will not be a single organ but instead work like an octopus, with the neural system being distributed across the body.

We now need a mechanism to propel the body upwards like we see in the games, kind of like a pole-vaulter. Imagine multiple rods similar to a vaulting pole lining the body cavity. You would need at least four, though six or eight would be better. In pole-vaulting, the pole is bent down to store elastic energy, which is then released, launching the vaulter into the air. A central band of much stronger muscle goes in the center of the slime (which is also the reason for the body cavity being torus shaped) which pulls the rods and when released, vaults the slime.

But, this only launches the slime upwards, to gain direction a change must be made. Instead of having one muscle we need many, one for each rod. Failing to use one muscle results in movement.

Slimes are shown to possess a mouth but lack any means of getting food towards said mouth. However, slimes do possess another tool that could be even better, a slimy outer surface. Being slimy on the outside, food particles would just stick to the skin and move towards the mouth. The constant flow of mucus towards the mouth (which is then swallowed and excreted again to avoid waste) can be explained by having our slime be surrounded by small, roughly-beating hairs called cilia, like our lungs do, but on the outside.

Slime s are covered in an egg. So what I mean is that there is an outer layer of slime (pun intended) that is harder than the rest, it’s also what stops it from drying out. The shell is transparent and lightweight so the slime can move with out rolling. In the games a sword would just get stuck in the slime but it doesn’t! In Minecraft slimes multiply when they are killed so it shows that slimes carry their young. Even up to an age where the baby it’s self has babies. The shell supports the slimes and protects it. The shell would also have a certain amount of bounce so the slimes could move even before splitting.

Not the answer you're looking for? Browse other questions tagged internal-consistency biology creature-design evolution fauna .