Now I know there are different versions of the Greek monster Typhon, so first I will try to describe its properties.

That is pretty much all I know regarding it. There may be other sources on the creature. Irregardless I am curious how such a thing might evolve or exist biologically. I know most sources say it was mountain sized in the stories but that is biologically unsustainable short of something machine augmented. So I am imagining something more on the scale of a dinosaur which is at least from a sheer mass standpoint sustainable in an ecosystem.

What comes to mind for me is some type of hive mind. Perhaps Typhon is a collection of small insect sized creatures that are capable of flight.

The closest real-world alternatives I can think of are ant colonies or bee hives, where the entire group works toward one goal. Obviously, your Typhon would have to have a much stronger connection than an average bee hive, but the central idea is there.

This would help explain Typhon's disparity in sizes, as its size would change based on the size of the swarm, and would also allow you to explain the destruction that it causes as the swarm feeding, (extra points for the swarm being carnivorous or omnivorous). As for how Typhon could've come about, that's the tough part.

For this you might want to look at locust swarms. Every so often conditions become perfect for the this particular type of grasshopper to enter the "swarming phase." Basically it hulks out and gets with a few million of its friends to destroy every plant it comes across. So maybe Typhon is something similar. You could even have it be a normal insect that we have today that suddenly finds conditions to be perfect for it to enter a swarming phase.

Maybe conditions haven't been right since the time of the Ancient Greeks who saw it and developed the mythological creature named Typhon. For this to evolve there would have to be some advantage to swarming like this, so maybe it vastly increases the amount of food that each individual can get for a certain amount of time, while also allowing them to breed at an increased rate. Eventually this would become unsustainable and the swarm would dissipate until conditions become right for the swarming phase to start again.

This could lead to an endless cycle of the insect swarming and destroying everything in its environment, completely ruining the ecosystem and maybe rendering it uninhabitable, returning to normal for a thousand years or so, and then swarming again. Who knows, maybe the Sahara desert was one the Sahara forest before the first Typhon swarm began?

While Typhoeus (or Typhon) was a monstrous storm-giant, he didn't exist as a storm, instead he issued forth devastating storms from that dark nether-realm

There are multiple descriptions of Typhon, but one element that most of them have in common is serpent-like appendages and features. Combining the various descriptions of him would likely result in a giant humanoid (or humanoid dragon) with 6 snake heads from his shoulders (potentially more from his hands) along with a possible, second Dragon head (in addition to his own), and large bat-like wings and horns -- but again, there's no exact description of him. 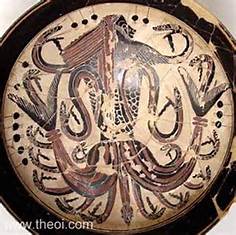 According to Nonnus's Dionysiaca, Typhon features more snakes than other descriptions (a "tangled army of snakes"), and stated that "every hair belched viper-poison" and that he "spat out showers of poison from his throat". This might potentially give him the ability to cloud himself in a toxic cloud, or storm.

So, if you went with the most common, mythological version, it wouldn't be too difficult to have it exist as a fictional, anatomically correct monstrosity.

However, if you're referring to Typhaon instead of Typhoeus -- that creature was indeed described as a hurricane. However, Hesiod was the only Greek poet to separate these names and account for two different creatures. Every written instance afterwards combined the two descriptions into the single creature known as Typhon or Typhoeus.