Skysteading: How to build a flying city

I am building a city in the sky; it floats thanks to hot air balloons and hydrogen. The main issue I have is how to make it grow, as this is not some kind of giant structure to start, it is a small(ish) structure that is supposed to grow as the economy grows and more people want to join for whatever reasons.

So I want a "basic unit" to which more can be added with time. Obviously, any space filling honeycomb will do, if this was the only requirement. The problem is that I want the habitat to grow as well, but that is to be concentrated in the lower center of the structure while the floating structure grows more rapidly since it is so much larger.

So what I need is a space filling solid from which tie cables can be hanged that align with the rest of the honeycomb toward a certain point to keep the structure rigid. Alternatively, any other modular system that remains rigid when weight is added to the same point will do.

The universal problem of growing cities is not unique, no matter if it is in the sky

Have a look at Barcelona: The old medieval quarter of the city had planning principles (or rather lack of planning) that prevented its growth, new development in the modern era favoured matrix style planning (a universal grid) to accommodate extendable development, which you could see very obviously in an overhead image: 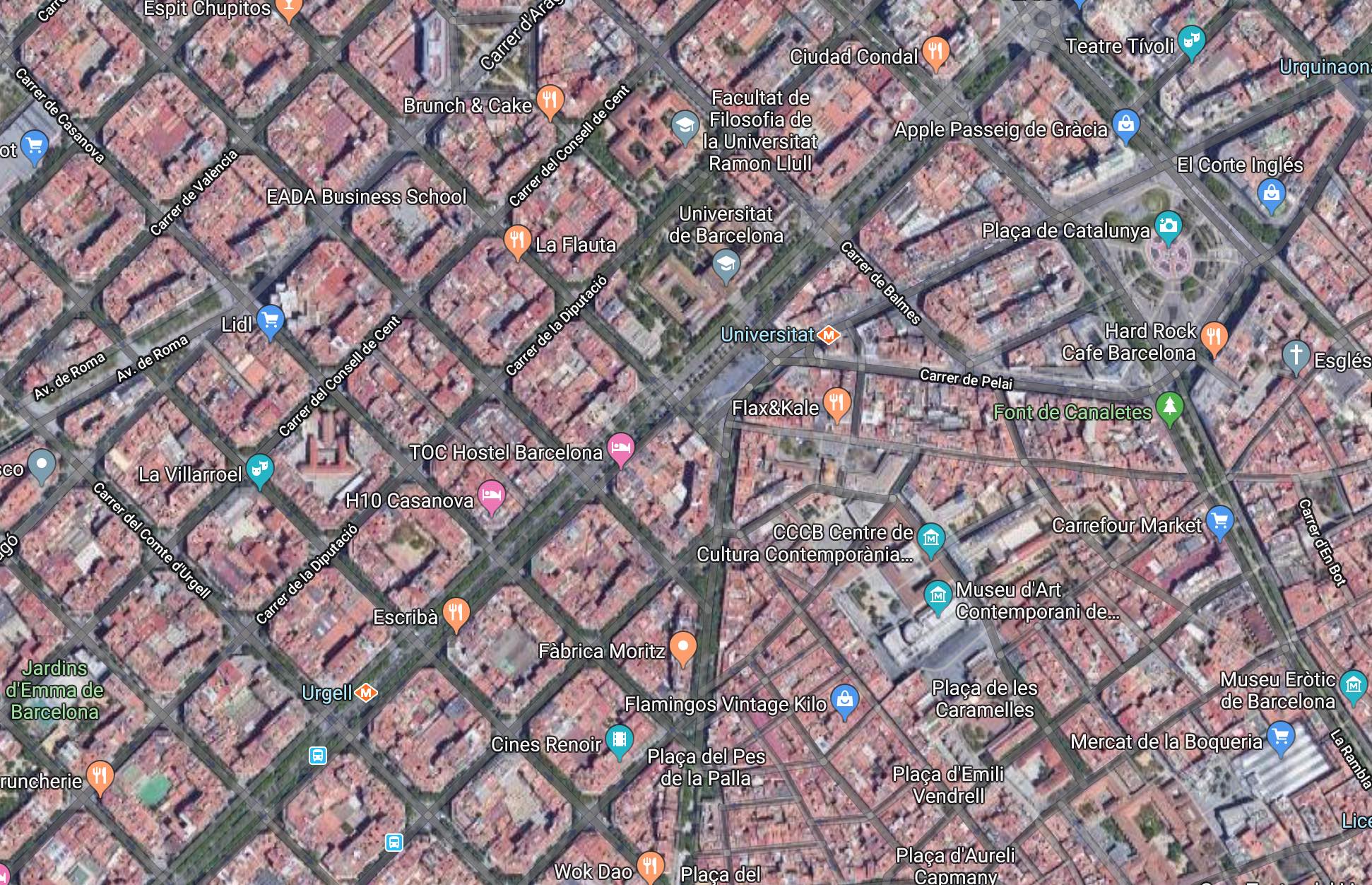 However, this also has drawbacks, with transport across matrices being slow. However it is by far the most flexible arrangement for growth. Most cities, such as Melbourne have matrix grids mixed with LA-style overlays of highways to cater for problems of transport.

In your situation the issues would be the same - however the advantage is that you have 3 dimensions to play with instead of 2 - with the ability to have either multiple layers of matrixes, or a 3 dimensional matrix structure. Study of the implications of this would be fascinating, and likely be based on nodal forms of development (such as activity centres and connections)

Your structural system might be nodal therefore to follow this, with large and small networks integrated either in a layered or evenly distributed matrix, or a combination of both. Each point could support others, reinforced as necessary. I would imagine not requiring much more than a network of steel cables would be needed dependant on maintenance and cost requirements (and of course: weight). Similar to nodally supported tensile rope playgrounds. 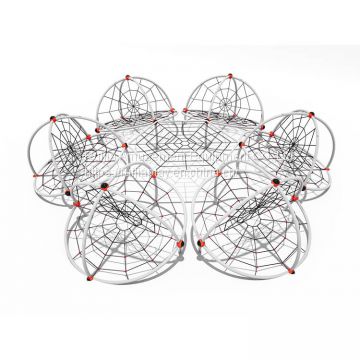 To support rigidity, the use of trusses would assist - replacing tensile members as you go. This would require constant engineering expertise to look at the whole structure, but would allow your city to grow organically without too much weight added and disturbing the overall structure too much:

Of course there are many other considerations for your city:

But these can be fleshed out in other questions... 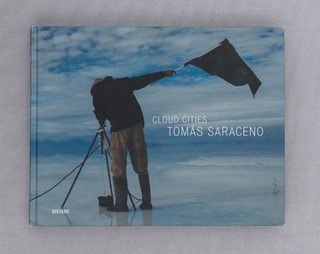 The general idea of that art project is to have solar-powered hot air balloons, where the amount of buoyancy is not bound by the gas volume, but rather by the amount of solar energy that can be captured - making the structures spread horizontally, and in a organic way, creating a web of connected aerostatic polyhedra (pretty much like a cloud of connected soap bubbles), as depicted:

This concept of "cloud city" aligns with your premises, i.e. it would grow organically as more people attach their balloons to it. It doesn't need any kind of regular structure, since a web-like construction should spread the tensile load around just as well as a regular grid, and connections don't need to be standard, but rather the sheet material should be easily movable around.

Now, what you don't want in a structure like this is rigidity. You want the structure to be flexible instead (and elastic), since it will be able to withstand hazards much better. Just like buildings in an earthquake shake table, suspension road bridges under load, or airplane wings being bent.

Also, since growth is supposed to be organic, I don't think such a city would create a central larger structure. If there's plenty of spare room at the sides, and buoyancy would suffer by vertical growth (making vertical expansion more expensive), why would people want to build that way?

After all, we already have organically-growing cities floating in a fluid, and they look pretty flat: 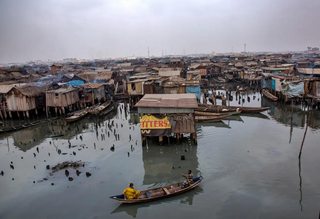 Now, keep in mind the economic principles why expansion happens that way - expanding horizontally is way cheaper, and it's organic and chaotic due to lack of regulation.

With this kind of cloud cities in mind, I cannot come up with a reason why the denizens would want to build a bigger (higher/deeper) structure in the middle. I can only think of large-scale exotic approaches, such as NGOs or corporations (or a massive government/community effort) installing a huge buoyant structure in the middle (a cloud-9 geodetic sphere as suggested in other answer?), which would prompt the connection of non-buoyant structures underneath.

I would investigate the potential for aerogel to do what you want. In current Terran implementations it's pretty lightweight and has fantastic tensile strength. I bet your advanced society could improve further.

The problem lies with scale: an actual floating city would start at a mile (1.6km) in diameter due to the physics of the structure and flight:

Geodesic spheres (structures of triangular components arranged to make a sphere) become stronger as they become bigger, due to how they distribute stress over their surfaces. As a sphere gets bigger, the volume it encloses grows much faster than the mass of the enclosing structure itself. Fuller suggested that the mass of a mile-wide geodesic sphere would be negligible compared to the mass of the air trapped within it. He suggested that if the air inside such a sphere were heated even by one degree higher than the ambient temperature of its surroundings, the sphere could become airborne. He calculated that such a balloon could lift a considerable mass, and hence that 'mini-cities' or airborne towns of thousands of people could be built in this way. 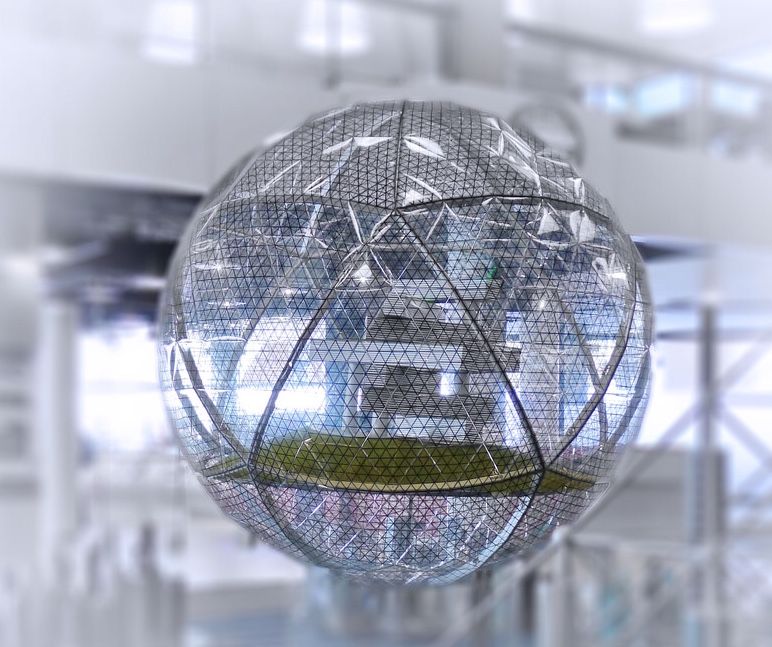 Since each individual floating sphere would have to be that size, the growth of a flying city would be dependent on the overall economy having the resources to build more tensegrity spheres of that size, then arranging for them to meet in the air where they could be joined by catwalks, bridges or other structures. Assuming there is sufficient demand for this sort of lifestyle, and economic justification for building and supporting such structures, then multiple units could be assembled in the air over time.

In order for the structures to have sufficient strength to deal with weather and not impede air transport or cause issues such as shading too much ground or blocking rainfall, they might be limited to "rings" of 7 spheres - the primary one in the centre and six surrounding it in a hexagonal formation.

This is going to be the most expensive "penthouse" type condominiums imaginable (a mile diameter sphere could hold perhaps 7000 people maximum, so even linking multiple "Cloud 9's" together you still only get the population of a very small town. And this town would probably need full time support from the ground, bringing fresh food and supplies while removing garbage and so on, just to keep the structure as light as possible. Any accident or deliberate action to cut off the floating city would be a catastrophe for the residents.

Not the answer you're looking for? Browse other questions tagged reality-check physics construction .

21
Vertical City - Why build it?
6
How Can I Build Ice On an Iceberg With Primitive Tech?
36
How long does it take to build a medieval city wall?
36
Can we build a roguelike maze?
18
How quickly could a country build a tall concrete wall around a city?
6
Would it be possible to build a submarine-like city?
8
Size of a flying city based on dirigibles