Can multiple space habitats be joined by tubes?

I wanted to create an extremely large space city which will be made up of many different large space habitats of ringed and cylindrical varieties.

Although each habitat will contain its own city or environment I wanted the collection of all habitats to seem like a city, rather than just a collection of habitats in close proximity.

To give the collection of habitats a city-like feel and look I wanted to join them all with tubes, these tubes will have different forms of zero gravity transport and provide a view of space and the other habitats, which couldn't be viewed inside a habitat as most areas will be enclosed.

The transport tubes could also be a lot safer and more organised than allowing vehicles to freely fly between locations.

There are designs for multiple cylinders counter rotating to provide stability but I am after something that looks similar to skyscrapers of different shapes and size joined by roads in a city, but instead it will be different designs of space habitats joined by tubes.

The tubes will either join at a stationary axis point or to a stationary outer shell, but as these rotating habitats can often spin out of position and will need thrusters to correct it, could they actually be joined by tubes if they are all unstable at times and not completely stationary.

So my question is, can many rotating space habitats be joined together by tubes or will they not stay still enough for this to be possible?

Presuming your different habitats depend on rotation to establish an equivalent of surface gravity, then your tubes will need to construct using some form of rotary union design, letting each tube to remain relatively stationary with respect to another habit, but permitting each connected habitat to spin on its own axis.

In the image below, taken from a diagram of a rotary union used for fluid transfer between a fixed input and rotating machine, the blue region would be stationary and the grey region would rotate with the bearing (circles in the image) maintaining a dynamic seal. 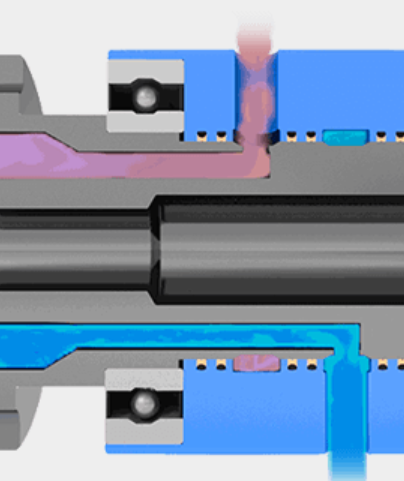 The transit tubes wouldn't need to be fixed or rigid. They could be thin plastic with reinforced ribs for temporary connections. Then they could be more durable for long term connecting conduits.

This means that you can also sort of reverse the joint to create rigid struts -- sort of like a shaft bearing -- that hold the habits in a fixed relationship to each other. Imagine rigid radial spokes with mount points or bearing surfaces that habits are built around. The spokes would provide the basic layout of the space city. More hubs and spokes can be added as the city grows. These wouldn't be constrained by any plane or orientation. -- letting the space city sprawl organically in 3 dimensions, unlike a terrestrial city which sprawls in a plane.

5
Could rotating “sub-cylinders” work on an O'Neill cylinder?

10
Designing cities inside a hollowed-out asteroids
6
Economic systems for micronations in space
1
How tall do atmosphere retaining walls on rotating space habitats need to be?
14
Prevailing winds on a rotating space habitat
7
A self-eclipsing orbital ring
11
Hurricane-force winds or gentle breezes in an O'Neill Cylinder?
1
How massive can a structure get on the inside of a Mckendree cylinder?
6
How to allow a cylindrical habitat (O'Neill or McKendree) to radiate heat to space?
6
Space station scenario feasibility
4
Space station design for long-term safety and durability