What reason would an alien civilization have for building a Dyson Sphere (or Swarm) if cheap Nuclear fusion is available?

The Dyson Dilemma states that every civilization of a great enough development stage will want to capture all of the energy from its home star and surround it with a Dyson Swarm that uses solar panels to capture every last square meter of sunlight. Such a structure should be detectable within 1 kpc and yet our current sky surveys have found bupkis.

Building millions of solar panels in space and dealing with the cosmic rays, solar flares and micrometeorites seems like a real hassle. Having your entire civilization in one location also seems like it would make it vulnerable to interstellar warfare, rogue nanobots, and so on...

On our current technological development timeline, we will have nuclear fusion power well before any Dyson Swarm gets up and running (Decades vs Centuries). The Sun is also extremely inefficient running at 10^4 times slower than any man-made fusion process. It's so slow that, per unit volume, the sun puts out about the same energy as your average compost heap.

A civilization that grows large enough to need a Dyson swarm is going to keep growing to the point where its star's output is no longer fast enough, and it will need to access the hydrogen directly (Starlifting) in order to power all of its fusion reactors.

So why would any alien civilization ever build these Dyson Swarms? 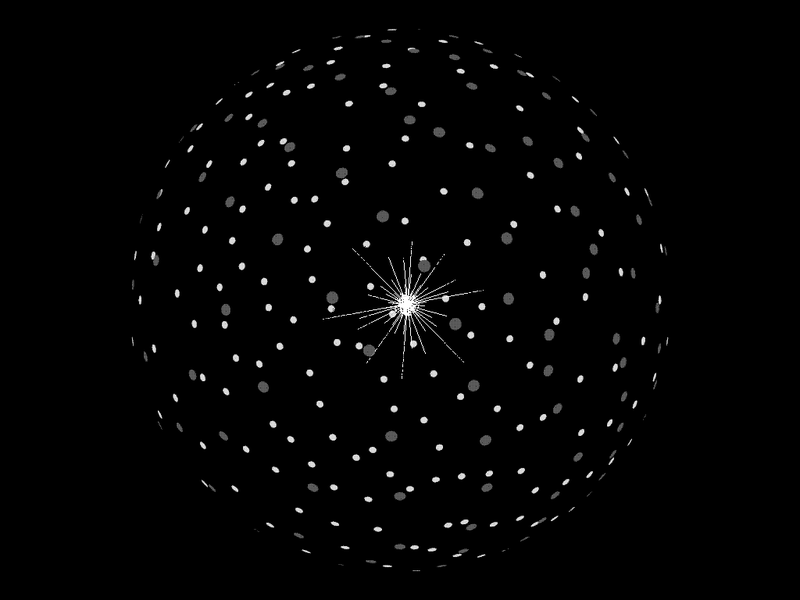 That requires something in the neighborhood of 600 million tonnes of Hydrogen per second.

Getting a similar power from fusion would require a similar consumption of Hydrogen. Even for a culture that could build a Dyson sphere, that's a lot of Hydrogen to get if you are not using a star to do it. Are there ways to get it? Oh, probably. Are they as easy as would be cuddling up to a star? Probably not. One might imagine scooping up interstellar hydrogen, for example. Or vacuuming nearby solar systems.

As to meteorites, they would certainly scour the system they started in. They would want the mass, if nothing else. They might need to scour some nearby systems as well. They might even need to harvest mass from nearby stars, and do some nuclear synthesis.

As to cosmic rays, they will have a huge device from which to project any protective measures. Cosmic rays can be deflected with magnetic fields, for example. One expects there are other ways of dealing with radiation from space that would be discovered.

A Dyson sphere might well be easy to detect during construction, especially as the star's brightness starts to do wacky things. After all, Tabby's Star was pretty exciting for a while. It seems that natural explanations have been found. But for a while, it was tempting to hypothesize that we might have exciting "neighbors."

Once it's constructed it might be a lot harder to detect. It will radiate the same amount of energy but at a much lower temperature than the star inside. I'm not an astronomer, so I could be completely wrong here.

Plus, when you have $3.8 \times 10^{26}$ Watts to play with, you might be able to construct some exciting defense systems. Imagine they could direct some appreciable fraction of their star's solar wind into a beam, just as an example.

Having a culture with a huge number of citizens in one place has interesting possibilities. Imagine, for example, the computer network they could construct. A Dyson sphere with the orbit of the Earth has an area of $2.8 \times 10^{17}$ square km. If you had even one fairly modest CPU in each of those square km, you'd have a truly enormous parallel computer. It's quite difficult to project what you could do with such a system. But it would certainly not be boring.

Your question is like asking "why build an oil power plant with all the related hassle, when we can chop wood and light a fire?".

And a star saves the hassle of harvesting all the fuel, since gravity already did the job.

To power nuclear fusion, you need hydrogen. The overwhelmingly largest hydrogen reservoir in any solar system, and conveniently an already working fusion reactor is its star.

In other words, there is far more energy to collect from a star than you could ever hope to generate in reactors.

So, I'm going to frame challenge this, and say "no alien civilization entirely surrounds their stars with solar collectors."

Here's the thing about a Dyson Swarm: It's not a single massive project that returns nothing until it's complete.

All you need is solar-orbiting structures that (also) collect solar power, and some sort of orbital traffic control. As long as people keep building orbital structures, the power collected by the system increases, and eventually you get a Dyson swarm. No one ever decides one day "we should make a Dyson swarm." Instead they decide to make one (or some other reasonable number) of solar-orbiting structures. They quickly get the benefit of that structure - whether it's a habitat, research structure, manufacturing hub, etc.

This continues until either the unused mass in the system vanishes or the civilization kills itself. Once the unused mass in the system is gone, no more structures will be put around the star. Sure, going to another star is possible, but why bother to ship the mass back? Power is power, regardless of where you get it. Interstellar shipping is expensive in terms of energy. And, as you said, having your entire civilization in one place is a bad idea.

Therefore, advanced alien civilizations put partial Dyson swarms around every star they can get their mitts on. No star is ever fully surrounded.

The commonly given reason for building any version of a Dyson Sphere is because the civilization needs an amount of energy comparable to the output of their star. A Dyson sphere captures a significant fraction of that ouput, and does it more or less passively.

I would posit that a civilization could not create a Dyson sphere without first having fusion (both for electrical/thermal power, and for space propulsion), because of the tremendous amount of matter that needs to be moved around. There comes a time, however, when the materials (copper or superconductor precursors, for instance) to make fusion devices become too scarce, while (presumably) common structural materials are easier to source, and those to make solar collectors are also common.

If all the high quality conductors in the Earth were tied up in fusion generators, it would still be possible to collect more energy from solar emissions, if one could cover enough of the sky -- and eventually, if our civilization lasts long enough, we'll need that energy badly enough to begin construction of a Dyson sphere.

Your civilization has built up its system. It can meet its energy needs through fusion and more esoteric sources. But the sun is aging and as it ages, it becomes brighter.

The civilization does not need all that energy. Really does not need it - it is throwing things out of balance and threatening the habitability of terraformed planets closer to the star.

The answer is to soak up the extra. The Dyson sphere is a defensive maneuver to regulate the output of the star. It is analogous to damming a river - it is nice to have the river by your town but it is also potentially destructive. Its power output must be controlled and channeled.

The Dyson sphere reradiates output to simulate the younger star, and captures and converts the excess. The question of what to do with excess energy is an interesting one. Maybe they convert it back to matter.

They build a Dyson swarm for the same reason they buy a Lamborghini. To show off. To make a statement that they have resources to burn. That cool and awesome are worth more to them than efficiency.

They build a Dyson swarm for the same reason they keep building better weapons. To intimidate their enemies. To say 'Look at this. Do you really want to mess with us when we have this?'

A Dyson sphere's warmth isn't about how hot the sun is, it is about how hot the civilization is. The fact it gets its heat from a star is immaterial -- replace the star with pocket fusion reactors within the 1 AU sized shell, and you get the same thermal profile for the structure as a whole.

Using Energy is generating Entropy, and Entropy leaks as Heat carried by Energy. What matters is how "big" the civilization is (in surface area) and how much Energy it uses.

We are currently small enough (surface of a planet) and poor enough (0.7 K-scale) that we don't show up thermally really. But as we upgrade, unless we inflate, we'll show up as a hot spot.

That sky survey looked for hot spots. There is no Dyson-sphere scale civilization, in surface area and energy budget, within 1 kiloparsec. It doesn't matter if the energy comes from Fusion or from a Star.

For a civilization to be within that range, it has to be significantly poorer than a star's energy budget, or significantly larger in surface area than a 1 AU ball.

It's not about the power, it's about the land-mass. The vast majority of a planet is unusable materials deep underground. If you strip-mined the Earth all the way down to the core, you could stretch it out into a dyson structure that would have hundreds of millions of times the surface area of a spherical planet.

Not the answer you're looking for? Browse other questions tagged reality-check technological-development dyson-spheres .

4
Would a Dyson sphere be useful as a means of power generation?
3
Would it ever be theoretically possible for future humans to prevent the sun from increasing in luminosity to the point of killing all life?

21
Would a Type 2 Kardashev Civilization really build a Dyson Sphere around their own sun?
9
Is A Solar Dyson Sphere Habitable?
3
Can we use CME or solar flare to power spacecraft?
5
How long does a component of a Dyson swarm spend in shadow?
2
Logical reasons for Forgoing a Dyson Swarm
3
What could exist inside and between the walls of a Dyson Sphere?
9
How would a Dyson Swarm transmit energy to the Earth?
4
How fast could we build a Dyson Swarm?
0
Is this scenario possible? How can it be done?-Dyson sphere replaced by gas giant star