How would Roadhog’s Scrapgun work?

this is my first question here. I’ve wondered about this for a while, and the original idea wasn’t on Roadhog’s gun but I thought it similar enough for this question.

So, the Scrapgun. A very short and wide double barrelled break-action shotgun that uses partially melted scrap as ammunition. There are three parts to how this would work that I would like to know.

How the scrap is partially melted and isn’t falling out of the barrels. (I’ve come up with induction heating coils in both barrels powered by a handwavium battery. These coils can heat the scrap up to 815 degrees Celsius very fast. https://hackaday.com/2015/10/23/a-small-1000w-induction-heater/ The scrap would be held by friction and being partially melted would stick together. Unfortunately firing it might damage the coils or other problems might arise.)

How the partially melted scrap is fired. (I thought if we were going to use a handwavium battery we might as well have a rail gun but I don’t know how that would work with the induction coils and whether it would fire like a shotgun like I want it to or in a straight line. Perhaps when you break it open to reload it you put a gunpowder charge at the back?)

And finally, how much damage could this abomination do it if it worked and were to fire at someone.

I know this is more than one question but they are all connected and are really just one big question with three parts. 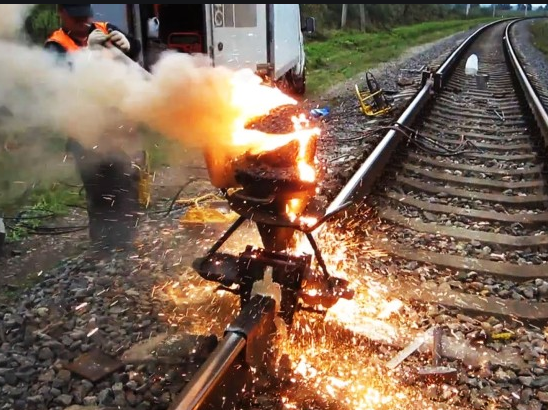 Thermite is a mix of ferrous oxide, so you could add scrap iron on it. It releases soo much heat that the railroads are bound with the extreme exhotermic reaction.

If you scrapgun shoots cases with thermite, your handwavium wouldn't be the battery, but the composition of the barrel. Maybe tugsten or ceramic in order to endure the incredible temperature.

The shortness of the barrels would mean the effective range of the weapon would be very short. It would be more like a sawn off shotgun or at very short barrel length more a directed grenade than a gun. Hopeless at long range, but at short range and with sufficient propulsive force such a weapon would be lethal over a broad arc.

The scrap could be mixed in a mould with a small quantity of any old binding agent. Some weak glue, clay or mud perhaps this is then crushed into a large slug. A waste paper roll is crimped at one end and filled with black powder and the slug added to it.

If this is some sort of electric weapon as the OP seems to indicate (this isn't very clear), then any metalic scrap or projectiles would be rapidly subjected to induction heating in a rail or coilgun.

The shot would be held inside some sort of non conductive sabot (which would happen normally), with only metal rings or a base to provide contacts for the electric arc or "grip" for the magnetic coils to act upon. The heat of the plasma pushing a railgun projectile down the barrels, or the inductive heating by passing through alternating magnetic fields will bring the shot up to temperature fairly quickly, and when the sabot falls away, the projectiles than spread outwards in a (literal) cone of fire.

Not the answer you're looking for? Browse other questions tagged science-based technology weapons .

2
How effective would a mini rail gun be?
12
How could you make a bullet that disappears entirely after impact (like ice maybe)?
5
How would a chemically powered gun work?
1
Hand Held Coil Gun cannon - Enough to rip a giant robot limbs into pieces
3
Justification for Gatling type Coil Gun
2
How powerful can a handheld laser be?
10
Would shotguns be a practical weapon to arm certain members of an anti-zombie military unit?
2
Would this giant rotating shotgun weapon be effective?
10
Are AP slugs for shotguns possible?