Would this giant rotating shotgun weapon be effective?

TL;DR; Just a random idea I had, but would a giant rotating shotgun-type weapon be effective?

I had this crazy/stupid/possibly-been-done-before/very-dangerous/probably-all-of-the-above idea. I have one quick sketch of the weapon but if you can't see it will or something I'm gonna try to describe this as best I can. 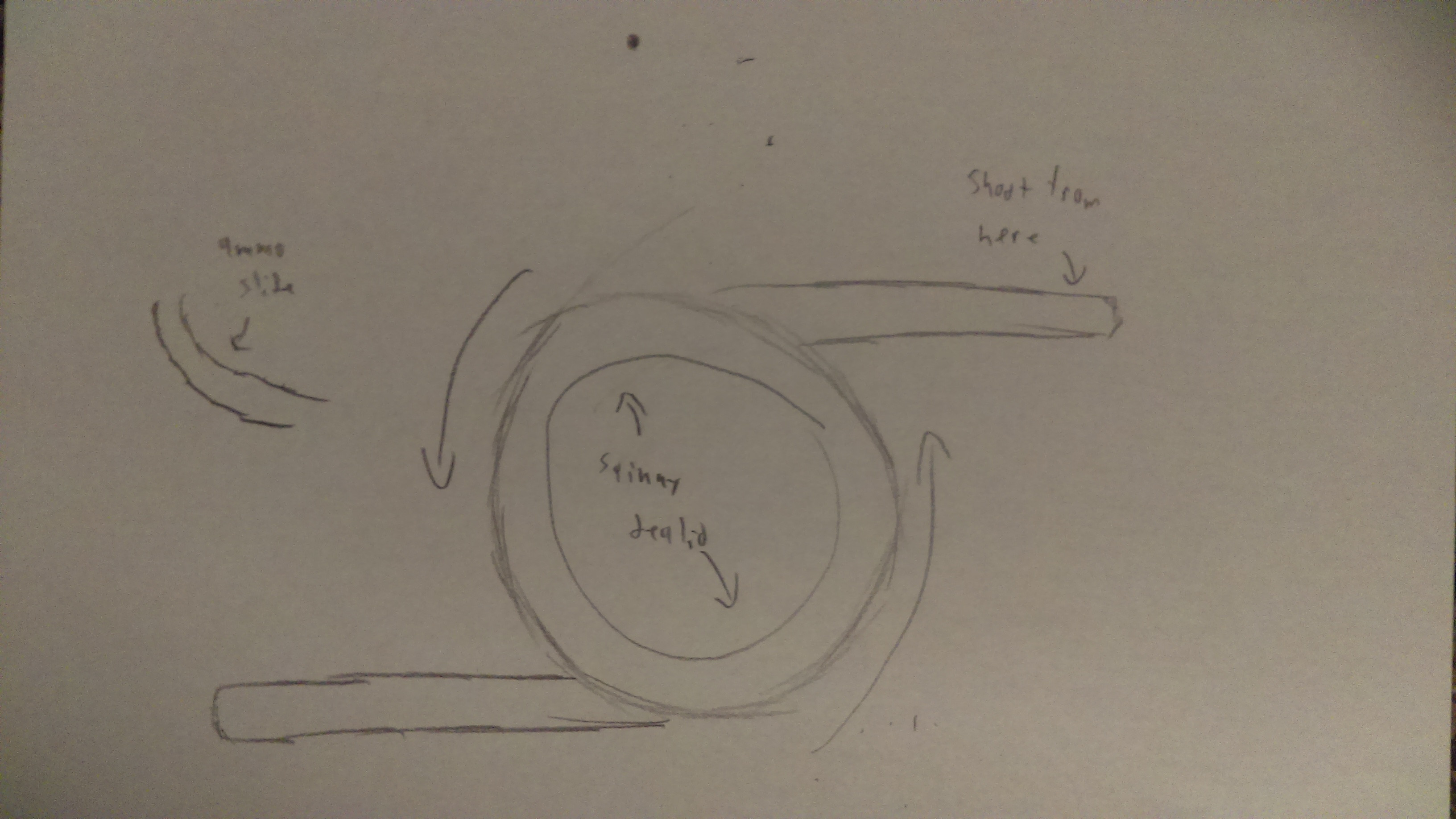 I was kinda imagining that this would be on the side of tanks or walking mechs or really deformed helicopters, and maybe a sort of support artillery unit. The concept could be used for quickly reloading mortars, RPGs, AA flak, or pretty much anything with a little bit of tweaking.

Take a 102/35 on SPA9000 and replace the gun part with this shotgun thing, add a shield in front, have the gunner stand to the side of it, and bam, light shotgun truck thing. Of course you would use whatever military vehicle is around at the time, this just already looked mostly like this idea.

Grab a tank, slap this on either side with whatever ammo or variation you want, and all done. Just point and blam, no more people in that direction.

Take the first variation, angle the shotgun thingy upwards(but keep the ammo rack and pegs in the same spot), fill with AA flak ammo, and use as AA flak cannon.

Slap on either side of a helicopter, angle slightly downwards for anti-ground, or keep level for air-air dogfights

Could possibly be a gun on a bomber, take first variation and stick it in a big plane.

Quite a bit of others, but I'm not sure how to do fighter planes tho. Suggestions would be welcome.

I feel like this leaves the weapon rather exposed as it has to be mounted on the side and has to rotate freely, which can be easily jammed by body parts, random debris, etc. You could probably put an armor plate on the out side, but you have to leave a channel for the weapon to rotate freely.

Also, this seems fun and all, but there's already machine guns which fire pretty quickly already, so this thing might not be needed at all. Even if you rig it to shoot giant anti-tank projectiles, you would run out of ammo rather quickly, and if your good you only need 1-2 shots, not a rapid fire 20 shots.

And it really sounds like I'm just reinventing the Gatling gun, just in a very roundabout and possibly cooler looking and/or less effective way.

Would a design such as this be a viable design for any type of weapon(handheld, emplacement, or mounted vehicle)?

If this has been done before, please let me know and maybe link to it. I don't really care about the time frame it would be useful at, it could be anywhere from near-future to whenever disintegrating ammo chains and guns came around, just wondering if it's a decent design that could be effective.

Effective- technically yes as it can be very destructive to a target. Any form of a rapid-fire weapon is always effective. But, you will probably have the issue of overheating barrels as they tend to get hot.

A good idea- Probably not. The thing is that there are already drum shotguns and Gatling guns that do basically the same thing but without being a nightmare to reload or be nearly as bulky, and as before mentioned, won't have the barrel overheating issue.

Conclusion- Yes it would be effective. But you probably shouldn't use it. As there are way better options available that will work so much better than your idea. You could probably mount it horizontally on the top of a tank or military vehicle. But otherwise, not super practical.

Edit: It might be a better design to use more than 2 barrels. As more barrels mean less overheating and since your design would have to be mounted, more barrels wouldn't cause a size issue. It would still be a nightmare to load though

4
A weapon of maximum fluidity
19
Can one Battlestar conquer Earth?
2
Supernova Rifle
3
Does the growth of ecommerce diminish our ability to wage total war?
9
Would this "self driving" car work?
2
Why would rapid-fire firearms do less damage than slower-firing ones?
10
Black powder machine gun in an airplane
11
Are AP slugs for shotguns possible?
1
Would gauntlets with claws be an effective weapon?