Could a non sentient land animal evolve an innate knowledge for making boats?

I'd argue that beavers, e.g., do not innately how "how to build a lodge". Rather, they innately know how to cut down trees, move them and shape them into dams, lodges, etc. I do not believe they are sentient creatures (in the usual sense of def. 2) and thus have no concept of structures and no means of communicating plans, designs, skills or novel adjustments to technique. In other words, they don't know what they're doing; they just know to do what they're doing.

I'd argue that a land animal could evolve to craft a crude boat-like-object. Something like dugout canoe could easily be made by a creature not at all unlike our happy dam building beavers. It's just a matter of applying their teeth to the job.

Most importantly of all, most of these things would require them to innately know how to make and use a language through which they can communicate all these high level technologies and coordinated actions.

There are quite a few birds which build floating nests. Those nests are more in the nature of rafts than boats, but maybe that's enough.

In a second addition, floating nests made of foam are not uncommon among fishes and amphibians. 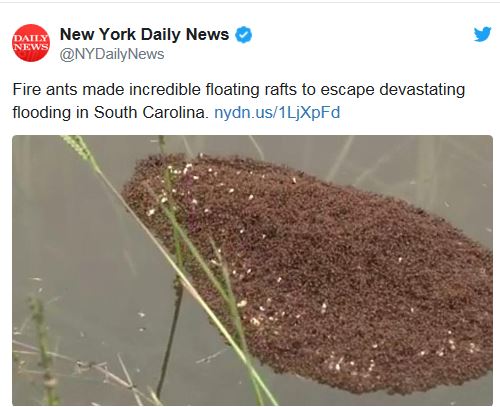 Fire ants instinctively build a raft of their own bodies to survive flood. They also instinctively make towers. The linked articles describes researchers who derived rules of behavior describing how ants, which know nothing, can instinctively behave in response to a stimulus so that these impressive emergent mass behaviors can occur. Such behaviors evolve because the emergent mass behavior is adaptive for the colony as a whole - the social insect innovation that has allowed ants to conquer the world.

Perhaps the most remarkable implication of this research is that the ants don’t have to “know” whether they are all behaving the same way. Apparently they follow the same simple rules of movement: If ants are moving above you, remain in place. If not, move randomly, and stop only if you reach an unoccupied space adjacent to at least one stationary ant.

Once the tower is built, the ants circulate through it while preserving its shape. We were surprised; we thought the ants would stop building their tower once its height was maximal. Previously, when we studied the ant raft, we were surprised in the opposite way. We thought the ants would circulate through the raft so as to take turns being underwater on the bottom. Instead, ants on the bottom can stay in place for weeks.

I do not know if the ants can pilot their rafts, but it would not surprise me. It would be the same sort of emergent behavior.
For example:

IF ant is on top of raft AND ant sees dry land, THEN ant moves towards edge of the raft nearest to dry land. The result is the whole raft generally moving towards the sighted land.

In addition to what @elemtilas has said, the development of animal skills such as nest building through evolution has to serve a purpose in the species' survival that cannot be reached more easily otherwise. For example, the nest in a tree keeps the eggs warm and safe in a way that no other behavior can in a similarly efficient manner.

So what evolutionary purpose might building a sailing boat accomplish?

It could get the animal to a place with more food or to a safe habitation accross the water.

But is developing the skill to build a sailing boat the easiest way to get accross the water to more food or a safe nest?

Certainly not. Animals that needed to cross the water evolutionarily have developed the skill to either swim or fly. In fact, almost all mammals already know how to swim (apes being the only exception). Apparently developing these abilities was easier or quicker for nature to accomplish, or we would have sailboat building non-sapient animals on Earth.

Starting with the conceit that you meant sapient instead of sentient - here's my idea. First, it depends on the physical properties of your world. This will probably only work on a planet of many small islands, separated by a greater distance than can be easily flown by most birds/flying reptiles/squirrels what-have-you.

This all starts with a small herbivore who builds nests out of small branches/logs and mud or self expressed resin. Could be beavers or bugs, doesn't particularly matter. But because of the makeup of the world - there aren't many large lakes for them to make their nests in, so they evolve to anchor their nests to rocks exposed by low tides, slightly off the coast of the islands. Maybe they build conically up from the rocks, maybe they use a biological mechanism to secure the nests so they are anchored, maybe they just build them up big enough that they stick up out of the water.

Regardless, these nests happen. I personally like to envision them as conical beaver lodges, because I like beavers.

So, these nests are built up around the islands that the creatures are native to. There are birds that can fly between islands, spreading flora and whatnot in their droppings. But not all the birds can do so. So the birds only capable of shorter flights begin to colonize the larger nests, building their nests on top of the beaver nests. This keeps them safe from carnivores, and is a benevolent sort of parasitism. Well, these birds are seed eaters. They feed from various plants and in the fullness of time, a particularly broad leafed tree gets it's seeds mixed in. The birds deposit some of those seeds while nest building on one of the island nests, and what do you know, the tree takes root. As it grows, the prevailing winds break it's bonds to the rocks - sending nest and tree off into the unknown.

The colony of beavers is stuck, the birds are stuck, and the tree is pretty obviously stuck. So the winds take this makeshift boat over time onto virgin shores, where the beavers are wildly successful, the birds are wildly successful, and the trees... well they do okay too. Eventually through self selection we develop a subrace of beavers who build weaker bonds, then eventually no bonds, because these birds are now widespread enough that their floating nests will be colonized and en-sailed. This allows new colonies to constantly form and drift around until they hit land, feast, and rebuild.

Not the answer you're looking for? Browse other questions tagged science-based biology evolution fauna transportation or ask your own question.

59
A Bird that Never Touches Ground
5
Could an animal species evolve to use electricity?
5
Creating a fully aquatic bird
8
How can a vertebrate animal evolve for extended flight before living on land?
7
Vocal hardware required for a single creature to communicate with any land animal?
17
How to make a bear resistant to Medieval weaponry?
7
Post nuclear apocalypse fauna
7
How Would Weightless Creature Steer Itself In The Air? (Can It Sail?)
6
How could a non round land creature puff up like a balloon?
4
How could exist and how be the lifestyle of a living raft biome?