How Would Weightless Creature Steer Itself In The Air? (Can It Sail?)

Gravity does exist in this world, and so does air and clouds. But this creature only has enough weight to stay in the air without falling or being lifted up. It's big like a whale and it does have mass as in it takes much force to accelerate it in any direction. So it's like in outer space but it's on the planet. It doesn't need to worry about falling or flapping its wings to stay up and stuff like that. It might look different than birds.

I was thinking of giving it appendages that it can use to sail in the air like a boat but I don't know much about sailing and I don't know how that would work in 3D (how does it go up for example?) Although I know sailing can go windward. I know I'm already breaking the laws of physics here but I still want to make it's biology realistic. Maybe no propellers or stuff like that because we don't really see big animals in the real world having anything that rotates like a propeller. If the sail idea requires the creature to be too mechanical like something a man made machine can do then I don't want it. Is a sail viable? Do you have alternatives if it's not?

Steering in air works mostly on the same principles as steering underwater. You deflect the fluid to one direction with a surface, the incoming fluid pushes the surface the other way.

Notice that some zeppelins float by a principle similar to your creature (being very light so that it floats without need for thrust). In many designs, they have control surfaces which can be used to help steering, such as this tail vane: 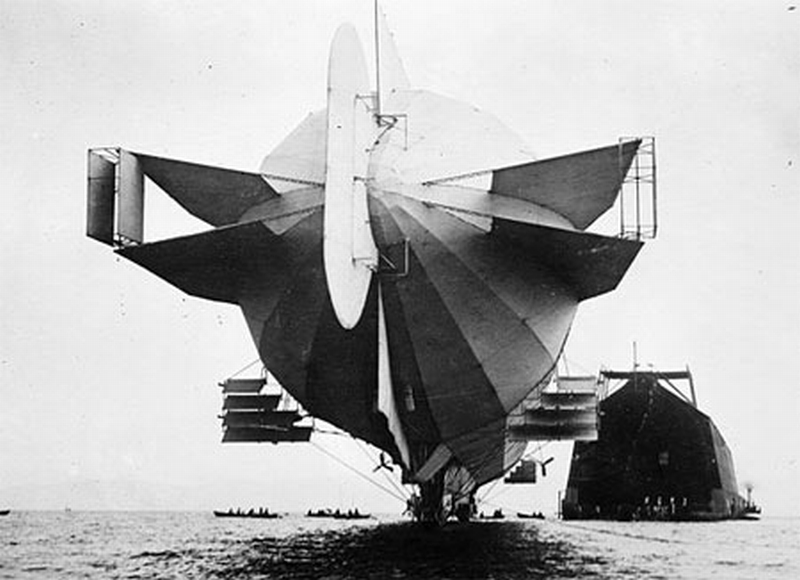 If your creature is able to go against the wind, or to propel itself, then it can maneuver like an airplane or a glider. Otherwise, if it does just sail, then check how ships do. Ships have a keel for stability and a rudder which acts like a tail vane underwater.

Your creature will float along with the air mass like a hot air balloon, and therefore won't see any 'wind' to sail against.

Here's a suggestion for how the creature could work: It has the ability to generate a very light gas like hydrogen, which it uses to fill flotation bladders. When it wants to go down, it constricts its muscles around the bladder, compressing the hydrogen. As it does, the volume is replaced by air around the hydrogen bladder, reducing the overall lift of the creature.

To move against the wind, it has to dive down, picking up speed. If it has enough lift (even just from its body, which could act like a lifting body), it can translate downward speed into forward velocity. Then at a lower level it allows the hydrogen bladder to expand again, making it float.

To further improve its ability to navigate, it would take advantage of the fact that the wind changes direction and speed with altitude, like hot air balloon pilots do. So this thing would be constantly changing its shape to move it from air mass to air mass, choosing the ones that get it where it wants to go with minimum energy. It would be constantly climbing and diving, only staying motionless in the air when the air mass is going in exactly the right direction.

Your creature can look like fish (or whale), they even have toys work in the same way: https://www.youtube.com/watch?v=hEsOPZDwA0E
(and it is cheap enough to be available at Walmart)

That toy is basically an small airship, using a helium baloon as the main body. Your (biologic creature can produce methane instead. The toy flaps its tail to move forward, and yuoru creature can do the same. Toy uses movable weights and fins to change direction, and a biological creature can to the same.

Just like fish struggle to swim against strong current, your creature will struggle to move against the wind. But it really depends on strength of the wind.

"Sailing" will be tricky b/c sailboats use water resistance (against rudder) to maintain direction. Your flying creature can maybe change its shape a bit if it wants to fly with the wind (round like a ball) or against it (long like a hot-dog)

Yes, it can sail, but only if it is Very Big.

Sailing, particularly sailing against the wind, depends on exploiting the difference in velocity between two media: the air, and the water. The wind pushes your sails one way, the water pushes the rudder and keel in different ways, you can control exactly how you get pushed by turning the rudder / trimming the sails, and the vector sum of those pushes from different media determines your ultimate direction.

For a creature floating in air to sail, it would need to be able to exploit wind shear across different layers on the atmosphere. That means it needs to be Really Big, so it can extend control surfaces (sails and rudders) into air streams moving in different directions at different altitudes. If it is too small, it will be limited to simply being blown along in whatever direction the wind at its altitude happens to be going, like a hot air balloon--and like a hot air balloon, its navigation abilities will be limited to finding an altitude at which the wind is blowing in close to the right direction, by carefully controlling its buoyancy.

Go like jellyfish, which are mostly carried by water currents (it would be wind in your case) but which, contracting and expanding their body and expelling water (air in your case) can get some mobility.

Not the answer you're looking for? Browse other questions tagged reality-check biology creature-design .

23
Sea creature moving via rotational motions
6
Great Flying Cthulhu
5
How to perfect the "Great, Soft Jelly Thing" - A creature incapable of self-harm
13
How would or could a creature with a crystalline sail evolve?
30
Living biological boats? (Jasconius)
9
How viable is a creature that floats through the air like a living hot air balloon
7
Anatomically Correct Propellers
3
What organs or modifications would be needed to have creature that can eat/digest hair?
6
Explaining Alien Monsters: Gargoyles