How could exist and how be the lifestyle of a living raft biome?

Raft biome consists of a trunk or a group of plants that float in the sea and cant transports little animals like reptiles, birds, bugs or rodents, with this method many species can travel large distances and populate new lands, but the question is if its possible the existance of an animal that can fulfill this roll, rememring legends of living island (or islot), is not necesary biblical size, maybe just 10 meters (till 20m), but I dont know if its possible, because an animal needs move around feeds itself, and it implies violent moves, and swim on surface needs more energy and why other animals would be willing to live there, or how could live there.

So I thought in animals that can fulfill this function getting a symbiosis or comensalism advantage, but Im not convinced, a jelly fish like the man-o-war , like the ocean phantom, but can transport plants and cant travel far from coral reefs, a great filter, whales or speculative the balaenateuthia (https://speculativeevolution.fandom.com/wiki/Spec:_Balaenateuthia). And maybe turtles can develop a dome or pot shell.

Something like a squid or cuttlefish, because I remember that saw an speculative squid with boat form. Just Im sure that this animal needs a slower metabolism, a migratory pattern that make necesary get closer to islands, coast cliffs, mangorves swamps or great rivers or lakes connected to the ocean, and the most important a reason to swim near the surface all or almost the time.

Also I thought in the spinosaurus, but obviously the neural spine its not like a boat sail, but a double or triple spine could support little animals inside but again Im not sure if its possible and I dont know how could develop a symbiosis, but its the only one that I thought could get the size, breeding and migratory patterns for this. 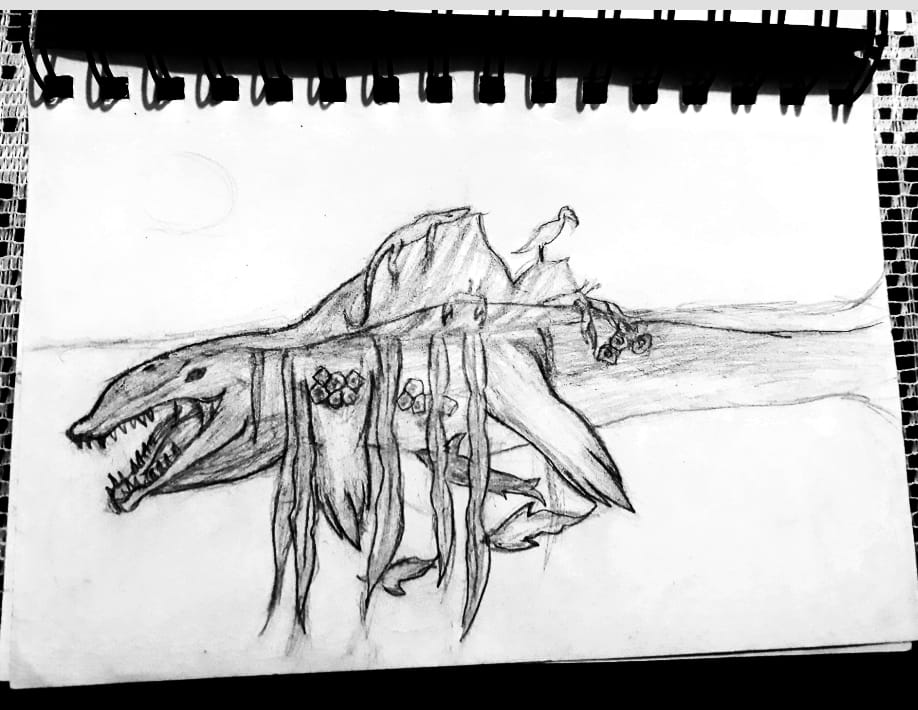 Also there are many problems with an animal that needs to spend much time near to the surface with a big body surface out water for support other organisms, like what types of moves that need to do, displacement that could be viable because stay as boat and break the waves needs high amounts of energy what is in conflict with the eating behavior that this animal may have to dive and get all the necesary aliment.

How I mentioned, this biome is made with logs, vines or other stacked plants, initially I didnt considered fungi or plants for fulfill this "niche", because an animal that control its movements its more interesting for me than just float impulsed by the waves, but a giant lily pad-like gridle also could be interesting.

The question is why it would be advantageous for the creature(s) to become a raft. If it's a raft without advantage, it'll only consume energy for being a raft, or even get used as a food source.

The easy answer is that being a part of a raft can provide nutrition to the creature(s). The life that'll thrive above can provide food by attracting birds and fish that want to get some food, as well as the life on top. The debris used for a raft can also provide some shelter against the elements and predation, allowing it to survive even better.

The creature itself could be a raft, but this isn't advantageous. It'll support less life and might've to offer some of it's own body as nutrition to the life on top. That is why the creature can gather debris in the ocean for extra surface space, protection and nutrients.

Groups of these creatures could band together for tiny floating islands where creatures will live. Much like the corals it'll attract all sorts of creatures, making it a small thriving eco system.

I would propose a form of man-o-war that gather the debris and form these islands. The thiving wildlife will provide them plentiful. If the need for self propelled creatures is required, it isn't a stretch that with abundant nutrients they form a propelling force to stay in advantageous waters. Possibly a sort of surface squid with tentacles long enough to grab food.

The only creature biome would be near impossible. The fauna and flora on top would quickly turn parasitic. Unless it could turn the above into an advantageous strategy, I think it unlikely. Maybe a whale with a hard shell on top and stinging tentacles below? Again, creating a small biome might attract enough food, but the requirement not to dive will make food foraging with tentacles nearly mandatory for enough food "range".

Lets work this out what has to be true.

You creature cannot be a active-predator, it would spend too much time diving. It either has to be a filter feeding or use passive engagement like a man o war. An active predator large enough would have to be hunting constantly.

It should be ectothermic, endothermy requires too much energy to support a large passive animal.

It needs to not be bother by plants and animals on its back, so you don't want skin preferably a hard shell like a turtle or ammonite. Now huge ammonites 3-4 meters across have existed so you have a starting place, making them drift feeders is not impossible.

Brandon Sanderson had his Santhids 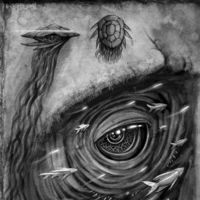 a few fantasy artists have made convincing ammonite islands. 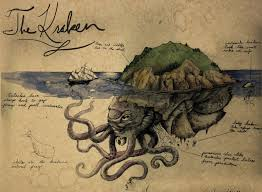 More than one animal

You could alternatively have a community animals like a man-o-war or even like coral. You just need a coral that flats when dead and it will grow like and island. eventually storms will break it up so it will never get too large. the problem with a man-o-war is above a certain sizer the stuff in the middle is not getting any food so they would not be able to get very large but you could combine them with floating plants for a hybrid complex.

Let me leave you with one more idea I have used in an RPG, island making ants, ant that build islands out of debris. First ants do some crazy stuff so ants building small islands is not too far fetched. and mangroves swamps give oppurtunities for a middle ground for this to evolve in. They build nests in a way similar to arboreal ants by gluing material together. they would be able to actively maintain such islands. Now to work your ants need to be able to swim otherwise they starve but they can mostly live on farmed crops like plants or fungus. Attracting other living thigs wild help give them protection and supply fertilizer for the fungus, mutualism with sea birds might work. feathers for building and poop for fertilizer. Works really well in gyres where there is a lot of material available. Now these islands will very be that large, ship sized at the largest.

Of course you can always combine these ideas, floating coral farmed by crabs or ants would be believable.

Not the answer you're looking for? Browse other questions tagged biology evolution fauna dinosaurs sea-creatures .

5
How to construct floating (on water) plant-based island?

10
How long could life survive The Night?
18
What underwater creature would be well-suited as a pack animal?
30
Living biological boats? (Jasconius)
5
Can land-living endotherms exist without hair, feathers, scales etc.?
4
How many people can a sealed 3x1x1 km biome support?
7
Can the cobra hood ribs turn to and be used as functional "pseudo-limbs"?
1
Could whale-sized creatures propel themselves through the sea by expelling water like a cephalopod?
14
A semi-plausible planimal?