There are several previous questions concerning concentric shells. I won't reference them here because this is different.

I understand that there is no gravitational effect inside a concentric shell*. But what about a non-concentric one? 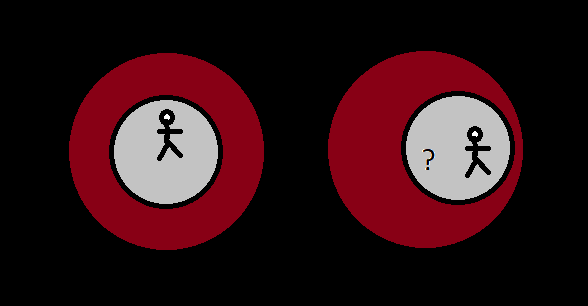 I'd like to have a cavity inside a small planet. Assuming perfect spheres and uniform density, is there a general equation for the gravitational field inside the cavity, taking into account:

If no exact solution exists, is there an approximate formula that will let me play with the variables to get a rough idea of the effects?

The solution isn't actually too bad; I had this as a problem in AP physics in high school. It doesn't have as much symmetry to exploit as a concentric shell, but it still has a lot of symmetry--as long as the cave and the enclosing body are both spheres, and the enclosing body has uniform density, you can treat everything as rotationally symmetric around the line connecting their centers.

Because of the rotational symmetry, we can reduce the problem to two dimensions to show that the field is in fact constant everywhere in the cave.

So, the total gravity is axis-aligned, constant, and dependent only on the density of the enclosing sphere and the eccentric distance. This is in fact the only way I know of to get an exact constant, uniform gravitational field with finite amounts of material (the infinite option being the space above an infinite plane).

Not the answer you're looking for? Browse other questions tagged planets physics hard-science gravity caves .

29
How can I estimate how far into a cave network breathing is possible?
10
How can I generate electricity inside a cave network?
2
Is it possible to create a consistent timer using only gravity?
9
Gravity on a hollow non-enclosed world
9
Is it possible to have an underground swamp inside a cave?
9
Non-Spin Artificial Gravity
42
Could a cave-in or avalanche in low gravity be dangerous?
11
Simulating Cave Formations
12
Delta-v budgets and modified gravity
1
Determining maximum cave depth