The acceleration $g$ experienced by an object of negligible mass can be modeled with:

1If you follow the math through, the gravitational forces below the surface oscillate with exponentially greater magnitudes, which would obviously rip a planet to bits. So, the formula is only good for gravity above the surface. Below, a different (and unimportant) set of rules apply.

$e^{-\lambda du}$ and $\cos(du)$ are dimensionless, leaving the result in the units of $m/s/s$. Multiplying the result by the object's mass gives force applied to the object, which may be positive or negative.

Because this is Worldbuilding, a lot of these parameters are toggleable and don't (seem to) arise from fundamental interactions. This is okay, I think. I don't need to fully flesh out and justify why these constants are what I choose them to be (or even why gravity is different), I can simply tuck them away to a black corner and work with their output.

There are some strange properties with this form of gravitation. Here's a graph: 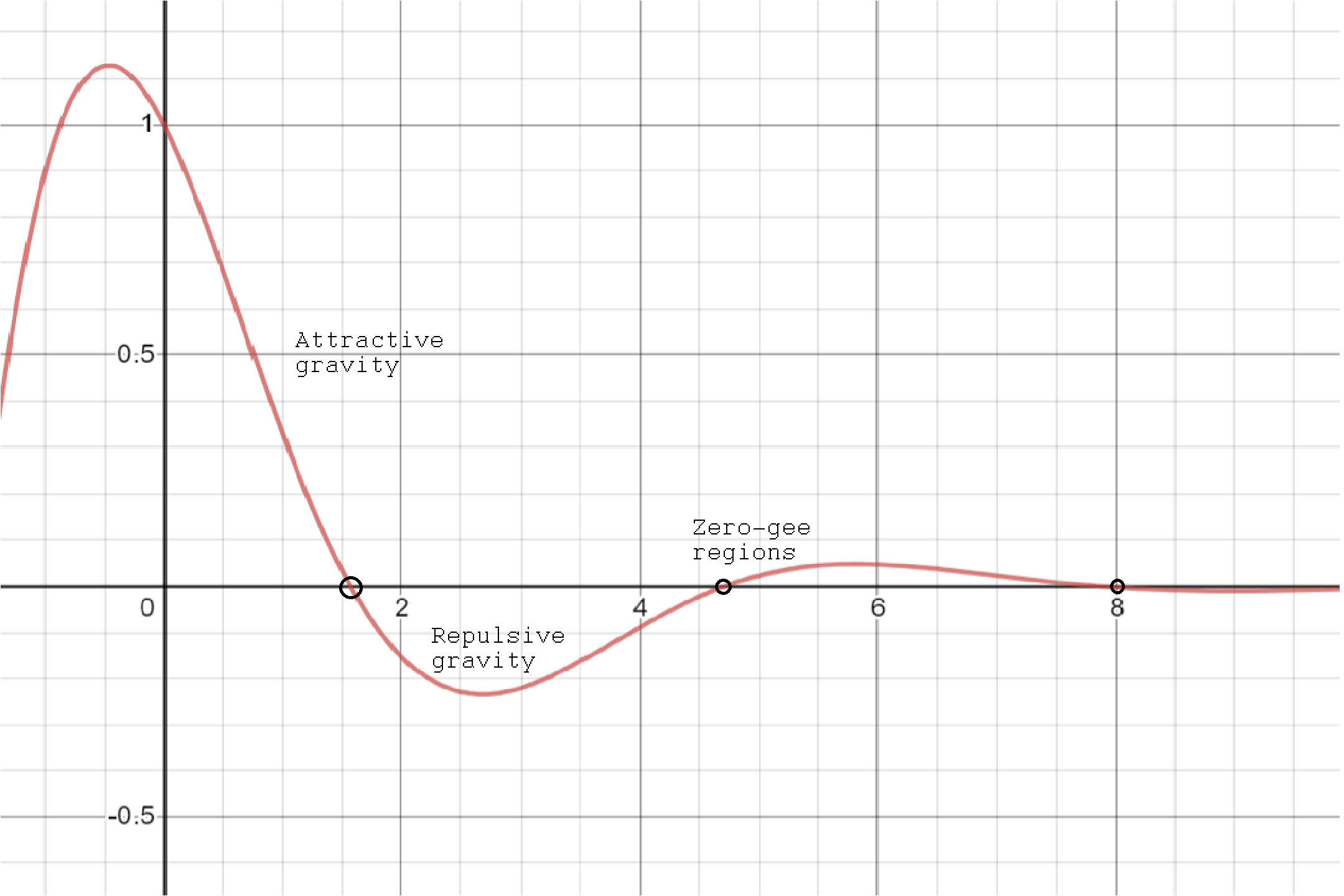 As an object rises above the surface, gravitational acceleration drops until, at some distance $\pi /u$, acceleration becomes zero and inverts, turning repulsive. The force vectors point away from the planet surface and the object is accelerated away until it crosses the recurring zero-g point and begins decelerating.
However, because the distance over which acceleration/deceleration occurs is constant and the magnitude of acceleration/deceleration always decreases, a non-propulsive object will always accelerate away from the planet--forever--once it has crossed the initial zero-g point above the planet's surface. To even approach the planet, an object must have some minimum "entry velocity." 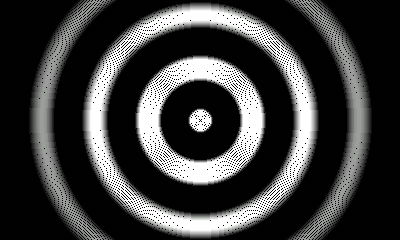 Gravity oscillates between positive and negative, attractive and repulsive. (In the graph, attractive regions are solid.) Stable orbits seem to come in two varieties: orbits that remain solely inside attractive regions (largely circular), and orbits that oscillate between attractive and repulsive regions (largely sinusoidal). Highly elliptical orbits are impossible; if an object has enough orbital energy to cross more than one zero-g point, it'll be ejected from the system. Trajectories that nearly cross a second zero-g point are "critical." 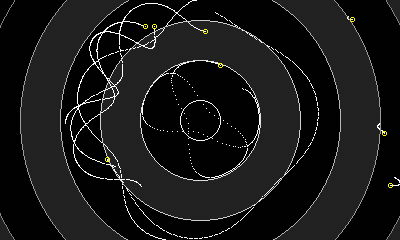 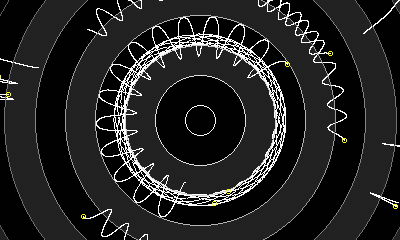 (Attractive regions in black, repulsive in dark grey. Paths traced w.r.t non-rotating body at the center.)
Here we see an object (second image) on a critically oscillating trajectory, falling toward the planet though not having enough kinetic energy to overcome the repulsive region and being accelerated back out--though not great enough to enter the second repulsive region--ad infinitum. Tangential velocity seems almost independent of radial, meaning two objects can share an orbital region and yet have wildly different velocities compared to one another. Hence the thicker band of traced orbits (representing faster motion) within the larger, slower, more sparse trajectory.

Stable orbits only exist inside attractive regions, where the force vectors point toward the planet. Circular trajectories in these regions can have wildly different orbital velocities due to the large gravity gradient. At the peak of the region, where the force vector is strongest, orbital velocity is highest, whereas to either side of the peak, velocities decrease and approach zero. Geosynchronous trajectories are not limited to the space of the zero-g regions, but may also oscillate between attractive and repulsive regions. On the planet surface, this would look like a satellite growing nearer and farther (in the same position or along a figure-eight path) throughout the day. 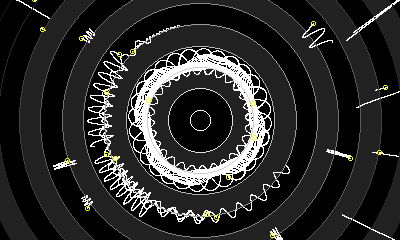 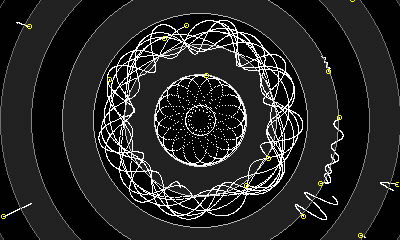 Near the higher orbits are a few synchronous trajectories, almost "bouncing in place."

What I'm having trouble with

I think my trouble is mostly a mathematical one (I know about as much mathematics as an intermediate programmer should, but not enough to analyze and derive the equations I need to answer my own question, I guess).
I'd like my travelers to explore such objects, and although the properties of this gravity system are magical, the travelers themselves are constrained by the Tsiolkovsky rocket equation.
What I need is a method for computing delta-v budgets respecting the modified gravity.

Say my travelers wish to rocket off the planet to some altitude above the surface (suppose there's no atmosphere). They'd need a method to figure how much delta-v is required to get there (which likely involves slowing down at "there", as the repulsive regions will work to accelerate them out of the system), as well as how much delta-v they'd need to get back. Remember, the repulsive regions will assist them in getting off the planet (and maybe even a little with circularizing their orbit), but they'll be fighting those same regions on the way back down.
Perhaps the problem put into simplest terms would be figuring out how much delta-v is required to move radially from one region--repulsive or attractive--to any other. I am not sure how tangential velocities would figure into the mix.
For the sake of simplicity, we're only worried about coplanar changes in trajectory.

I think you'll need to re-formulate the vis-viva equations. Let's try that out and see what happens :

So, with a little more confidence, let's try applying this to...

Testing again, still using Earth, and trying an elliptical orbit where the major axis is equal to R (a circular orbit) : 7,855 m/s ... just what I'd expect from a circular orbit.

And circularizing the new orbit

Then, placing back into the escape velocity equation

Dropping m, and solving for $v_e$

I think I might be close to an answer, but I'm not entirely sure. At the very least, this may help someone towards a more complete answer.
Originally, I thought to integrate my modified gravitational acceleration formula

over the dimension $d$, which is distance in meters. I couldn't make sense of the return of that (I thought it might be useful for finding velocity), so I went ahead with this question, but now I think I have a little better of an understanding of what that result might've been.

$v_i$ is the "initial velocity." When set to the minimum of the graph along the positive x-axis, the entire velocity graph lies above the x-axis, which I believe means that the minimum value is the "entry velocity" required of an object starting at infinity to reach $d=0$.

The equation for gravitational acceleration in red (y-values bloated by a factor of 20,000 for visibility), the integration of that equation in blue.

If the object has less than the entry velocity, then the object's velocity at the final zero-g point is negative, which I interpreted as the object not having enough energy to surpass it and being thrust back whence it came. Following the plot backward, we should find the minimum velocity for an object at each step required to fully escape the planet. That energy seems to be given to the object right after it surpasses the first zero-g point.

12
Can a moon "skim" a ring?
10
How would this tidally locked planet be affected by its moon and would the moon have a deaccelerated orbit?
56
Is it possible to have a planetary system with planets having perfectly synchronized orbits?
111
Would planets be cubic in my "cuboverse"?
2
What is the highest theoretical escape velocity a 2 billion metric ton vehicle can achieve using a >20° gravitational slingshot?
1
How long would a planet that losses its gravity take to break up?
4
Precise localization of another ship in a Orbit-to-Orbit scenario
4
How would a spaceship not affected by gravity navigate between planets?
4
Possible deltaV savings by usage of Lagrange points in intra-solar transit